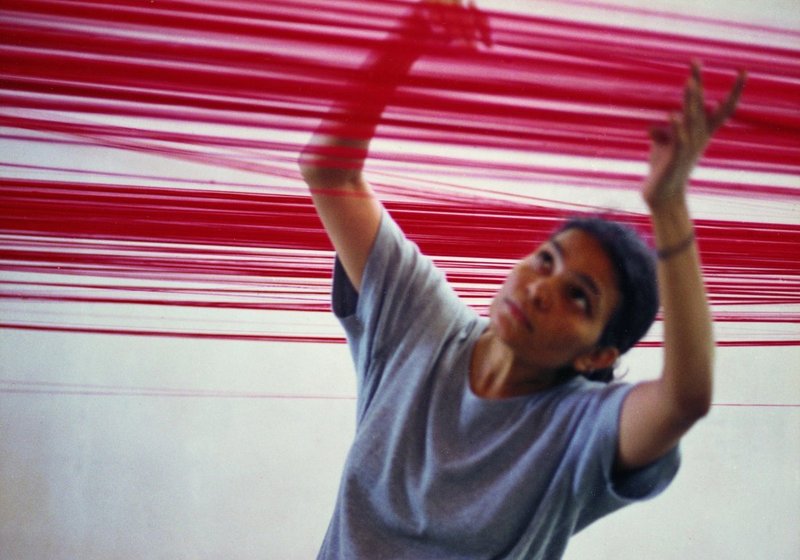 Sheela Gowda (b. 1957 in Bhadravati, India) lives and works in Bangalore. She studied Painting in Bangalore and London. For her sculptures and installations, Sheela Gowda uses materials that, due to their consistency, color, and odor, create a narrative atmosphere and concomitantly unfold metaphorical power. Materials such as cow dung, kumkuma powder, incense, and coconut fibers, as well as hairs, needles, and threads combine connotations of everyday use with a poetic charge and refer to urban and rural life in India. Before Sheela Gowda turned to installations and sculpture in a minimalist formal language in the 1990s, she worked with expressive oil painting, in which her later themes were already laid out. Early on, the everyday life of the Indian middle class, the conflicts of women in their working and private lives, and images of political and social tension conveyed through the media had already become recurring artistic preoccupations.

Sheela Gowda was represented at the Kochi-Muziris Biennale in 2012, the Venice Biennale in 2009, documenta 12 and the Biennale de Lyon, both in 2007. Solo exhibitions were held in Birmingham, Hong Kong, Berlin, Dublin, Vassivière, Lund, Eindhoven, and in Oslo. Further solo exhibitions are scheduled for 2019 in Milan and Valencia. Selected participations in group exhibitions include those in Mönchengladbach, Beijing, Lyon, New Delhi, London, Bern, and Minneapolis. In 2014, she was a finalist of the Hugo Boss Award.

The exhibition at Lenbachhaus is organized in conjunction with Sheela Gowda’s receipt of the Maria Lassnig Prize 2019. The prize is awarded every two years by the Maria Lassnig Foundation to honor the achievements of mid-career artists.