The artist, known for her installations of cosmic proportions, tells us about her personal universe — from defying the laws of physics in her Berlin studio to the artists she keeps in her orbit

Where do you work?
I work in my studio in Berlin’s Oberschöneweide quarter, an area full of sprawling, industrial buildings. My studio has been constructed out of three large warehouses, giving me the room to collaborate, experiment freely, and install professional machinery. Oberschöneweide is across the Spree River, so it’s actually easiest to reach by ferry. A number of other artists, including Jorindo Voigt and Tomás Saraceno, have set up their studios in the neighbourhood.

What inspires you?
When I was a child, my father didn’t tell me the usual bedtime stories. Just as I was falling asleep, he would say things like: “imagine space as endless”. Today, as an artist, I am still fascinated by this idea. I take inspiration from the natural and social sciences, particularly in my questioning of space, time, reality, and perception. Reading philosophy also helps me spark new ideas and get to the core of these central concerns. 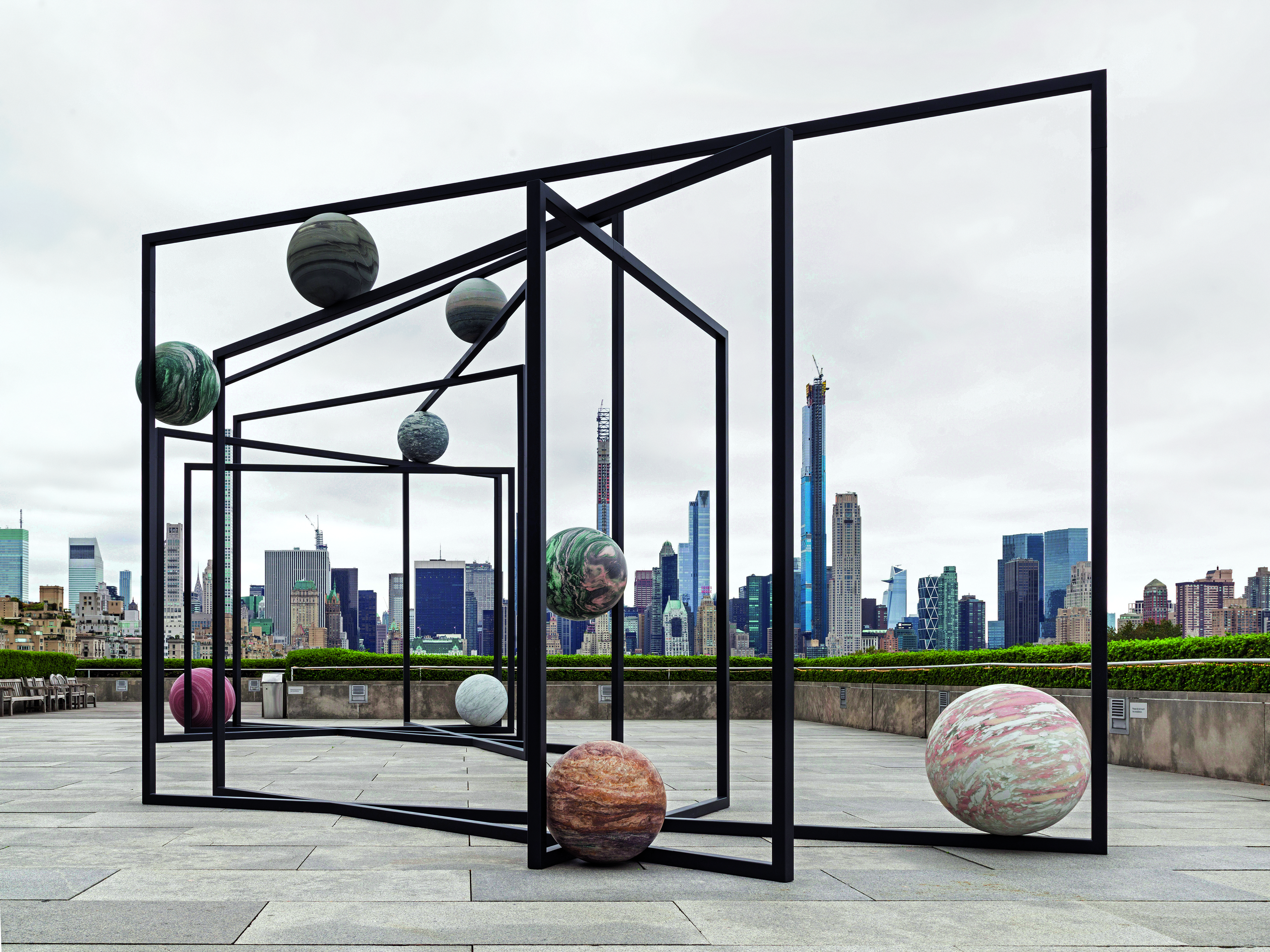 ParaPivot, 2019. Rooftop Garden Commission at The Met, New York. Courtesy of the artist

What was your most recent exhibition?
My last exhibition was titled ParaPivot. It was an installation commissioned for the rooftop of the Metropolitan Museum of Art in New York. The installation was a massive solar system made of steel and stone, a meditation on ideas of space and time. I chose different types of marble from places all around the world — including India, China, Italy, and Finland — to create spherical planets suspended in a metal structure. It was incredible to be able to create a piece that interacts with the New York skyline in such a stark way.

Which artists influence your practice?
I cannot name a single artist who has influenced me. Instead, I am drawn to specific artworks or aspects of those works. I admire artists like Robert Smithson, Charlotte Posenenske, Gordon Matta-Clark, Eva Hesse, Pierre Huyghe, Piero Manzoni, Marcel Broodthaers, and many others. Whose work I feel inspired by fluctuates from day to day, depending on my mood or outlook.

Where do you go to see art?
I almost never get a chance to see art in Berlin. I live a very structured life; I go to my studio early in the morning and come back late at night. So I barely have any time left to go to shows in the city. I always think I can go the next day, and before you know it, the show is over! This is why I mostly go to exhibitions while I’m travelling, whether it’s to London, Paris, or New York. Wherever I am, I always try to visit all the major shows in the city. In most places, I make a mental map of all the galleries and museums to make sure I see as much art as possible.

Born in 1979, Alicja Kwade is a German contemporary artist. Her mixed-media artworks, made of natural and man-made materials, manipulate the viewer’s perception of how we inhabit both space and time. She is represented by Galerie Isa and debuted in India for the first time at India Art Fair 2020.