Mira Felicia Malhotra, aka Kohla, gives us a new way of looking at Indian women — with humour, zest and a freedom of spirit. Watch the film to see the world through her technicolour eyes, and download a special artist poster made just for you

Designer and graphic artist, Mira Felicia Malhotra, aka Kohla, has the gift of colour. And in her bold feminist pop-art, women shine bright, together celebrating their unique identities with joy and confidence. Extraordinarily versatile and multitalented, Mira makes illustrations, animations, murals and zines — rejecting hierarchies of low and high art and embracing each medium for all it can do. In all of her work, be it on a billboard in South Bombay or a hidden wall in her neighbourhood in the North, the cover of a glossy magazine or on a table in a zine bazaar, she stands out in her powerful narration of stories of women who surround her.

“I’m primarily interested in showing Indian women in ways that are typically missing in mainstream media,” shares the artist, who wants to dig deeper into women’s ambitions, passions, passing thoughts and greatest desires, “I want to show more women as bodybuilders, as space explorers, as angry women or even evil women — women occupying spaces in ways we don’t usually accept. I think this comes to me from my own fantasies, a desire to be able to live life in many ways.”

“I want to show more women as bodybuilders, as space explorers, as angry women or even evil women — women occupying spaces in ways we don’t usually accept.”

Born in New Delhi and raised in Riyadh, Saudi Arabia till age 11, the artist remembers her early childhood obsessions that primed her sensibilities as an artist — from T.V. cartoons like Bugs Bunny and The Jetsons, the neon packaging of candies such as Nerds and Bubbleyum, the marshmallow stars and planets in the special editions of Count Chocula breakfast cereal, and the mind-melting aisles of the huge toy stores in the country. “This was my entertainment and this was my life,” she says, of a time that continues to influence her work to this day, with its celebration of all things cartoony, colourful and graphic.

Now a Bombay girl through and through, Mira takes a leisurely rickshaw to her studio that doubles as the Studio Kohl office –– a boutique design house that she founded in 2012. “I feel most in love with the city when I’m in a rickshaw, looking outside,” she says of the city she calls her haven and home. Once in the studio, the work begins with sketching on iPad Pro with Apple Pencil, while curled up on her comfy pallet sofa and with a large table next to it, usually crowded with coffee and snacks, while a single-large window brings in the most important element into the room: “the sunny mood!” 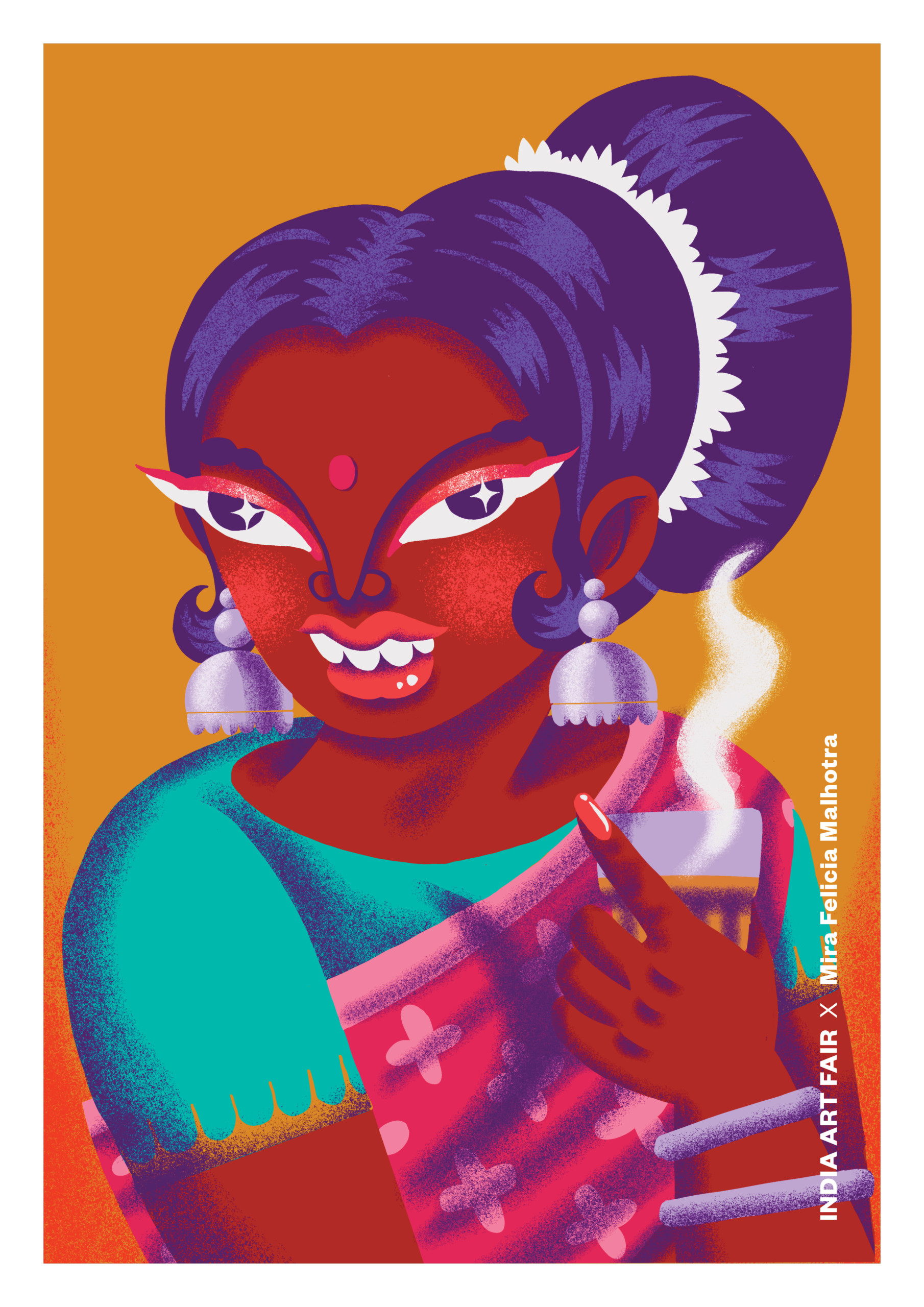 When asked why she makes digital art, Mira simply says, “I’m too in love with the undo button. It isn’t about being afraid of mistakes, but being able to make improvements as I go along and being able to create my best work. Working digitally allows me room to play around, without a loss of accuracy.” And whether it’s making notes and lists using Notes app or art, her iPad Pro follows her everywhere, including on vacation. “I am absolutely reliant on Procreate for the intuitive sketching, and new hover feature helps for an even faster workflow,” she shares about her go-to and most fundamental tool on her iPad Pro for creating digital artworks, “and I use Artivive to create animations and AR that bring the women in my illustrations to life… quite literally.” Most recently, Mira has been working towards the prototype for a resin collectible toy, called Sunny G, a “super chill character, based on Konkan and American surf cultures, who takes every day as it comes — basically the opposite of me!” Mira tells us, laughing.

“I’m too in love with the undo button. It isn’t about being afraid of mistakes, but being able to make improvements as I go along and being able to create my best work.”

For Mira, art is everywhere and without boundaries. For an artist looking beyond the traditional, creativity is not just in museums and galleries but most importantly among the young and ambitious artists sharing their work on Instagram and online art communities like DeviantArt. “I like offbeat, underground pop-culture with a strange sense of humour,” shares the artist who is deeply influenced by outsider art and feminism, “and I really love funny creepy stuff.” From the work of other digital artists such as the topsy-turvy creatures of Tim Biskup, the psychedelic monsters of Jesse Jacobs and the surreal animations of Felix Colgrave, to music videos and Adult Swim animated shows, inspiration is everywhere for the artist, and only waiting to be found.

These inspirations come together as Mira goes about collecting and imagining the complicated and strange stories of women’s lives in India, ordinary and mundane only on first glance. “A lot of what women do and experience is invisible, and yet so much happens there,” Malhotra reflects. “And it is those hidden stories that I like to visualise as fantasies, because I believe that women’s lives are busy, rich, fascinating and phenomenal, when they decide to live on their own terms. Ultimately, it has to do with my obsession with my own emancipation of sorts,” in a statement that encapsulates what is extraordinary to the artist. With just an iPad Pro and Apple Pencil, she creates and imagines a future world with weird, interesting and funny women at its centre, living with extreme freedom… or what they call ‘chutzpah.’

Mira Malhotra will show in the Digital Residency Hub at The Studio at India Art Fair 2023 as part of the Digital Artist in Residence programme. Her poster is inspired by the hugely popular ‘saas-bahu’ T.V. serials, and uses its exaggerated characters to comment on the repressed rage of Indian women.