Painting is the first thing that comes to mind when we think of art and for good reason. With as many styles as there have been painters, it is one of the most powerful forms of expression that has been a part of human culture since antiquity. Today, artists are wielding their brushes and palettes in new and wondrous ways, laying bare the shades and intricacies of their mind and capturing the extraordinary beauty of the world on canvas and paper. Here, we explore 10 pioneering artists who build on South Asia’s rich legacy of painting – and whose work helps us see not only their innermost truths but also ours. 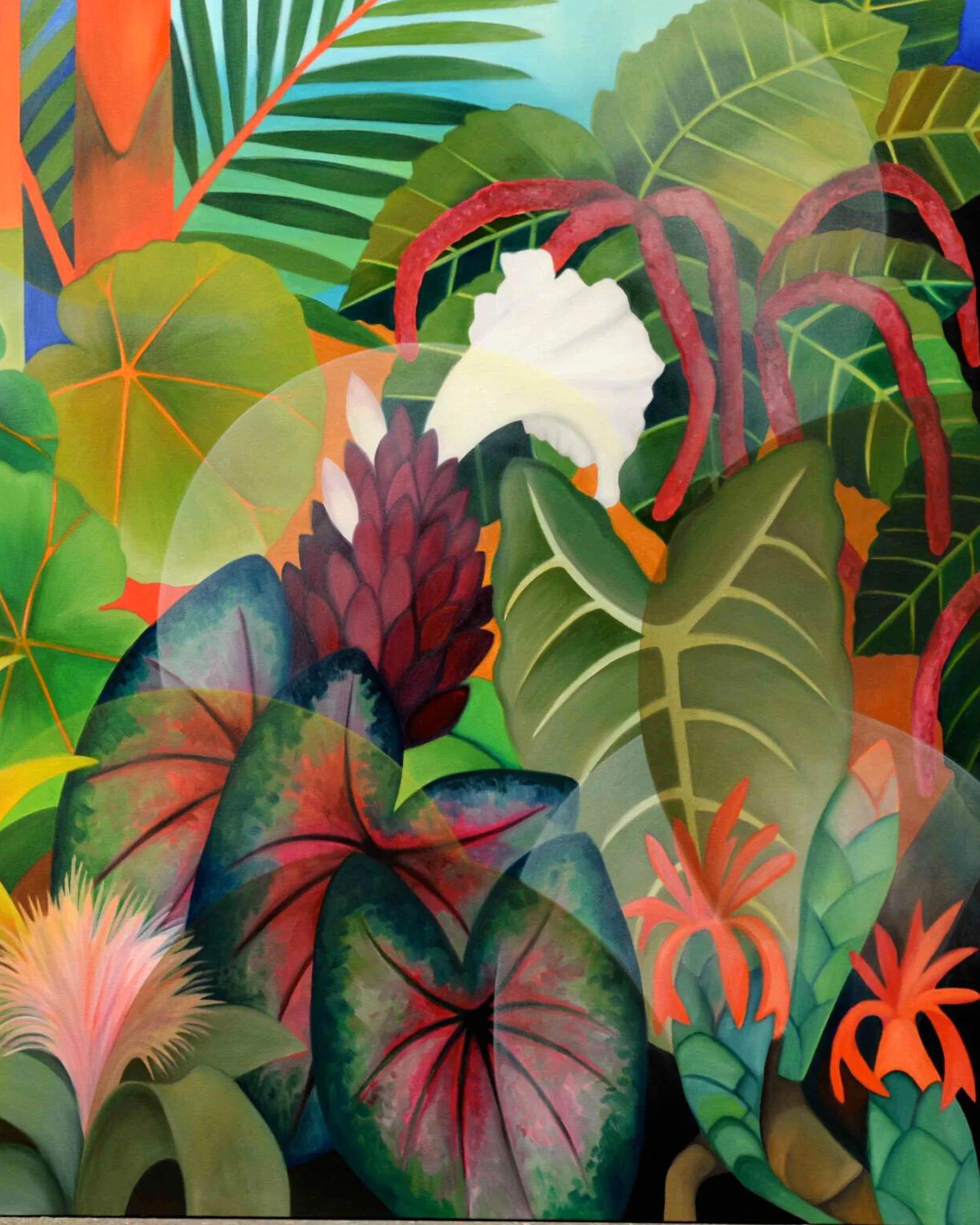 Senaka Senanayake is one of Sri Lanka’s most celebrated painters, known for his luminous paintings celebrating the abundance of the natural world. Born in a political family in Colombo that produced two of the country’s Prime Ministers, the artist was hailed as a child prodigy, producing 20-foot-long paintings at the young age of six and exhibiting internationally by the age of 10. After a degree in art and architecture at Yale University, Senanayake returned to Colombo, Sri Lanka and began working on his now iconic paintings of flora and fauna with colourful birds and majestic animals set within larger-than-life plantlife, meant to bring attention to the fragile beauty of the now threatened natural world in Sri Lanka. Inspired by the teachings of Buddhism and the Sathya Sai Baba, the artist prefers to show the bright potential he sees for the world in his work rather than dwelling in destruction, saying, “If I depict the negative parts of environmental destruction, who is going to be interested? But if I show the positive, I will get my message across.” 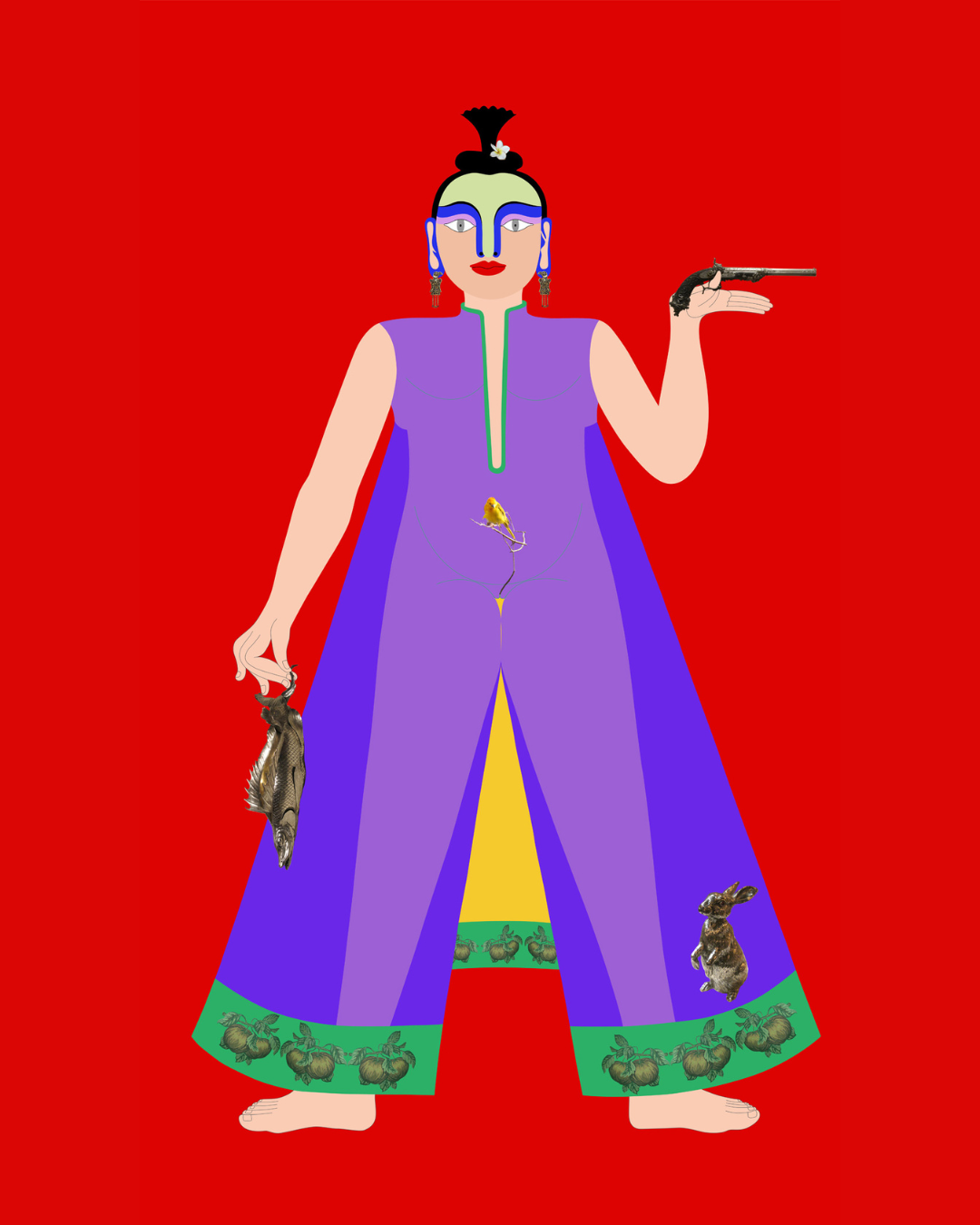 “Feminism and gender politics are part of my DNA,” says Baroda-based artist Rekha Rodwittiya whose vibrant figurative paintings give voice to the alienation and discrimation of women while celebrating the power and resilience of femininity. With the female figure at the centre, Rodwittiya constructs her works with vivid blocks of colour and natural and spiritually-laden symbols that act as metaphors for the personal stories of other women, the histories of collective feminist resistance and the folk legends and myths that inspire her.

Her Painted Room, initially installed at the United Nations in Geneva for the organisation’s 50th anniversary in 1995 remains one of the artist’s most monumental works, an installation of twelve large canvases that depict women simply going about their everyday lives and chores, albeit in magnificent colour and scale. Besides being a painter, Rodwittiya is also a curator, writer, teacher and founder of The Collective Studio, an alternative learning space for young artists in Baroda. 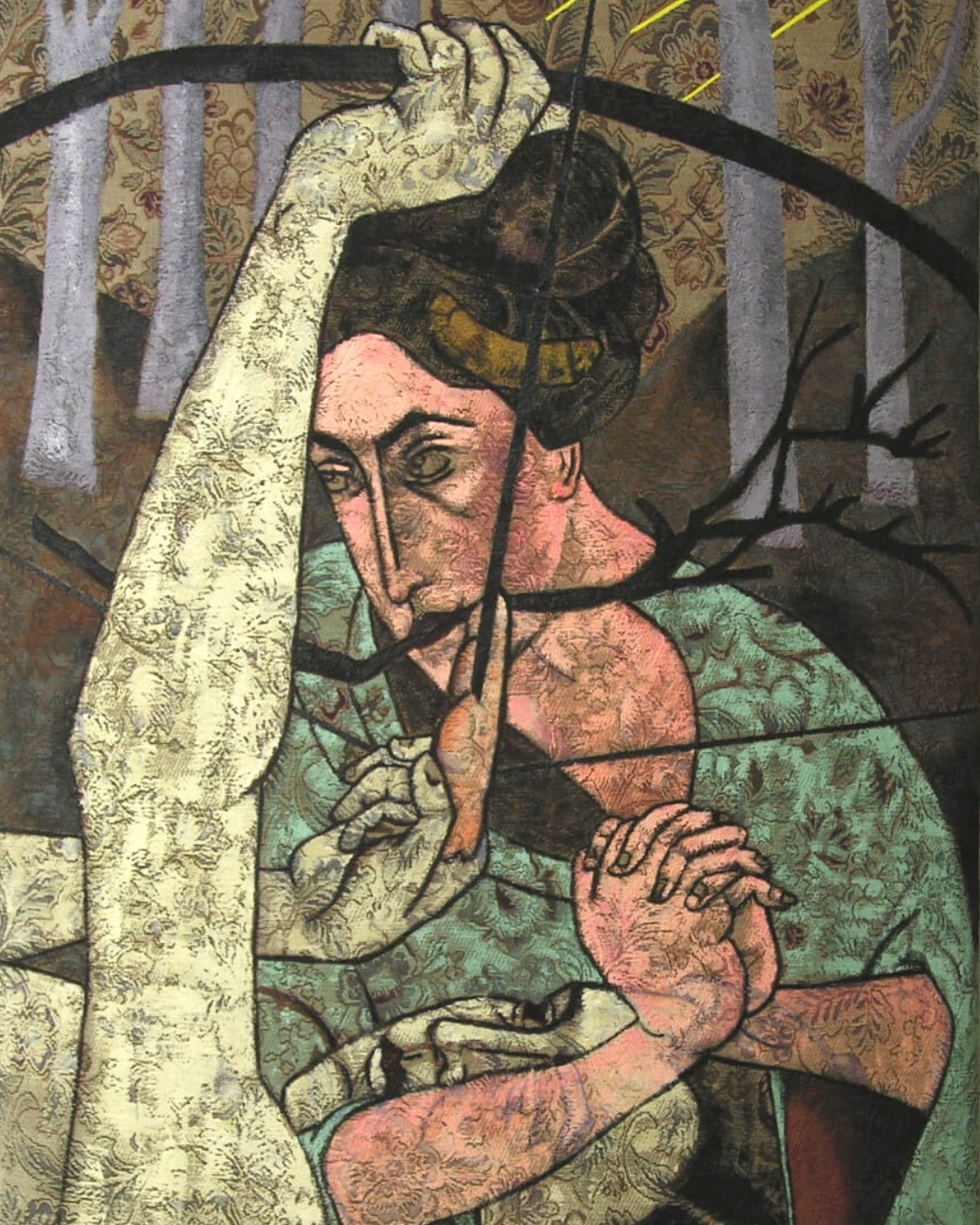 Mumbai-based artist Anju Dodiya is known for her “fictive self-portraits” that explore the shadowy side of creative life, giving form to feelings of anxiety, insomnia and a restless inner mind that ultimately give rise to her works. Drawing from a range of art-historical and pop-cultural sources including Indian miniature, Italian Renaissance painting, Japanese ukiyo-e prints, European cinema and social media, Dodiya often breaks her compositions into collage-like elements with figures framed in dark charcoal and overflowing with stain-like washes of paint. Each surreal composition reveals a new side to the artist’s “many mes”, constructed through her observation of the outside world and especially the lives of other women. With her roots in watercolour on paper, Dodiya has expanded to a variety of mediums, most significantly bed mattresses, a natural choice for the artist who is most preoccupied with all that occurs when we are “alone and lying down.” 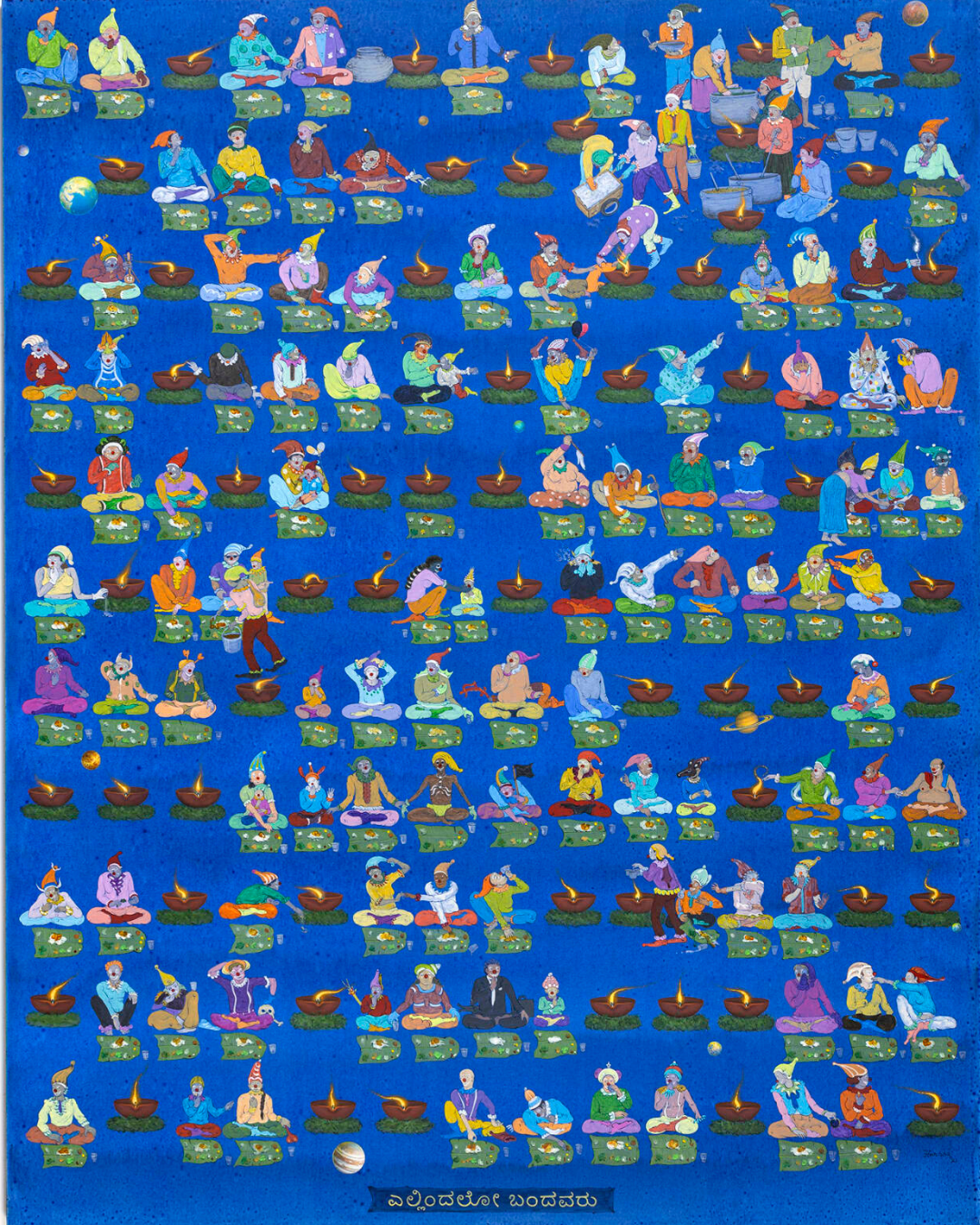 Born in Mysore, Karnataka, N.S. Harsha is one of the few painters working today who can make viewers laugh out loud. In his paintings, he comments on and satirises social and political conventions, exposing the absurdity of what most accept as the norm, be it through his favourite animal allegories of rats, cows and monkeys or surprising juxtapositions of characters, painting a queen and a farmer or a sage and a clown in the same setting, for example. In doing so, he employs visual codes from the popular culture of everyday small-town India, using forms like that of a school-room chart or a street poster to create works that emerge directly from the cultural world that he represents in his work. The artist draws widely from the world beyond Mysore too, borrowing techniques and imagery from styles like Italian Arte Povera and Japanese Manga, and describes himself as a cook balancing ingredients and flavours, saying, “I love to make a dish, offer it to the people, and then anxiously wait for a reaction.” 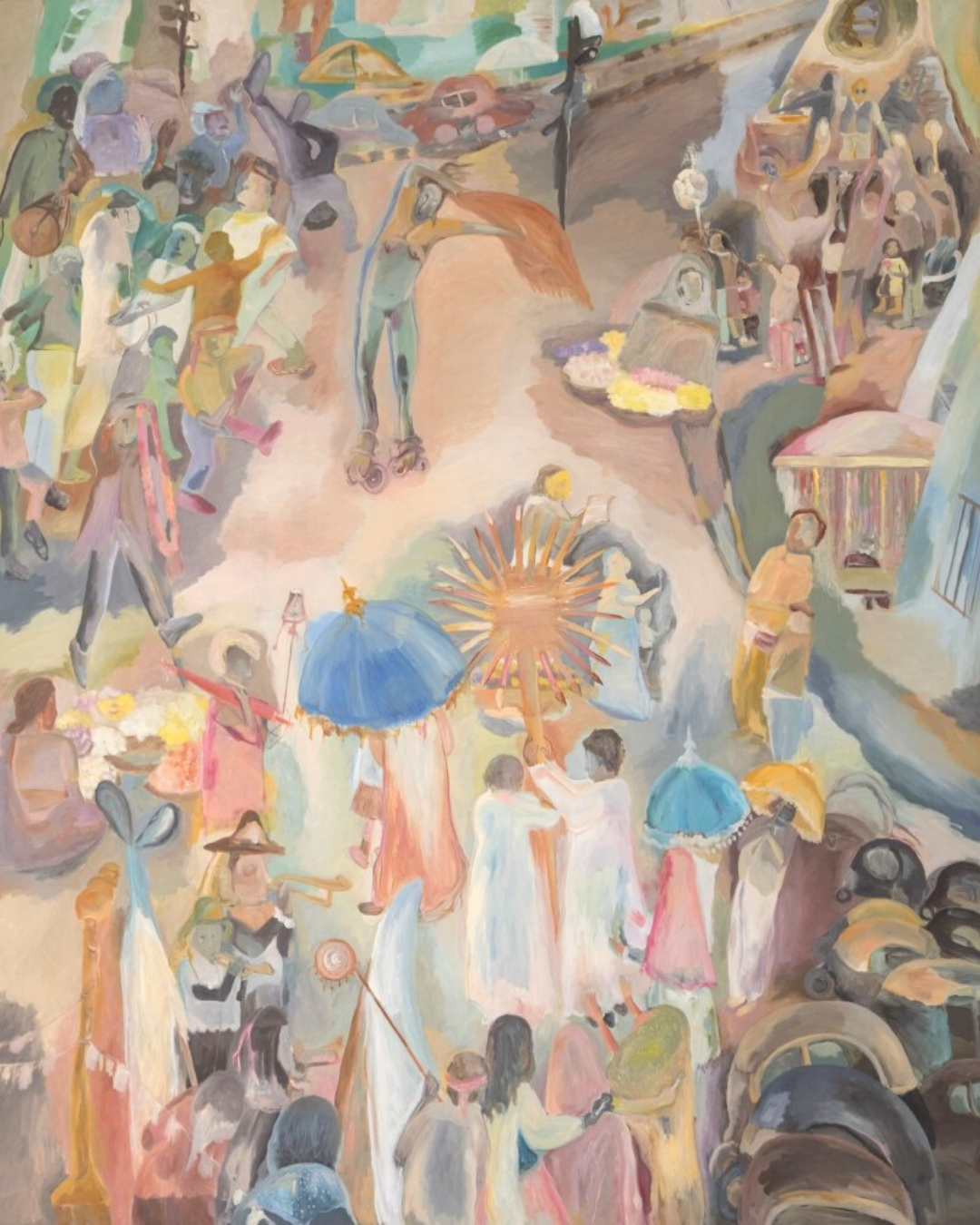 Sosa Joseph. Where are we going, 2015. Oil on canvas. Courtesy of Galerie Mirchandani+Steinruecke.

Based in Kochi, Kerala, Sosa Joseph works at the boundaries of figurative and abstract painting, drawing on social realities and her rich imagination to “dream up” surreal and colourful canvases. Led by instinct and intuition, Joseph’s paintings transport everyday scenes to otherworldly places through a characteristic loose brushwork, playful compositions and an always surprising balance of colours — like the contrasting midnight purples with rich yellow in her 2019 The Ferryman and His Jaundiced Child or brick reds with turquoise blues and greens in her rendition of the iconic Pieta. Throughout her career, Joseph has been interested in painting memories from her childhood and investigating her origins, most prominent in her much loved 2020-21 series Where Do We Come From?, in which she pays homage to the river Pamba, the lifeline flowing through her hometown of Parumala in the South of Kerala. Resisting the demand to explain the content of her work, Joseph instead asks us to look freely and closely at her work, saying “what is more important to me than what I paint is how I paint it. I hardly ever set out to paint … to ‘say something’ or ‘make a point’.” 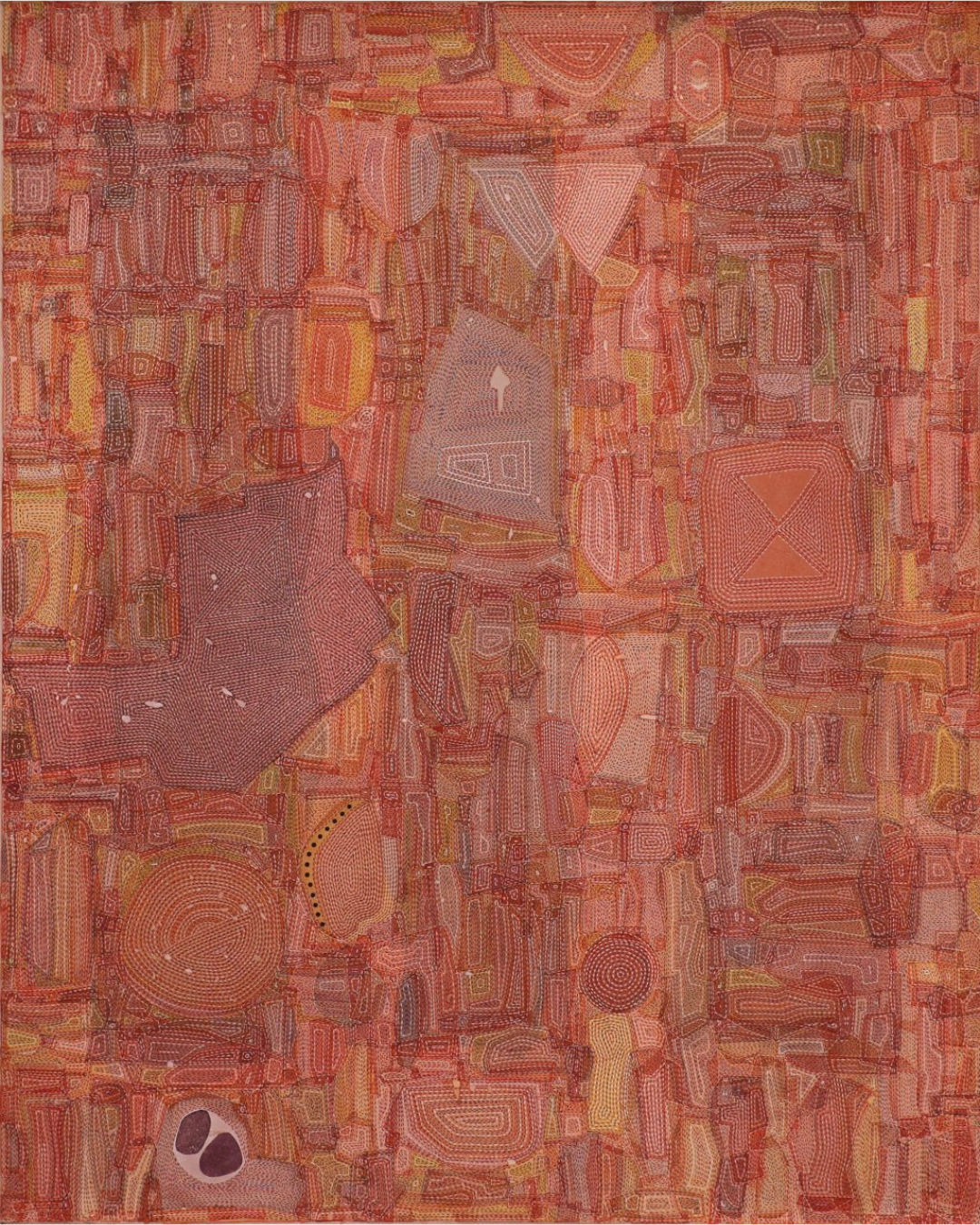 A geologist by training, Manish Pushkale began his art journey at Bharat Bhavan, the renowned art complex and museum in his hometown of Bhopal, Madhya Pradesh, where he was deeply inspired by the extensive collections of Indian tribal and folk art and modernist artists like S.H. Raza and J Swaminathan. These foundational passions—the organic forms and colours found in nature, traditional Indian artforms, particularly folk textile art and modernist abstraction—shine through in all of the artist’s works. Best known of these are his embroidered canvases that use the traditional Indian kantha or running stitch on a base of monochromatic paint to create abstract patchwork effects that recall landscapes that are both natural and spiritual. As his mentor, Raza says, “He sees in a way that even the camera doesn’t. This is imagination, the vision of the soul.” 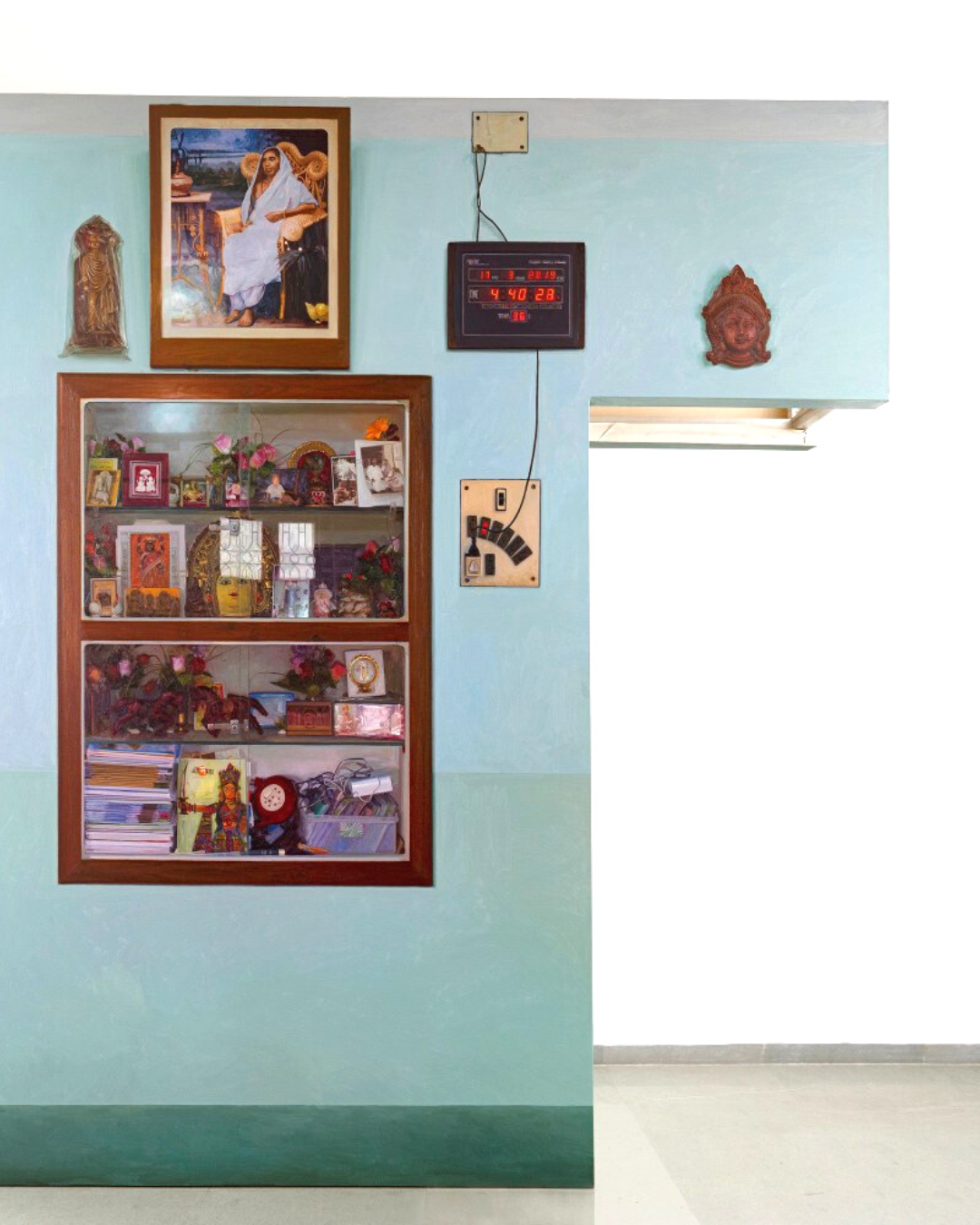 Baroda-based artist Abir Karmakar creates photo-realistic and life-sized paintings of domestic and street environments that are almost impossible to distinguish from the real world. Born into a family of Bangladeshi migrants in Siliguri, West Bengal, Karmakar began his journey in art by drawing by copying Marvel comics at home, and established himself as an artist with a much acclaimed series of arresting nude self-portraits created in the late 2010s. By contrast, Karmakar’s recent works are almost always devoid of figures, and instead signal human presence through material belongings, be it a baby picture inside a glass cabinet in a painting of a living room or a suitcase stuffed on top of a wardrobe in a depiction of a bedroom, evoking personhood through memory and imagination. Karmakar’s works become more surreal the more time one spends looking at them, not only because of their hyper-realism but also because of the expressionist brushwork that reveals itself on closer inspection of the canvases. 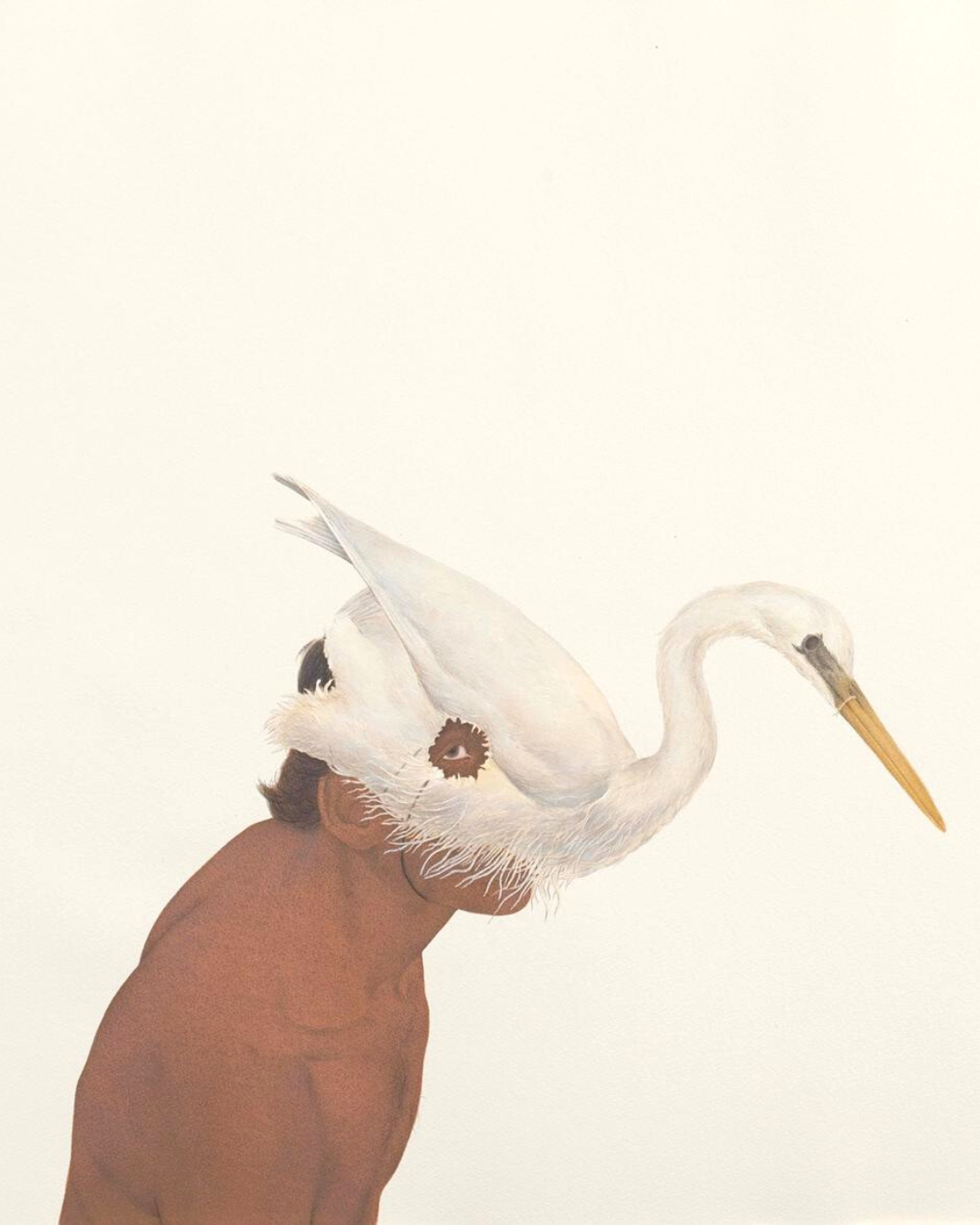 Ali Kazim began his career painting circus and cinema billboards in his hometown of Pattoki, near Lahore. More than two decades since, he has become one of Pakistan’s most beloved artists, known for his timeless portraits of solitary figures and landscape drawings, described by the artist as “collective portraits of the people who lived there”. An artist profoundly influenced by history and inspired by its remnants like Harappan and Gandhara sculpture, Kazim pays homage to the past not only in subject matter, such as the in his Ruins series depicting fictionalised archeological sites strewn with ceramic shards, but also in his style, borrowing techniques of watercolour painting from traditions of Mughal miniature, Company School painting and the Bengal School of art. As in each of these traditions, Kazim’s figures stand out in stark relief from their backgrounds, often with large negative spaces, and are rendered in meticulous detail and richly pigmented layers, albeit with a sense of reserve special to Kazim’s subjects. 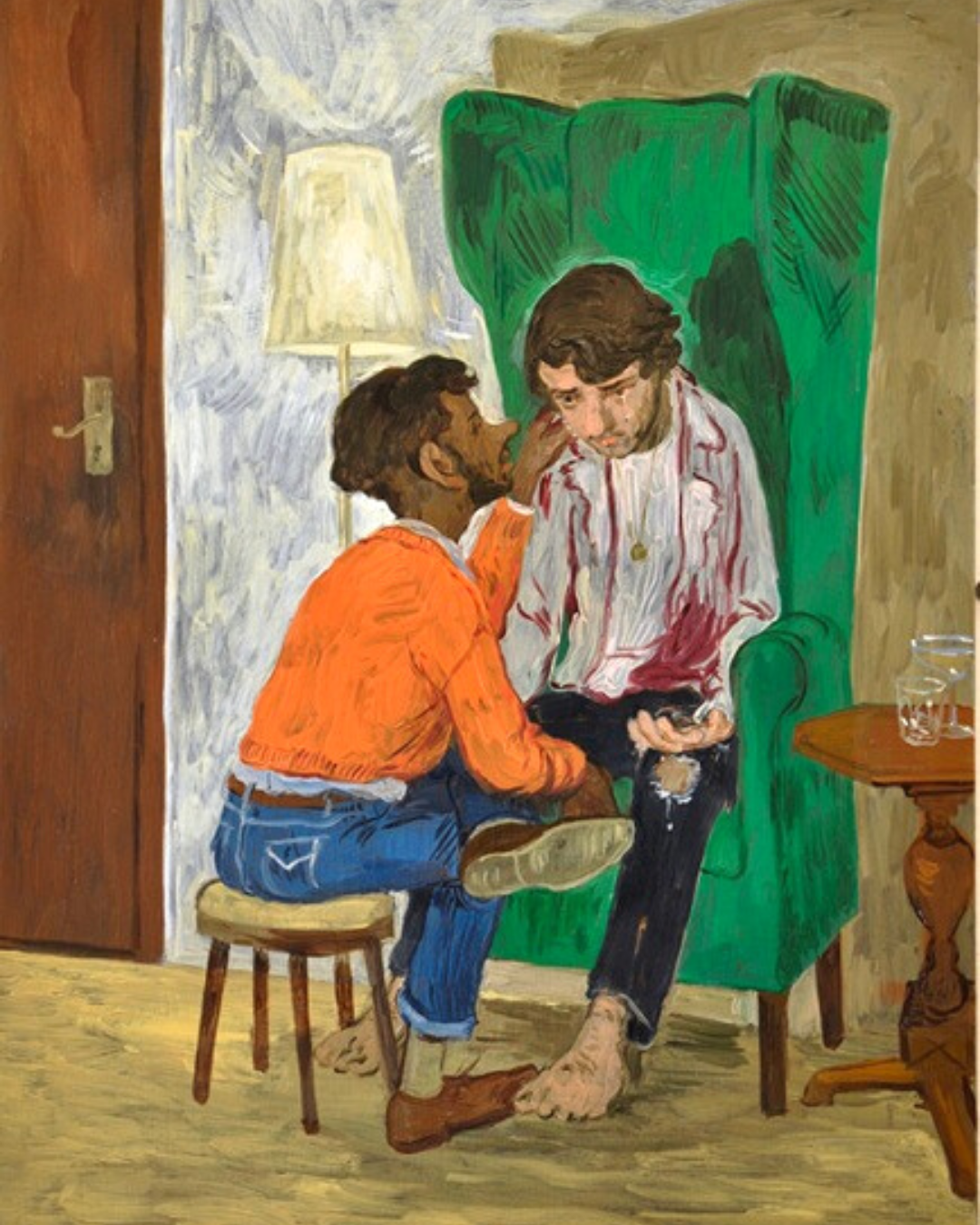 “Painting is a way to create spaces I would like to live in, says artist Salman Toor, for whom his paintings are “fantasies.” Born in Lahore, Pakistan and based in New York, Salman Toor conjures intimate social settings and domestic environments in a characteristic sketchy and loose style, inspired equally by Mughal portraiture and 17th century Dutch paintings. For the artist, the paintings are imagined places of refuge for fictional brown and queer people from the public eye and its invasions on queer diasporic life. Toor’s works are memorials to the ephemeral and moments that may otherwise go unremembered, be it a momentary glance or whisper shared between two men or an unattended glass of wine on a lonely figure at the back of a party, that together recreate the richness of lived experience on the canvas. Of special note are Toor’s paintings created almost exclusively in shades of green, which Toor describes as simultaneously glamorous, poisonous and intoxicating. 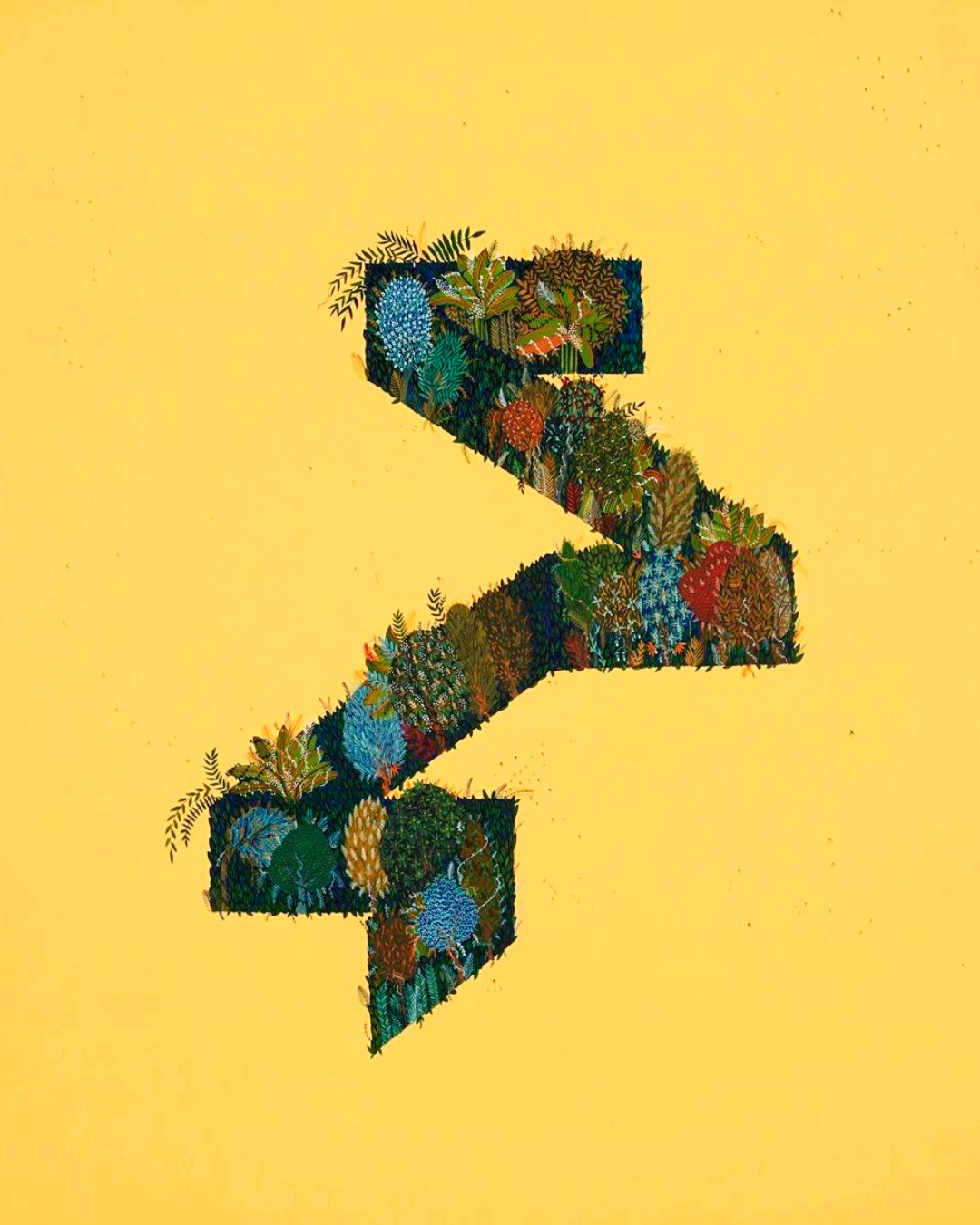 Lahore born and based Wardha Shabbir is one of the foremost miniature artists working today. Inspired by the history of miniature painting and Islamic philosophy, Shabbir’s paintings often feature geometric “paths” bursting with exquisitely detailed foliage set within vibrant yellow and orange backgrounds, mimicking, as the artist puts it, the “light of Lahore”. This language of miniature painting, one she first started developing at the National College of Arts in Lahore, has become a way of representing her lived experience for the artist while exploring the spiritual dimensions of painting. Her works, in which “each tree represents a person,” tell the stories of her city and significantly the women in her life, not least of all her mother, in whose garden Shabbir first came to find a love for art and nature. At the same time, painting is a deeply personal trance-like experience for the artist. As she says, “When I go into the very details of my work, I really have to lose myself somewhere…There’s no Wardha at that point in time.”