The gateway to South India, Chennai is a cultural melting pot. Enjoy the architectural beauty of its ancient temples and colonial architecture and visit some of its most buzzing contemporary art galleries on this magical tour

The appeal of Madras, or Chennai as it is now known, has been timeless. Once under the Chola and Pallava dynasties, the city took its current form as the capital of the Madras Presidency under the British Raj, and is now a thriving cosmopolitan city with art and architecture from across the ages. There is something special wherever you look—from ancient temples, Raj-era buildings and beautiful beaches along the city’s coastline to the jewel-like Tanjore paintings of Tamil Nadu and the city’s thriving art scene that can be seen across its museum and gallery spaces. Come away with us on this art-lover’s tour as we explore Chennai’s most beloved cultural hubs.

Explore Art and Culture in the Heart of Chennai 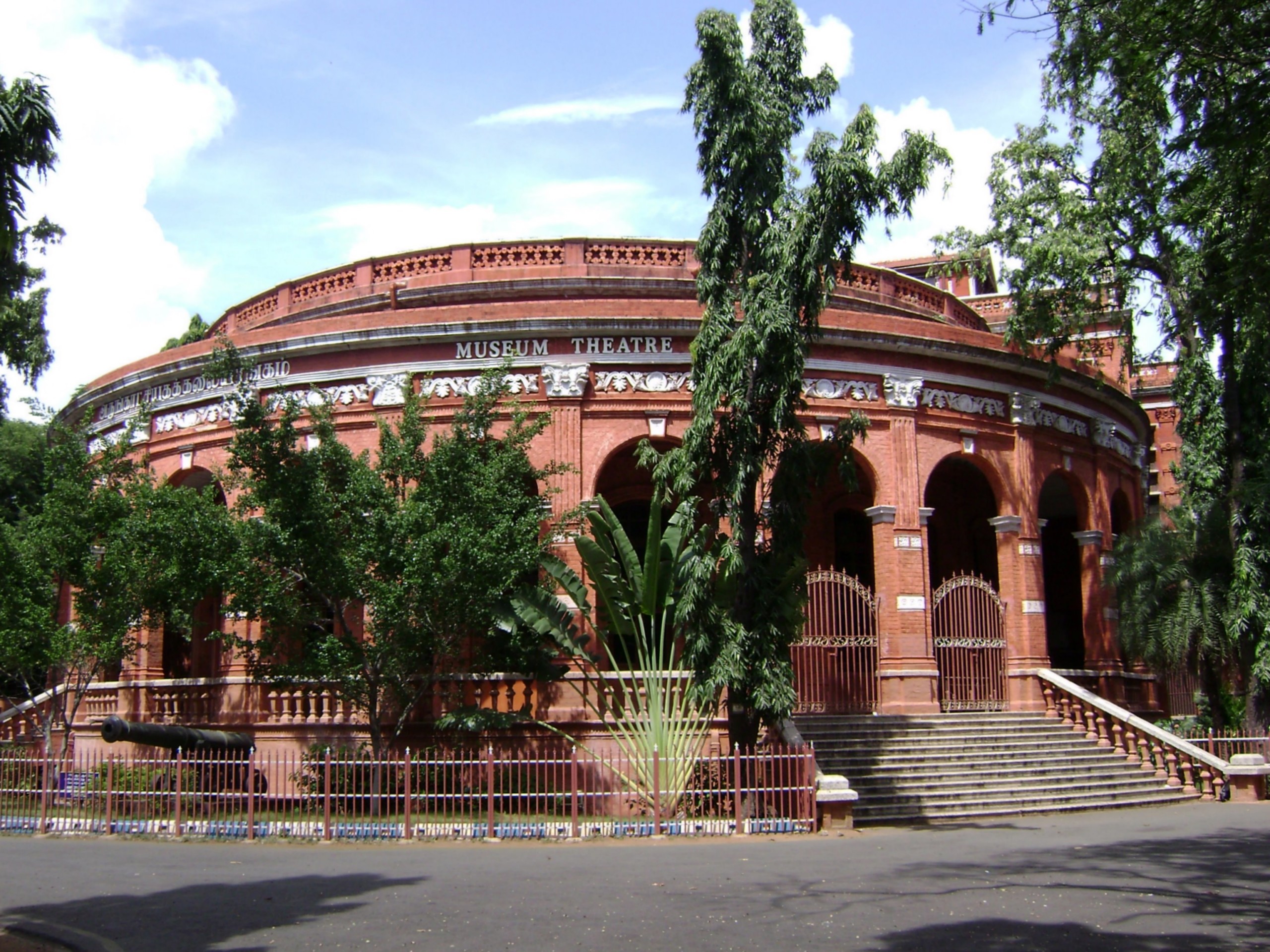 Start your visit at the Government Museum Complex, set in Egmore, the heart of the city. With magnificent buildings from the British Raj in the typical style of the time, melding Western neoclassical architecture with Mughal decorative elements, the complex feels like entering a time capsule. The highlight here is the Government Museum, the second oldest museum in India, which houses the most exquisite Chola Bronzes in the world, dating back to 800 AD, and the largest collection of Roman antiquities outside Europe. For lovers of painting, the National Art Gallery in the Museum Complex holds some of the most magnificent traditional Tanjore paintings, depicting scenes from mythology and Tamil literature, and rare masterpieces by the iconic Indian painter Raja Ravi Varma (1848-1906) including gems like Sankuntala and Yasodha and Krishna.

Right next door is the Connemara Library, a sight to behold with its majestic domed halls and reading rooms decorated with an elaborate woodwork ceiling and stained glass panels. Browse through the Library’s collection of more than a hundred thousand rare and antique books including a Bible published in 1608 AD, and a special collection of fine art books bequeathed to the library by philanthropist Rao Bahadur Dhanakoti.

Some special side tips for film and photography lovers: make a trip to the Koogai Library, founded by Tamil filmmaker P.A. Ranjith in the interior of the city. The library houses more than 6000 crowd-sourced books on topics ranging from cinema and art to political philosophy and anti-caste activism in various languages and is a thriving hub for the city’s students and budding filmmakers. Another hidden treasure in the city to add to the list is the Chennai Photo Biennale’s Reading Room in Adyar in central Chennai, open all year round and with a large collection of mouth-watering photobooks, zines and books on photography and visual culture.

Take a trip to historic Madras at Fort St. George 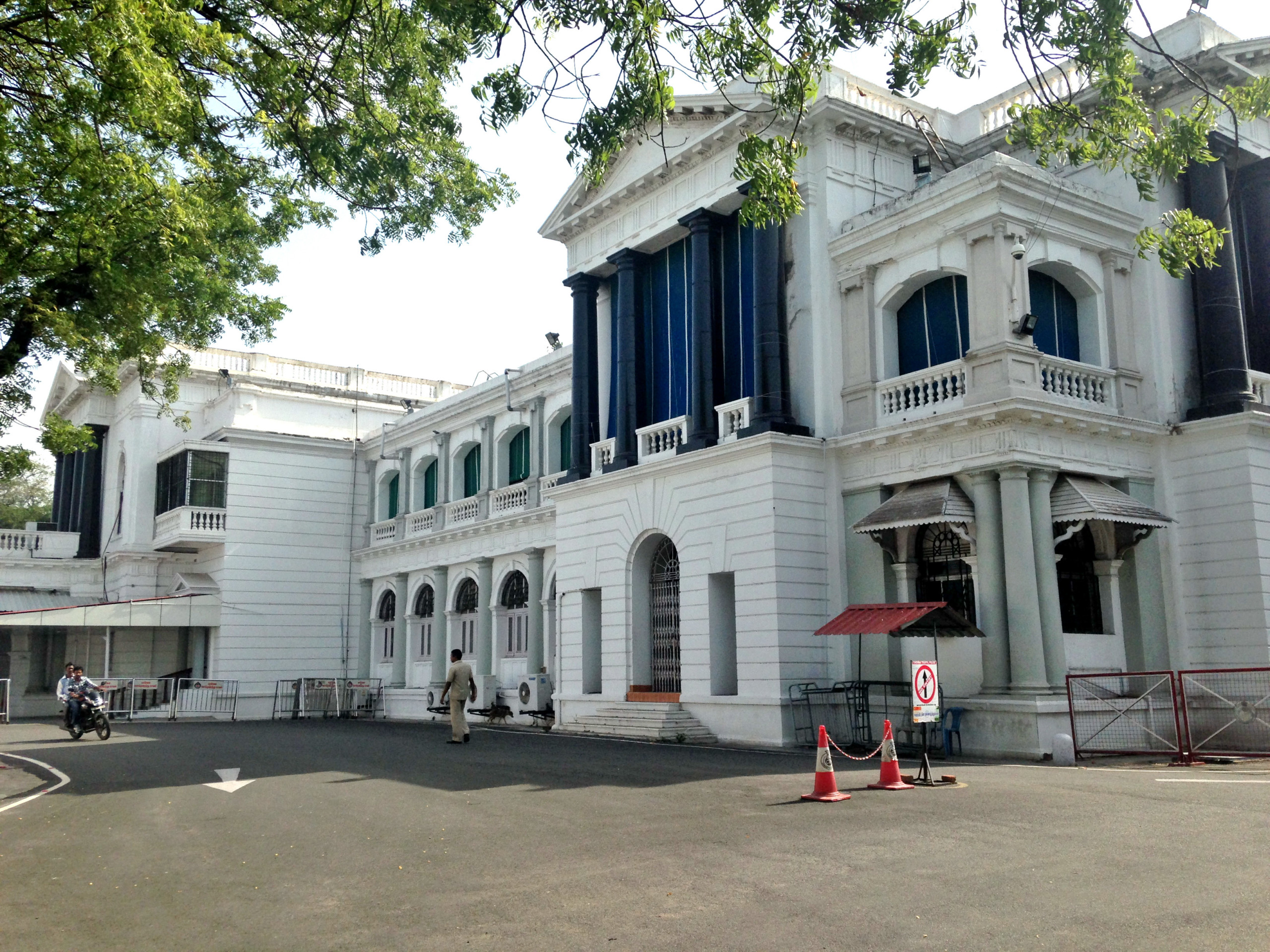 Once an important landmark of the colonial empire, Fort St. George currently functions as the legislative headquarters of Tamil Nadu

Immerse yourself in Chennai’s history with a trip to Fort St. George—one of the bastions of the British Raj—located right next to the port. Founded in 1639 and the first British fortress in India, Fort St. George was a major trade and military centre in British India and continues to be the legislative headquarters for the state of Tamil Nadu.

History buffs should plan to spend some time at the Fort St. George Museum in the complex, full of colonial artefacts, prints and manuscripts, as well as the first-ever Indian flag to be flown after Independence, designed by Telugu freedom fighter, Pingali Venkayya. While in the complex, make sure to see the oldest Anglican church in Asia, St. Mary’s Church, for its intricately carved Burma teak pillars and the stunning Raphaelite painting of The Last Supper in the altarpiece.

Not far from the Fort and within the historic University of Madras campus, stands the Senate House, designed in 1879 by Robert Chisholm, a pioneer of the typical British-era architectural style, otherwise called ‘Indo-Saracenic’. Serving various functions throughout its history, including as a legislative hall and a venue for the Madras Music Academy, the Senate House now houses a convocation hall and library for the University, and has held important exhibitions in the city such as the Chennai Photo Biennale. Round out your day with a stroll in the University grounds and perhaps, a hot filter coffee from the cafeteria. 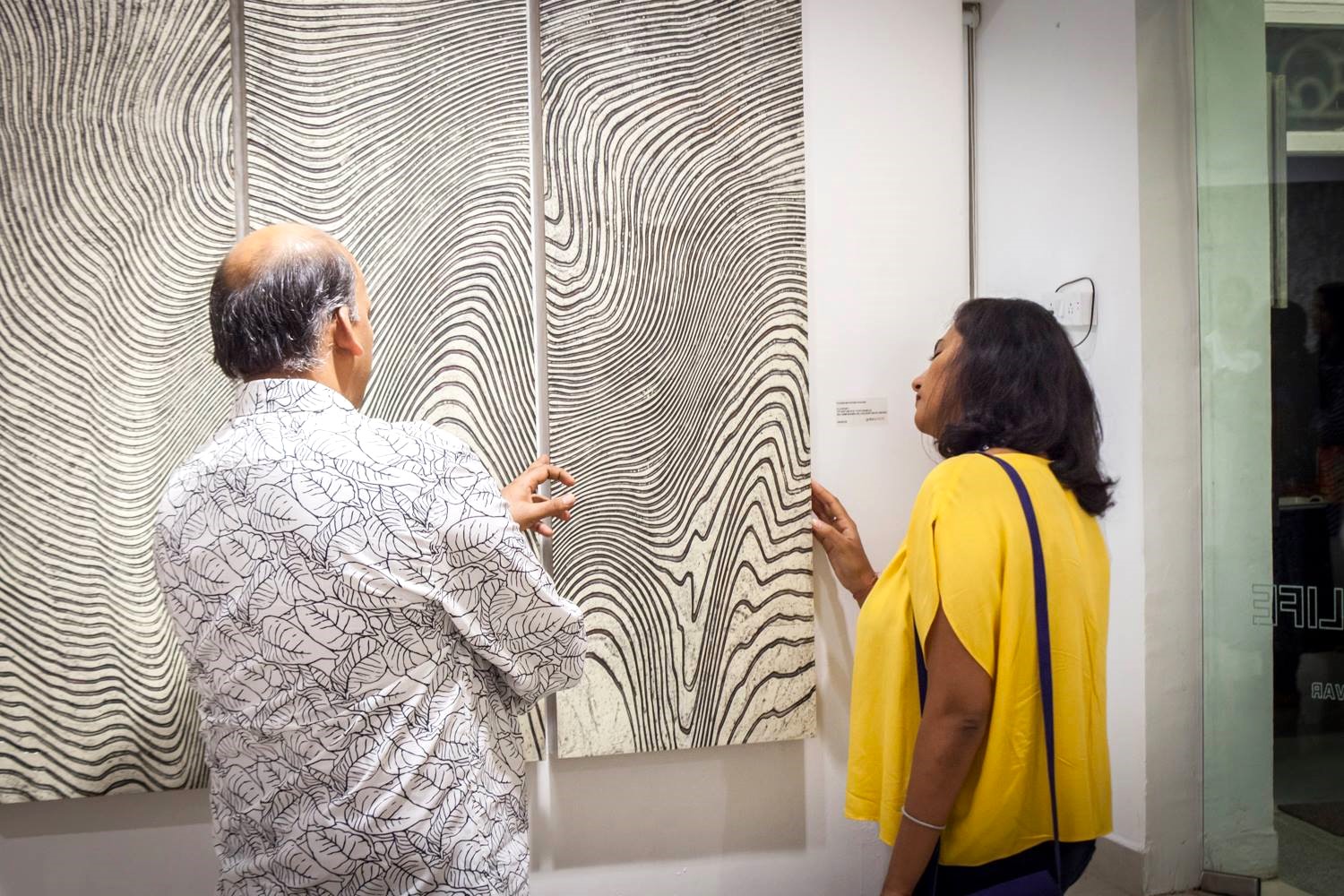 Yuvan Bothysathuvar’s canvases on display at Gallery Veda, one of the best places in the city to see contemporary Indian art

Chennai is home to one of India’s fastest growing contemporary art scenes, with many galleries catering to a variety of tastes. Make a stop at one the oldest galleries in Chennai, Apparao Galleries set up in 1984 in Nungambakkam in the centre of the city and admire its showcase of artists furthering the boundaries of contemporary art such as Tito Stanley, Sujil S. and George K. Not far in Ramkrishna Nagar is Sarla’s Artworld, the oldest gallery in town that has something for everyone, be it portraits by Ganesh Pyne or mixed media and sculpture from younger contemporary artists. At Gallery Veda in nearby Srirampuram, find a mix of modernist and contemporary artists, with many works that may be of interest to young collectors.

A relatively new space is Ashvita’s, which runs programmes across two spaces in the city focused on encouraging young collectors. Other spaces that contribute to the city’s contemporary art scene include Art Houz, Forum Art Gallery, and the bustling INKO Centre that is a great place in Chennai to explore Korean culture.

Just about 9 kilometres to the South of Chennai is its most impressive and historic art centre: the Cholamandal Artists’ Village, the centre of the Madras Art Movement. Founded by the modernist painter K.C.S. Paniker in 1966 as an idyllic commune for artists and creatives of all kinds, it boasts being the homeground of some of Southern India’s foremost artists including painters, K. Ramanujam and A. Selvaraj, and sculptor, Anila Jacob. The Village continues to run as a residency for working artists besides housing some of the most impressive galleries and sculpture gardens in India with a large collection of modern and contemporary artworks.

Further down the coast and overlooking the Bay of Bengal in Besant Nagar, Dakshinachitra is a ‘living museum’ dedicated to showcasing the heritage and culture of South India, with several houses modelled after traditional homes from various parts of the region, the museum focuses on folks and textile art from across Tamil Nadu, Kerala, Andhra Pradesh and Karnataka, besides its regular rotation of contemporary art exhibitions.

If you are lucky, your visit to Chennai will coincide with the dates of the Chennai Photo Biennale, one of India’s most exciting contemporary art events which has breathed new life and energy to photography and lens-based practices in the country, with exhibitions and programmes running across venues including the Goethe-Institut in the Thousand Lights area and the Madras Literary Society next to the Cooum River, both in the busy centre of Chennai. 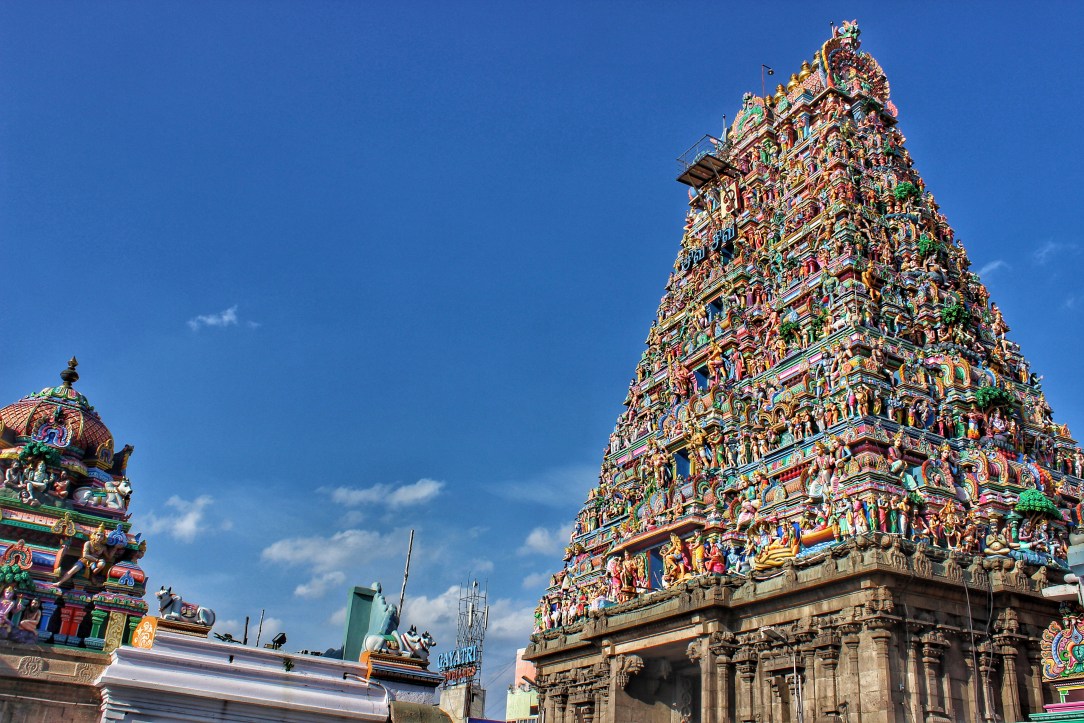 One of the oldest temples in Chennai, Kapaleeshwar Temple is an architectural marvel that dates back to the 7th century

Chennai is full of magnificent temples built throughout its history and dating back more than a millenium. One of the oldest among these is the 7th-century Kapaleeshwarar Temple, dedicated to Lord Shiva and one of the finest examples of Dravidian architecture. A 120feet-high pyramidal gate or gopura leads you into the ancient temple, flanked on the other side by a water tank with an intricate mandapam or covered structure at its centre. Drop in during the morning or evening pooja timings to experience the centuries-old and elaborate ritual worship ceremony at the temple.

A marvel of architecture built entirely in granite without any iron or wood, the Wallajah Mosque, otherwise known simply as Big Mosque, is not far from the Kapaleeshwarar Temple in Triplicane. One of the oldest mosques of Chennai, it was built in 1795 by the Nawab of Arcot and remains the city’s principal mosque with a large prayer hall that can accommodate thousands of devotees and is a sight to behold especially during the holy month of Ramzan.

Further North, in Parry’s Corner, make a visit to the Armenian Church, built by the Armenian community in Chennai settled in the city since the 1500s. Originally built entirely in timber in 1712, the building has since been refurbished but still contains many original features including its large metal bells that ring every morning to this day. Further South is the San Thome Church or St. Thomas Cathedral Basilica, a catholic church that dates back to 1523 and originally built by the Portuguese. Stepping in through the majestic outer facade reveals rows of wooden pews and beautiful stained glass windows that depict the life of St. Thomas and the other apostles of Christ. Oh, and don’t forget to end your visit to Chennai on the Marina Beach, India’s longest beach, with a view of the sunset and a freshly opened tender coconut!