South Asia has been a hotspot for sculpture since antiquity. Meet 10 of its essential modern and contemporary practitioners here

From exquisite reliefs adorning stupas and temples to the intricate geometry of mosques, South Asia enjoys an extraordinarily rich history of sculpture. Pioneering modernists and contemporary artists have continued and expanded this legacy, often experimenting with unexpected materials and techniques. Many artists have also linked their sculptural practice with other fields such as architecture, engineering and music, developing unique ways of making meaning through three-dimensional forms. Read on to discover 10 such path-breaking sculptors from South Asia. 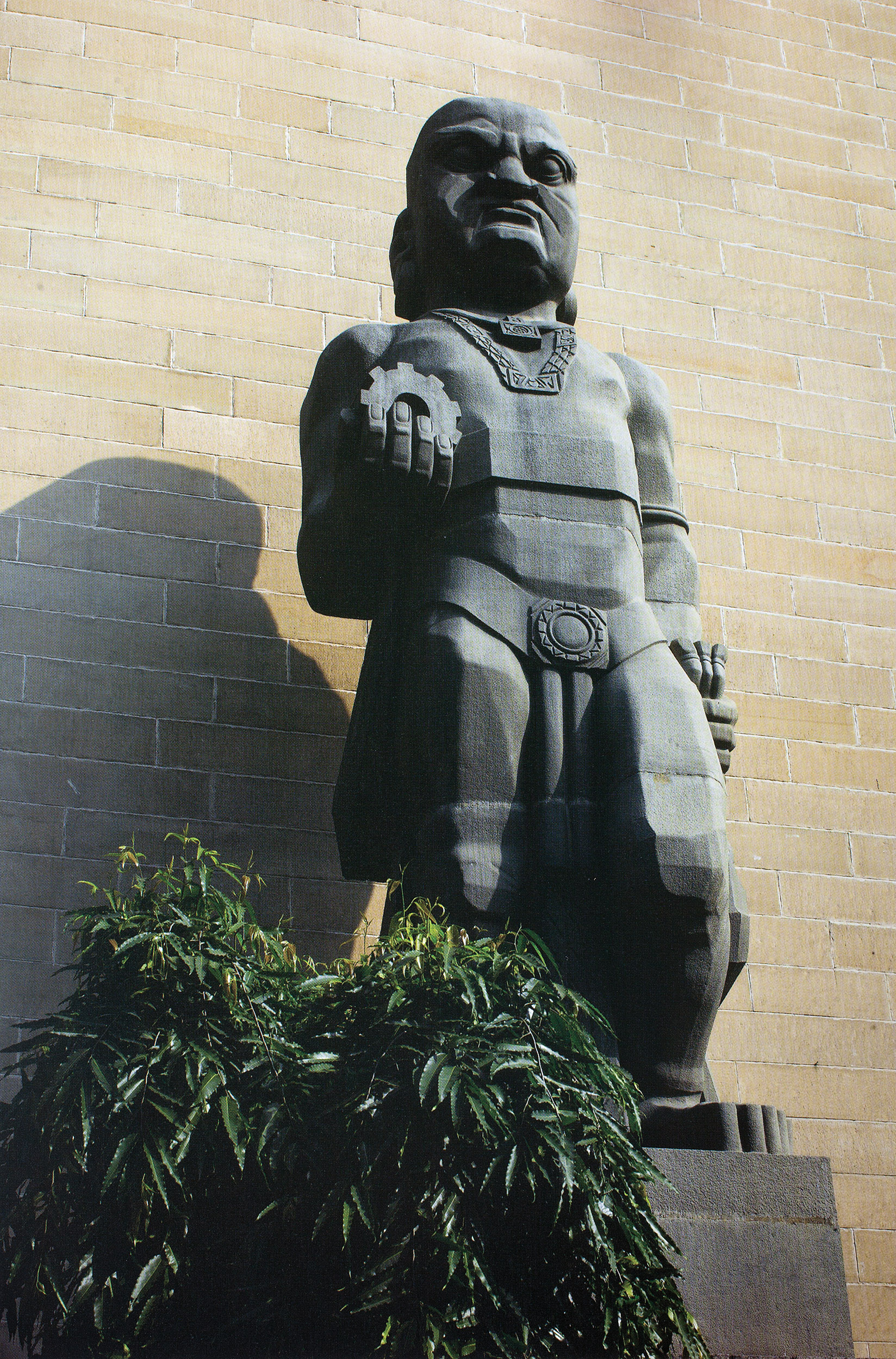 Ramkinkar Baij was one of India’s leading modernists, who made course-changing contributions to Indian art through his focus on the ‘everyday’ Indian and a new sculptural aesthetic that melded the modern western and pre-classical Indian principles. Born in rural Bankura, West Bengal to a barber’s family, Baij moved to the experimental art school, Kala Bhavan in Shantiniketan at the age of 19, where he developed his unique style of al fresco or outdoor public sculpture. To this day, Baij’s mark on Indian art and culture can be experienced at Shantiniketan, dotted with his rough cement, concrete, laterite and mortar works, created first as a student and then as faculty at the school. Most significant of these are perhaps his sculptures depicting tribal communities of Santhals and rural workers of the region, such as Santhal Family (1938) and Call of the Mill (1956), immortalising the labouring classes of the country, a constant subject of his work. Baij’s work can also be seen elsewhere, including his monumental Yaksha and Yakshi figures flanking the entrance to the Reserve Bank of India in New Delhi. 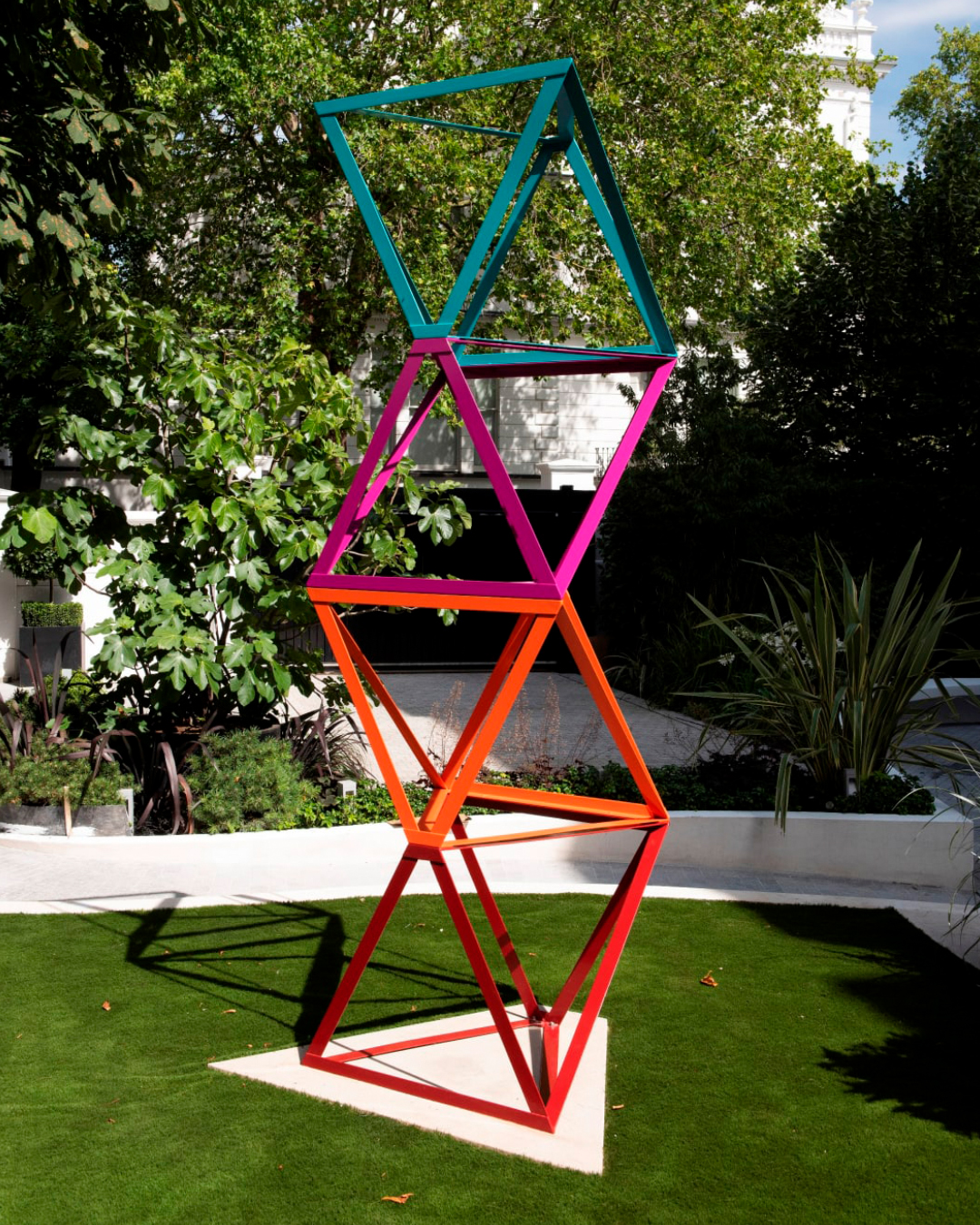 Rasheed Araeen is a pioneering modernist born and educated in Karachi, Pakistan and based in London since 1964. Araeen played a key role not only in the expansion of minimal abstraction as an aesthetic movement but also in developing early critiques of the orientalism of the British art world. With a background in engineering and inspired by the English sculptor, Anthony Caro, Araeen found his visual language in the fundamental structural units of cubes and discs, put together in colourful lattices that spoke to his personal, psychological and social reality. Along with his sculptural practice, Araeen also became deeply involved in postcolonial activism during his years in London and founded, among others, the hugely influential journal Third Text in 1987, dedicated to the lack of representation of black and asian artists in Britain, and wrote several statements, manifestos and performances on the topic, all for him “textual forms of art.” 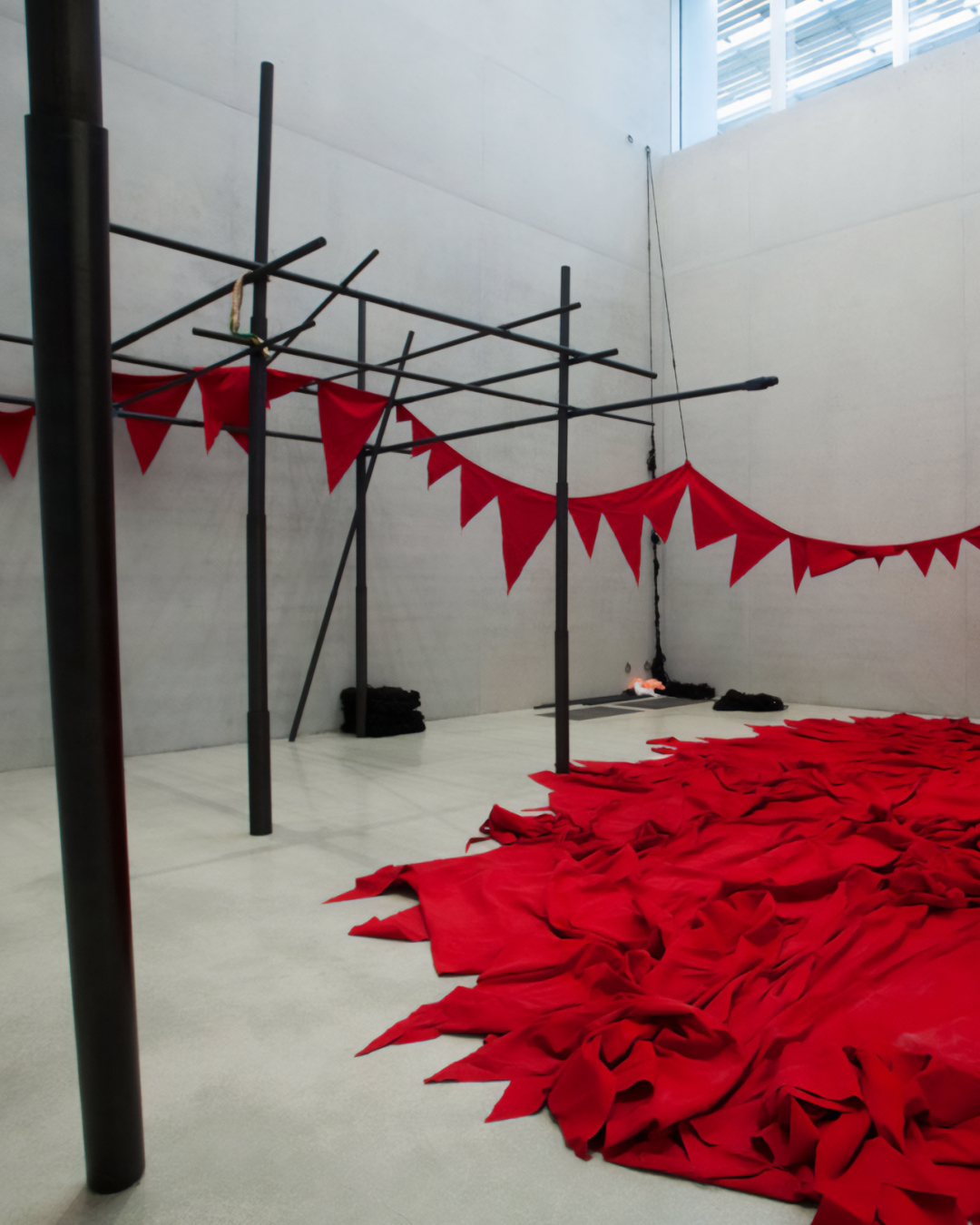 Sheela Gowda. And that is no lie, 2015. Textile, thread and mixed media. Installation view. Courtesy of Perez Art Museum Miami

Born in Bhadravati, Karnataka and based in Bengaluru, Sheela Gowda creates large installations, often suspended in space, in which the process of creating the work matters as much as the finished piece. Gowda is drawn to the social, ritualistic and spiritual life of rural India, and pays homage to the everyday labour of its people in her installations, not least of all by embracing materials such as cow dung, incense and kumkum powder as the foundation of her work. “Handling a material makes me understand its limitations and its potential,” says the artist, and does not outsource the physical labour in transforming these materials into massive artworks. At core, Gowda’s practice can be experienced as meditations on the nature of work itself. The artist has been shown at many international venues, including Behold (2009) at the 53rd Venice Biennale, a seminal work made of 4000 metres thick rope hand-woven from hair. 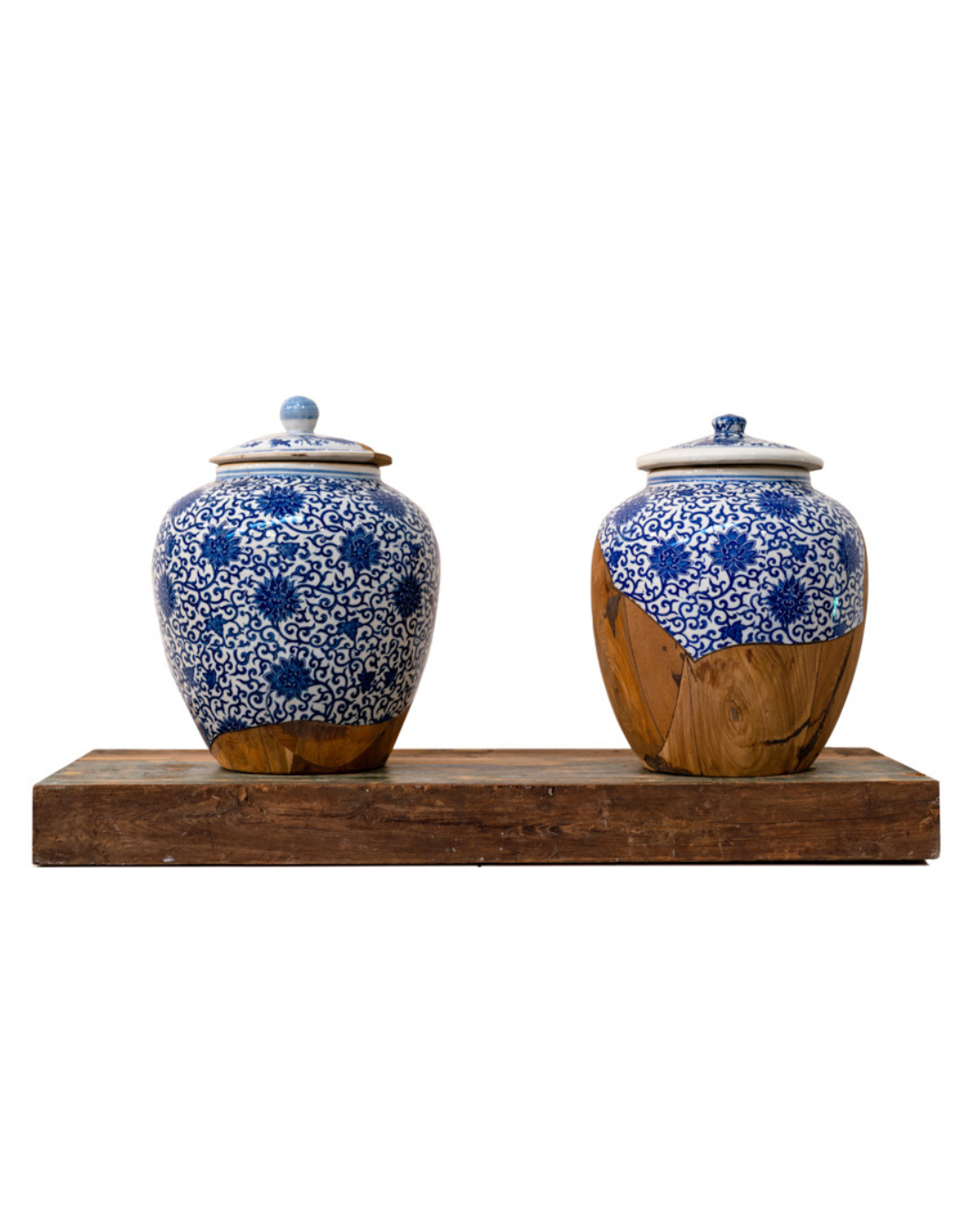 “I have no choice but to be a sculptor,” says Sudarshan Shetty, one of India’s most internationally shown artists, known for his mechanised installations of everyday domestic objects in playful and surprising configurations. Born in Mangalore, Karnataka and brought up in Mumbai, Shetty’s works are underpinned by existential concerns of death, transience and futility, but conveyed with pomp and drama, in a style the artist has called ‘fairground spectacle’. Among the artist’s most iconic works are History of Loss, shown at Frieze in 2008 and later at the Vancouver Biennale, in which the artist dropped aluminium replicas of cars from a height of 300 feet, and this too shall pass, a site-specific installation at Mumbai’s Bhau Daji Lad Museum in 2010, made up of dioramas of cars, furniture, skeletons and more, bringing moments from the streets into the space of the museum. 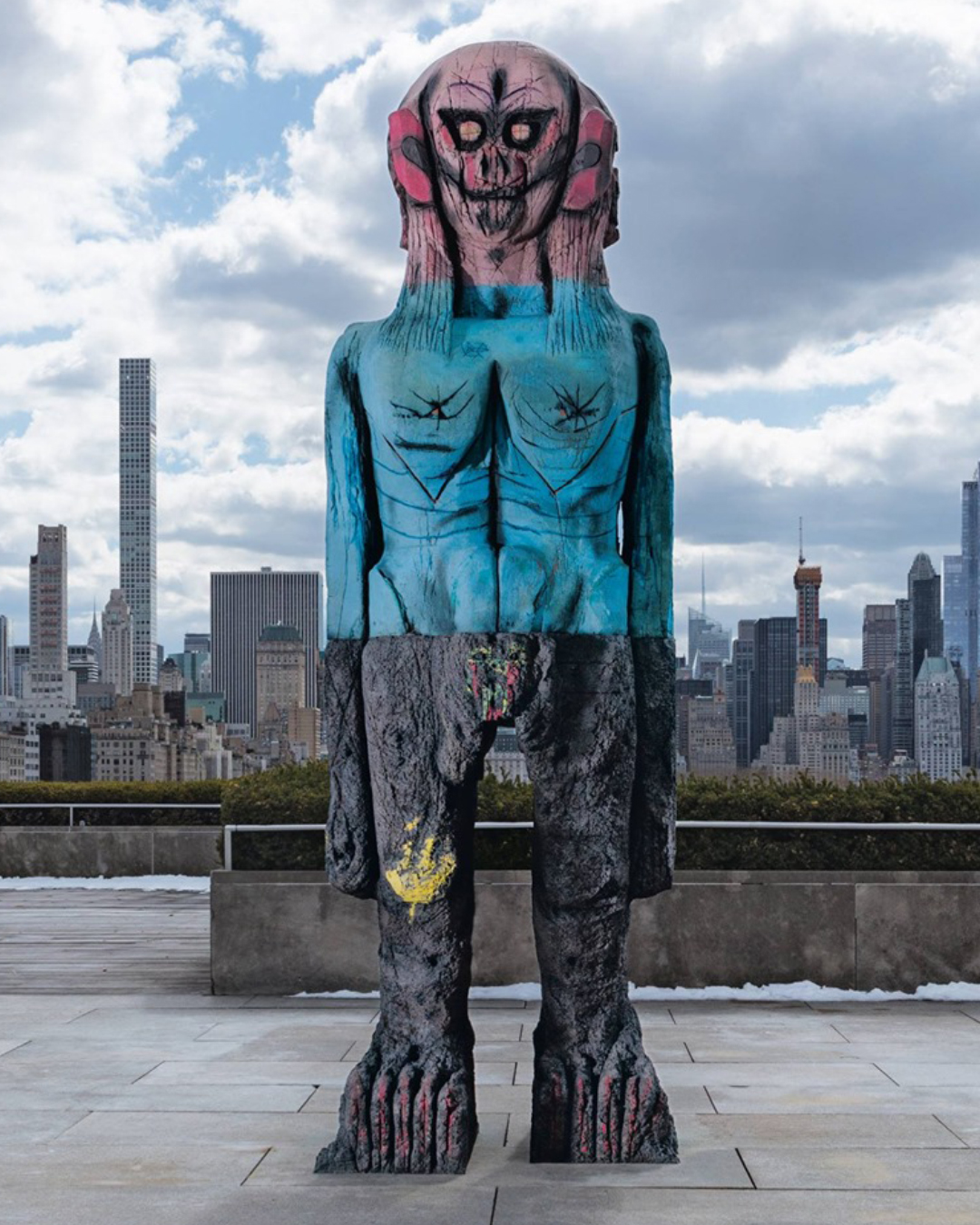 Originally from Karachi, Pakistan, Huma Bhabha is one of South-Asia’s most recognisable sculptors based in Poughkeepsie, New York. The artist is best known for her monumental ‘monsters’ that pay homage to the marginalised and outcast. Drawing from her upbringing in newly-formed Pakistan and a wide-ranging artistic influences that range from Cubism and Classicism to African arts science fiction, Bhabha creates figures that are at once grotesque and tender. These imposing beings, whom she calls ‘characters’, seem at once remnants from the ancient past and survivors of a post-apocalyptic future, and call attention to histories of colonialism, conflict and human displacement. Bhabha works with found materials such as styrofoam, clay, cork and rubber to make works that are hybrid and tentative, sculptures that often become models for her iconic bronze cast works. Several of Huma Bhabha’s monsters have lived out in the world, from Receiver in Wakefield in the UK to We Come in Peace on the rooftop of the Metropolitan Museum of Art in New York. 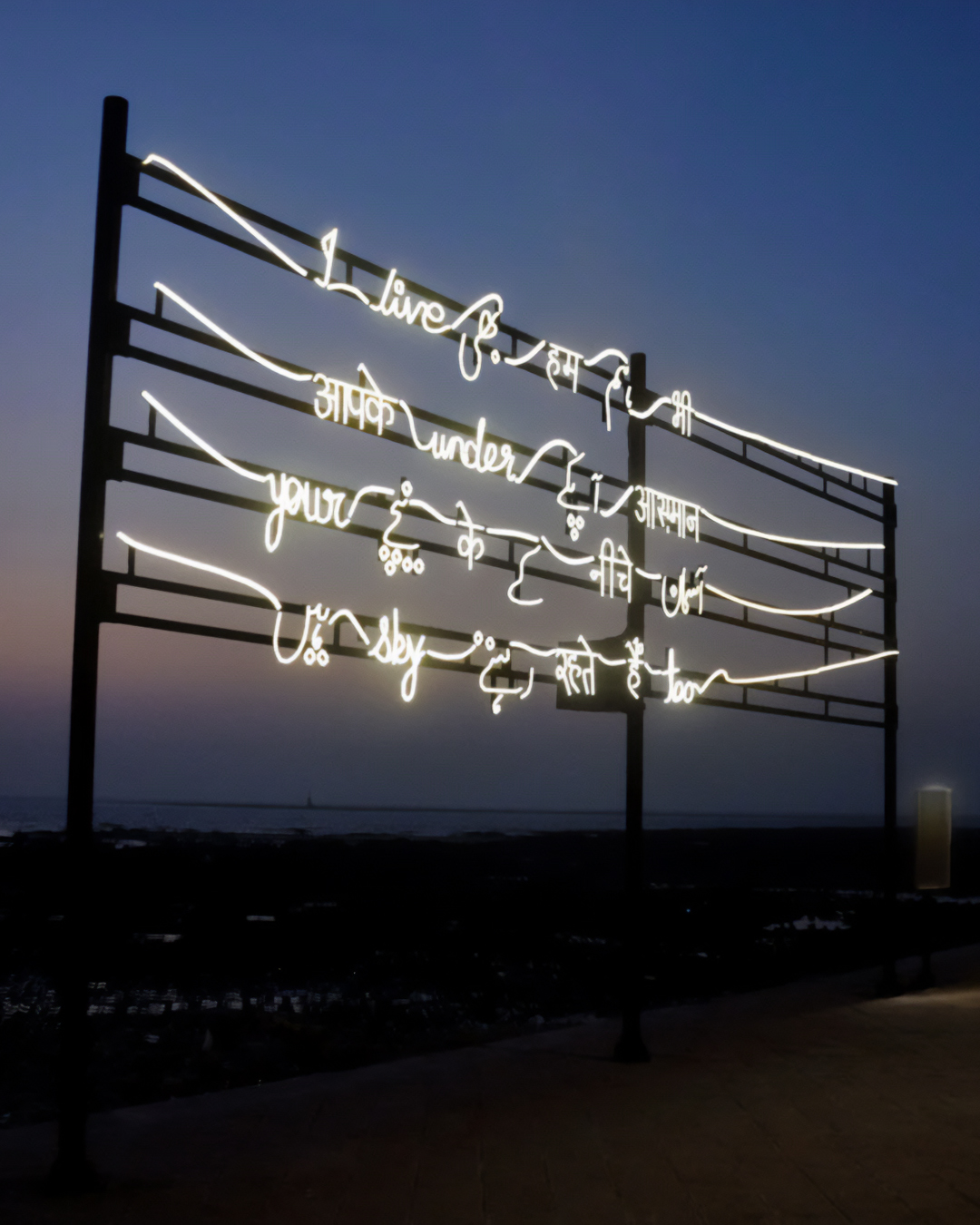 Shilpa Gupta. I Live Under Your Sky Too, 2004-2013. Animated light installation. Courtesy of Vadhera Art Gallery

We are all part of Shilpa Gupta’s works, dynamic and participatory experiences crafted to make viewer-participants relook at the social structures around them. Gupta has been interested in themes of sectarianism and political division throughout her career, influenced deeply by the Bombay riots of 1990s and her experiences at the border regions of Kashmir and Bengal. In her works, she invites us into these concerns, be it through her 2000 work Blame in which she posed as a salesperson and peddled bottles filled with simulated blood labelled ‘Blame’, or the 2008-9 Threat in which viewers could take away bars of soap from the exhibition engraved with the word ‘Threat’, to activate difficult concepts such as identity and fear. Words and text have been a key element of the artist’s work, for her a core part of “how we see and comprehend what surrounds us”. Most iconic of these is perhaps her installation, I live under your sky too, standing tall on the Mumbai seafront since 2004 and featuring the title text in English, Hindi and Urdu in glowing lettering. 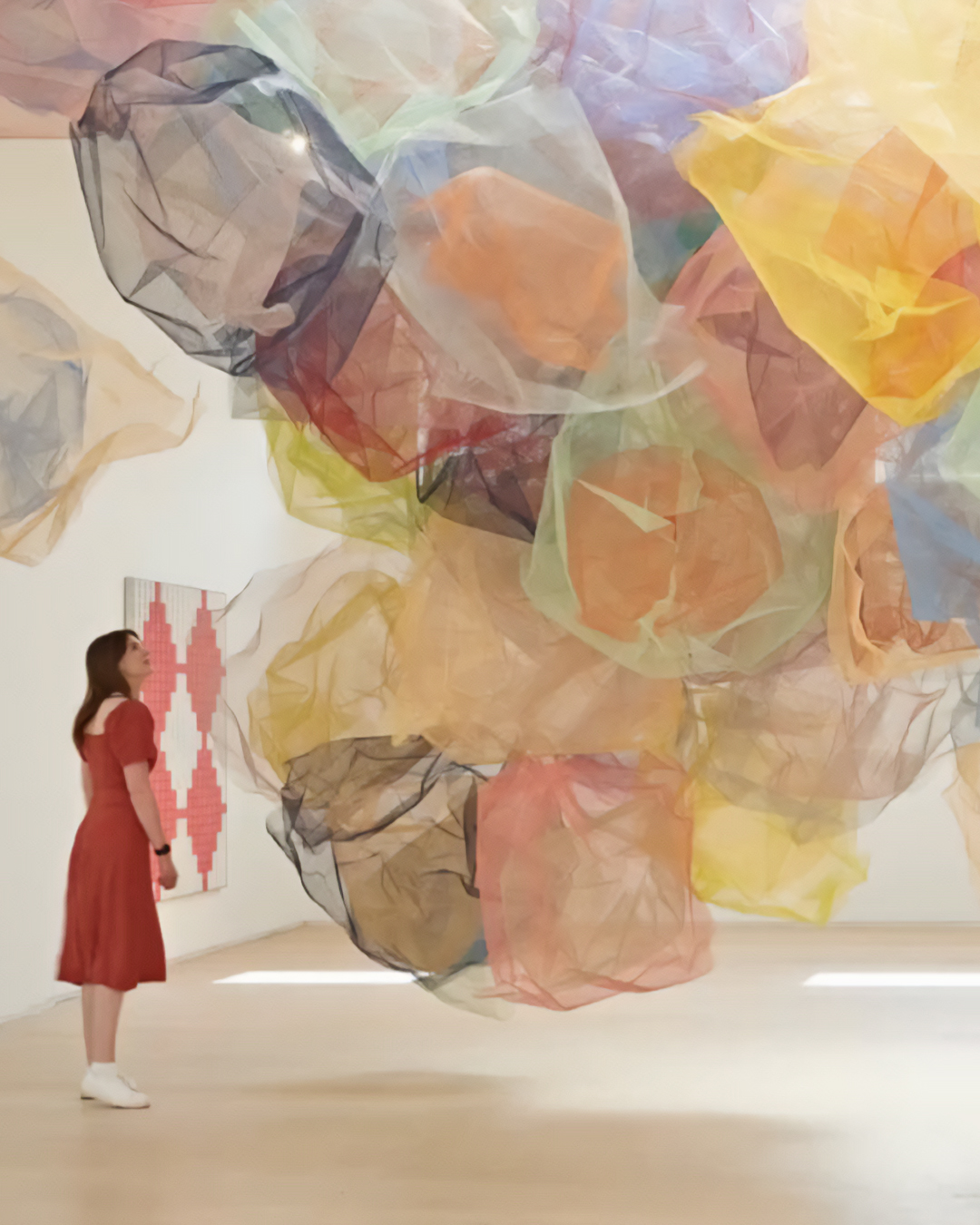 Born in Sylhet, Bangladesh and based in London since 1983, Rana Begum melds sculpture, painting and architecture to create studies in colour, light and geometry. Begum’s works, be it small metal folds or expansive mesh-forms, are instantly recognisable for their minimal abstraction, inspired by artists such as Agnes Martin and Donald Judd, and an exuberant sense of colour. The repetitive geometry in her work evoke both the city she lives in and the Islamic architecture of her childhood, and give her sculptures an inherent sense of movement. As she says, “my use of repetition gives rise to the idea of the infinite, which in turn evokes a sense of the spiritual.”

Born in Sylhet and based in Dhaka, Bangladesh, Promotesh Das Pulak’s sculptures explore the dichotomy between organic natural elements and weapons of war that co-exist in the region. In many of Pulak’s memorable works, we see objects like bombs, guns, blades and gas-masks adorned with delicate white shola or cork flowers that grow in the Gangetic Delta. The contrasting material combinations speak to a betrayal of innocence in contexts of socio-political unrest, while harkening back to the centuries-old artistic tradition of embellishing weaponry with ornament. Besides his iconic shola flower sculptures, the artist also creates multimedia installations, such as in his Dark Tales made in 2021, a kinetic sculpture featuring stencilled drawings of photographs of catastrophic political events, suspended among lights. 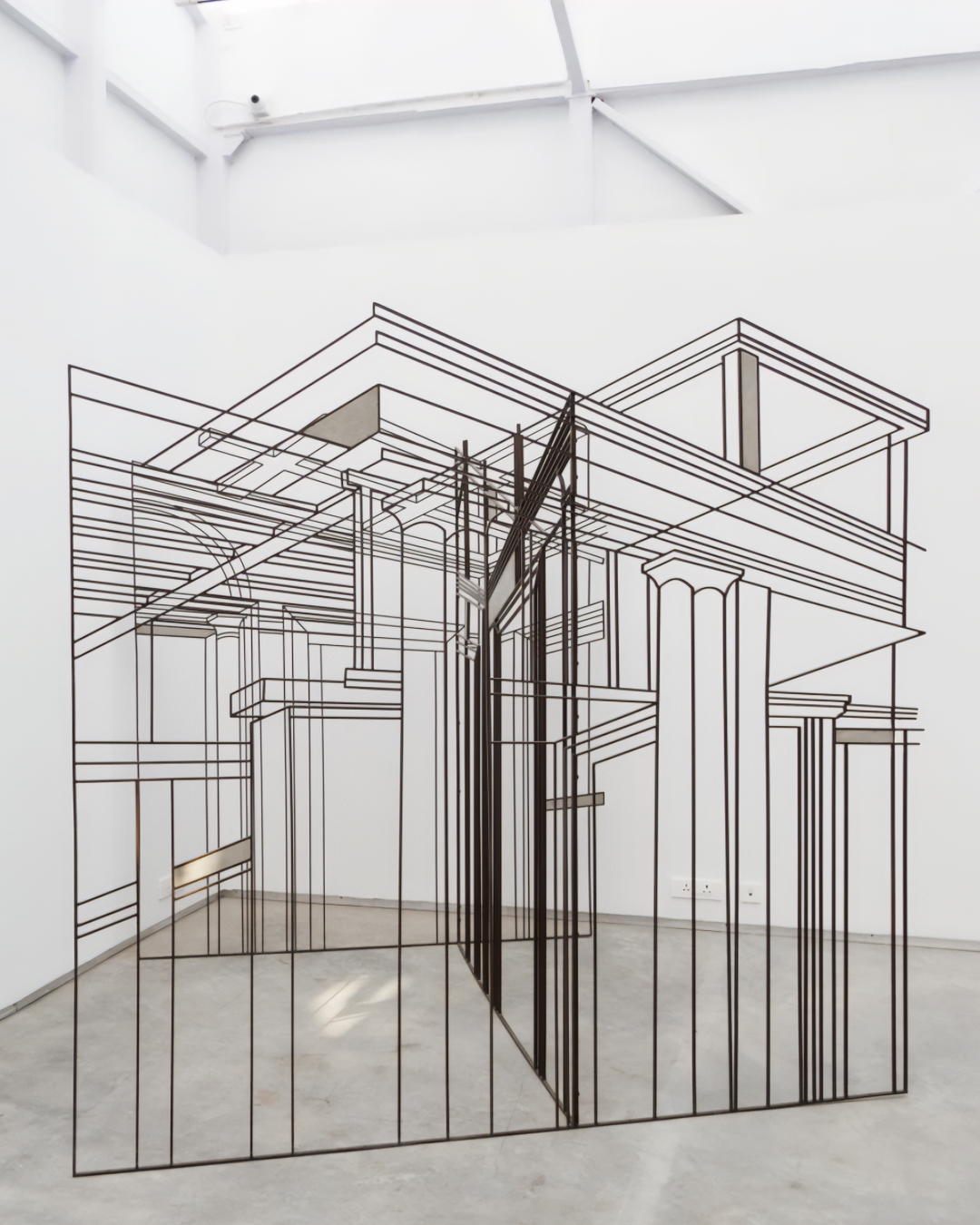 Rathin Barman. I wish to let you fall out of my hands (Chapter II), 2018. Welded steel and brass. Installation view. Courtesy of Experimenter

Born in Tripura and based in Kolkata, Rathin Barman sees urban spaces as holders of personal and collective memory. Trained as an engineer before starting his career as a sculptor, the artist works in construction materials such as wood, concrete, brick and metal that evoke the framework of our cities and reflect on their constantly shifting nature. “The city is a political phenomenon,” says Barman, informed as much by social and historical research as by conversations with people about ideas of home, the city and migration. In 2012, Barman was one of the first South Asian artists to be included in the Frieze Sculpture Park for which he created a rendering of its site, Randall’s island, in manipulated iron bars and rubble from the surrounding areas. 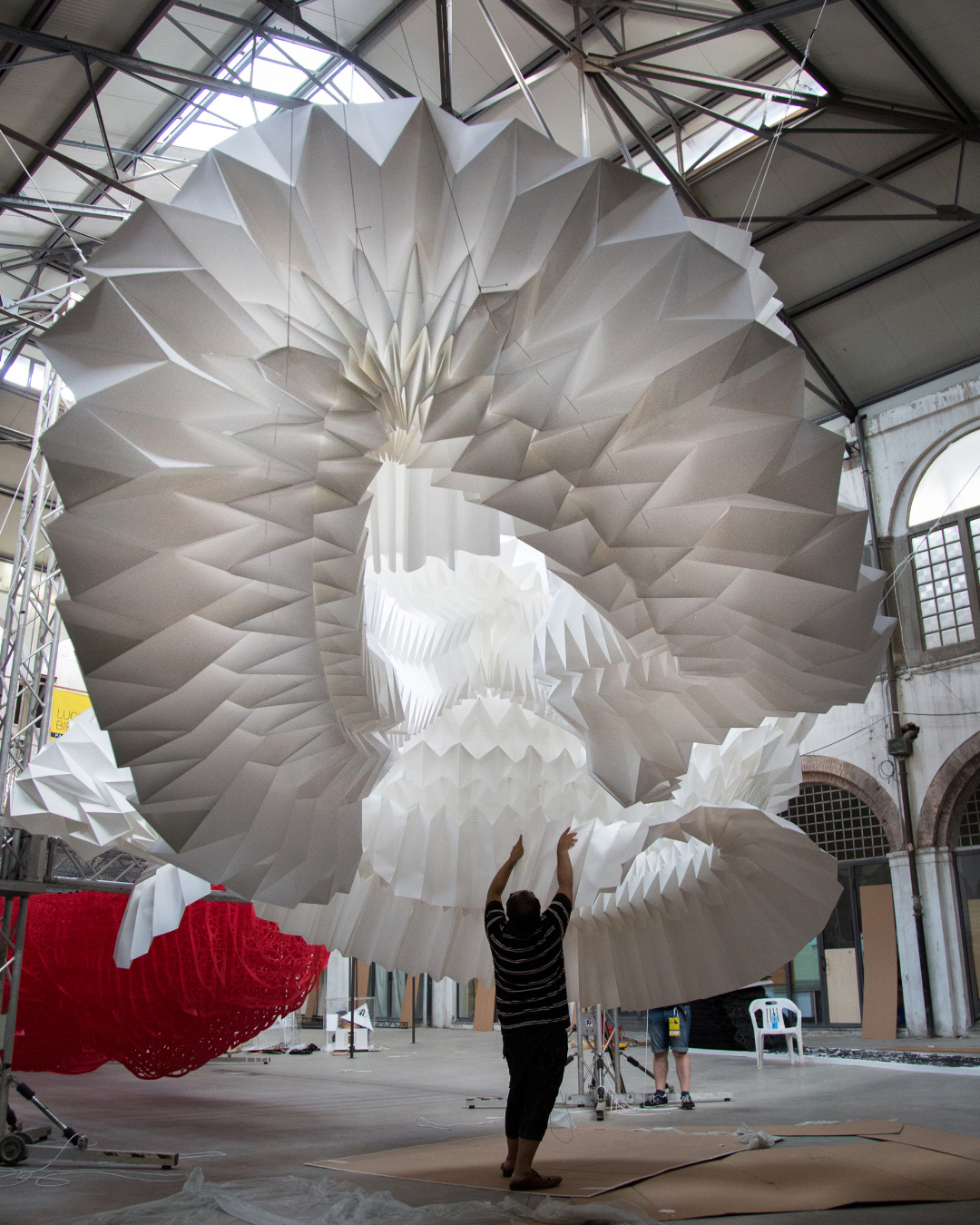 Ankon Mitra. The Sights and Sounds of the Cosmos, 2018. Polypropylene hand-folded, nylon cords. Courtesy of the artist

Delhi-based sculptor Ankon Mitra produces hypnotising works that combine Japanese origami and architectural techniques to create a unique style that has been given the name, ‘oritecture’. A master of paper, Mitra sees folds as the fundamental principle in the world and beyond, from our interlocking DNA strands to mountain ranges and even gravitational fields in outer space. The artist’s love of astronomy has inspired many of his most iconic works, such as The Parting of Galaxies, in which folded polypropylene forms and LED lights evoke the swirling movement of stars in the cosmos. Best known for his sculptures made of hand-stitched and folded goat-hide, Mitra has set himself the ambitious challenge of creating sculptures using a hundred materials by 2023, of which he has already covered concrete, terracotta, silk and even chocolate!