Your introduction to the life and work of painter, printmaker and sculptor, Lalu Prasad Shaw, one of India’s most unique modernists

At 85, Lalu Prasad Shaw is one of the most beloved artists in India today. Best known for paintings, printmaking and of late, sculptures, his work is marked by a vibrancy, playfulness and simplicity. Deeply immersed in the Bengal School of Art and yet in a world of its own, Shaw’s one-of-a-kind vision and perspective shines bright in his art, reflecting on both the social and inner lives of 20th century Bengal. Here, we highlight three things you absolutely must know about the artist.

His art is rooted in the folk traditions 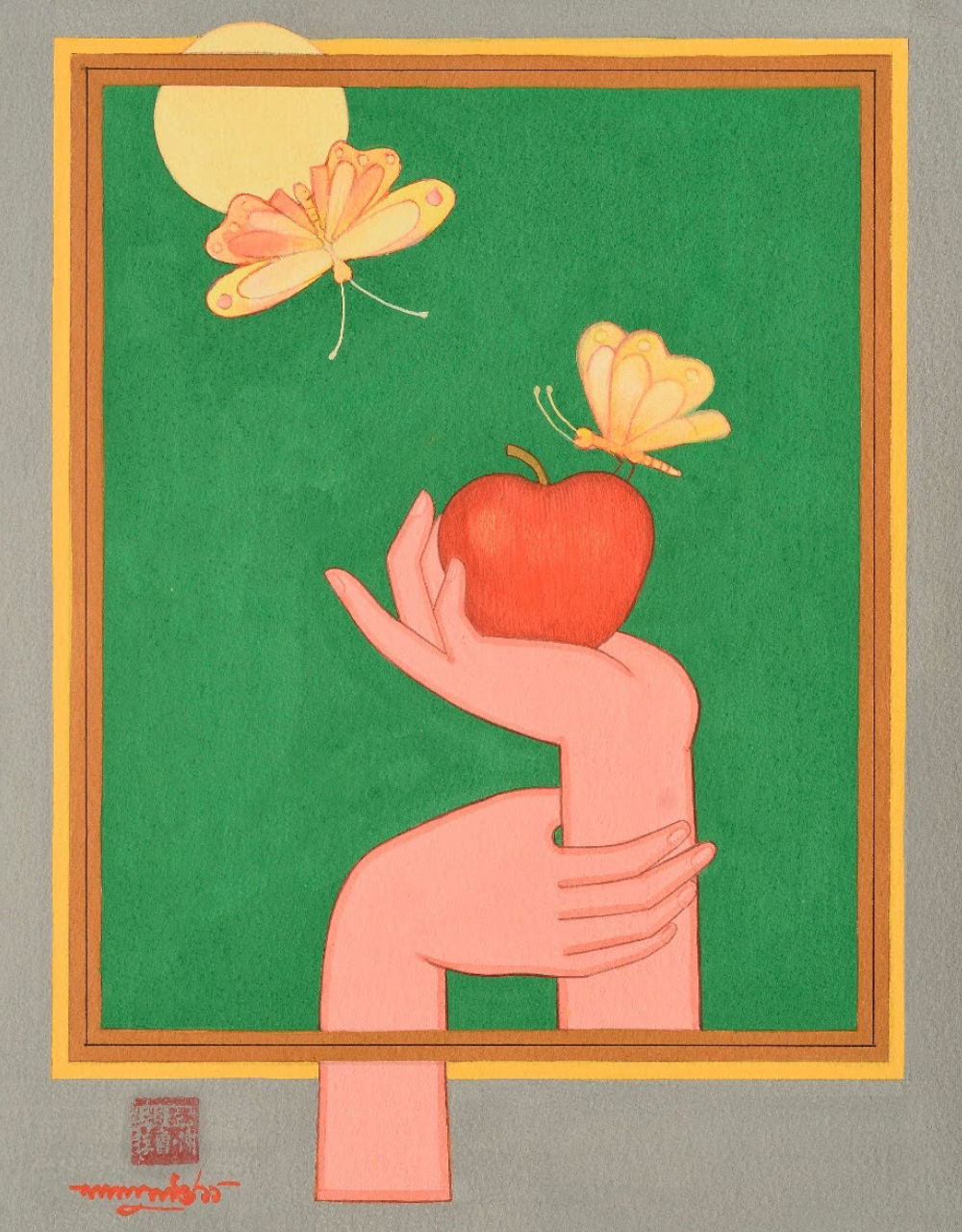 Deeply inspired by his surroundings, the influence of Kalighat and pat paintings shines through Lalu Prasad Shaw’s works. Untitled, Tempera on Board, courtesy of the artist and Gallery Art Exposure

Born in 1937 in rural Birbhum in West Bengal, Shaw’s passion for the arts developed at a young age, watching the community of Malakars sculpting clay idols of Goddess Durga on his way back from school, and copying works of Gaganendranath Tagore and Abanindranath Tagore from news dailies at home. His passion led him to pursue an education at the renowned Government College of Arts and Crafts in Kolkata, where he was trained in a Western curriculum that included British watercolour and Italian chiaroscuro. However, in his own practice, Shaw drew from the art closer to home, from ancient Ajanta paintings and Mughal miniatures to traditional Kalighat paintings and the growing field of studio photography, to create a unique painterly vocabulary that has been the artist’s most crucial contribution to Indian modern art. 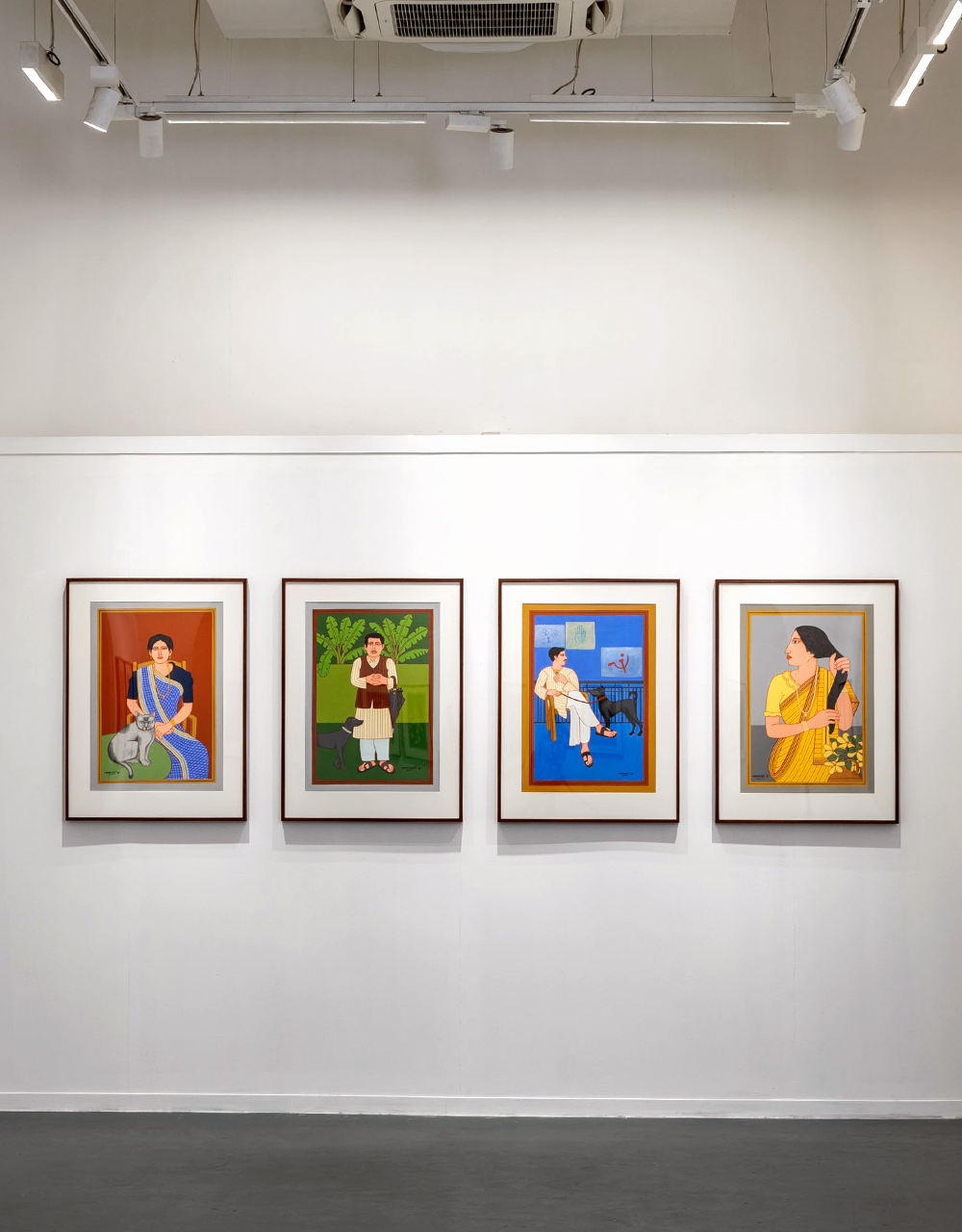 Drawing from his immediate surroundings and everyday life, Shaw is known for his portraits of the Bengali upper-middle and upper-intellectual class, all with his characteristic humour and irony. Be it a woman holding a mirror or perhaps a mango, or a man carrying a bag or smoking a cigarette, Shaw conjures narratives with only a few elements, and brings them to life with bold fields of colours in gouache and tempera. The artist was first struck by the mannered lifestyle of the Bengali bhadralok, made up of genteel babus and bibis while working at a photography studio in Kala Bhavan, Shantiniketan, and has been fascinated with the subject ever since. In his own words, “the Babu and Bibi now aren’t just subjects of my artworks, they are my family!”

He is a master of printmaking and sculpture

Shaw’s prints are marked by simplicity of form and a unique approach to composition. Lalu Prasad Shaw’s Linocut, courtesy of the artist and Gallery Art Exposure

A prolific painter, Shaw took to printmaking at the age of 32 and began transforming his earlier sketches into abstract prints, and experimenting with etchings and lithography under the guidance of legendary Indian printmaker, Somnath Hore, at Kala Bhavan, the modernist art school in Shantiniketan in West Bengal. The complex and geometric prints by Shaw from this time in the ‘60s gained him new acclaim, in addition to his already established career as a painter, and even caused somewhat of a resurgence of printmaking in the region in the late ‘60s. In 2017, at the age of 80, the artist presented his first show of bronze sculptures, depicting his favoured Bengali bhadralok characters in three dimensions yet with Shaw’s characteristic simplicity of form. Explaining his move to sculpture, the artist says, “Once you have the inspiration for the artwork, the medium doesn’t matter much.”

Lalu Prasad Shaw lives in Kolkata, West Bengal, where he continues to make works inspired by the everyday life of its people.