One of the birthplaces of Indian modern art and a thriving hub of emerging artists, Vadodara is a must-visit city for any culture lover

Located on the banks of the Vishwamitri River in Gujarat, Vadodara, also known as Baroda, has always been a hot spot for all things art and culture. Particularly under the Gaekwad dynasty, spanning from the 18th century till the country’s independence in 1947, the city underwent a cultural renaissance, attracting craftspeople, artists and creatives in large numbers, who together contributed to the dizzyingly vibrant cultural landscape of Vadodara that we see today.

In this, the role of the Maharaja Sayajirao University, established in 1881, cannot be understated. It was here that the influential Baroda School of Art was founded by some of India’s most legendary modernists, including Jyoti Bhatt, Shanti Dave and K.G. Subramanyan, carried forward by contemporaries like Laxma Goud, Nasreen Mohammedi and Bhupen Khakhar, and being continued to this day by young and emerging artists from the school.

Read on for your go-to guide for all things Vadodara—the unmissable art spots, magnificent royal palaces and ancient historic sites that give the city its title of ‘The Jewel of Western India’.

Step into Vadodara’s royal past 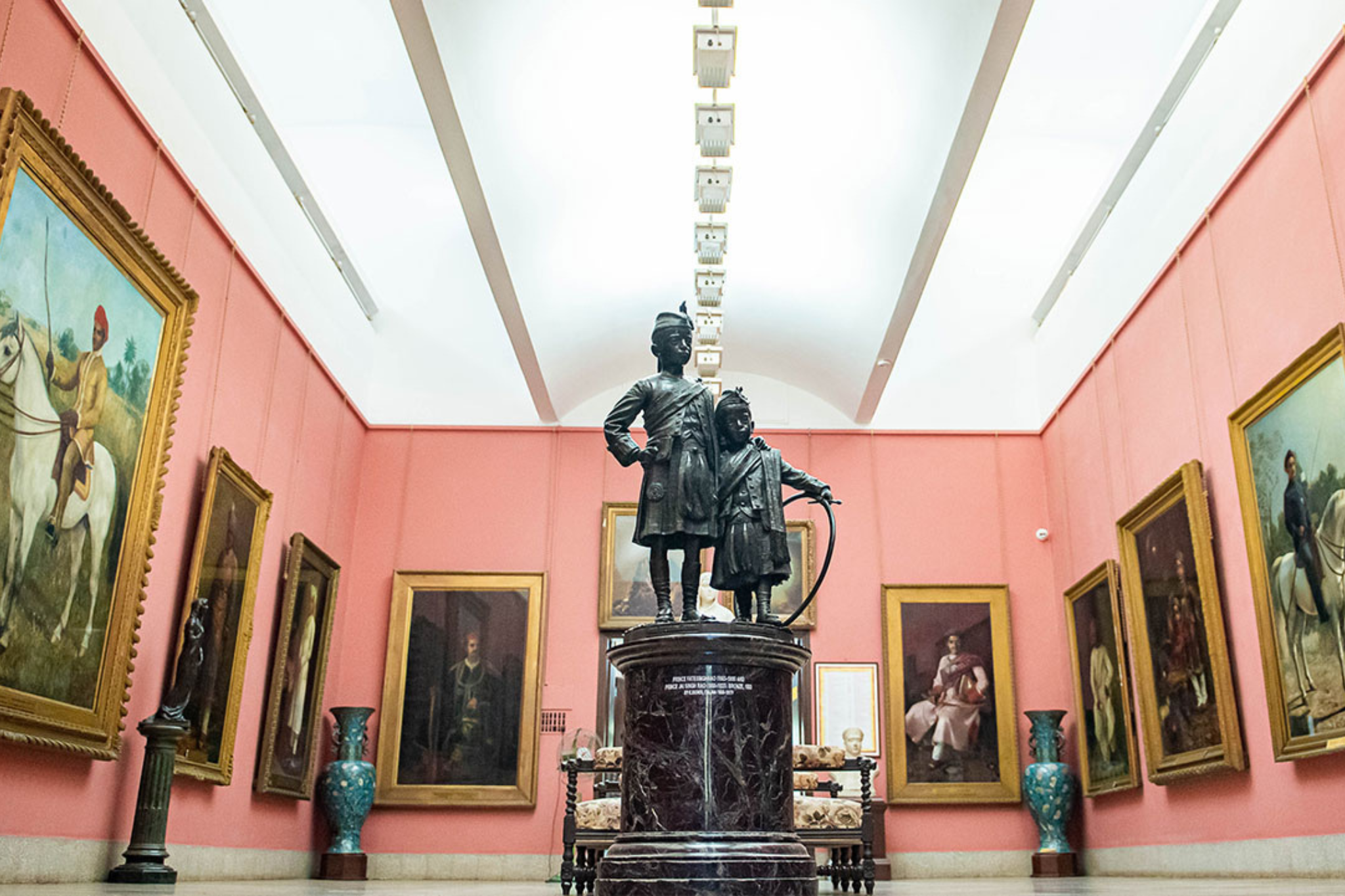 The Maharaja Fatehsingh Museum, housed within the Lakshmi Vilas Palace in Vadodara, displays a vast collection of Raja Ravi Varma’s paintings and is a popular destination for both tourists and city dwellers

Begin your visit with a day at the magnificent Lakshmi Vilas Palace, commissioned in 1890 by Maharaja Sayajirao Gaekwad III, and designed by Charles Mant and Robert Chisholm, pioneers of Indo-Saracenic architecture notable for its melding of European and South Asian styles which came to be iconic of the British Raj era. As you walk through the grounds towards the sprawling palace, four times the size of Buckingham Palace, take note of the many bronze sculptures by the renowned Italian artist, Fellici Casorati. Inside, a special highlight is the Gaddi or Coronation Hall, with its large paintings of Hindu gods and goddesses by Raja Ravi Varma, known as the father of modern Indian art and who lived at the Palace for 14 years under the patronage of the Maharaja. Also notice the countless pieces of royal armoury and weaponry that adorn the halls, lit by glass chandeliers and stained glass windows.

Not far from the Palace is the city centre, and the Mandvi Gate, an imposing square pavilion with layers of arched gateways built in the Mughal period in the 1500s. The Gate is now a centre of public celebrations in the city, and if your visit coincides with a festival, you will find it beautifully lit up in the evening. Closeby, stands the historic Baroda Central Library, constructed in 1906 to facilitate the introduction of compulsory and free primary education in Baroda by the Maharaja, and holds some priceless objects including a special collection of miniature books.

Before leaving the city centre, don’t miss a trip to the Tambekar Wada, a traditional Marathi mansion, deceptively plain on the outside but covered from floor to ceiling with exquisite 19th century murals on the inside—telling stories of ancient Hindu epics, Anglo-Maratha wars and everything in between in vibrant colour and miniatures. 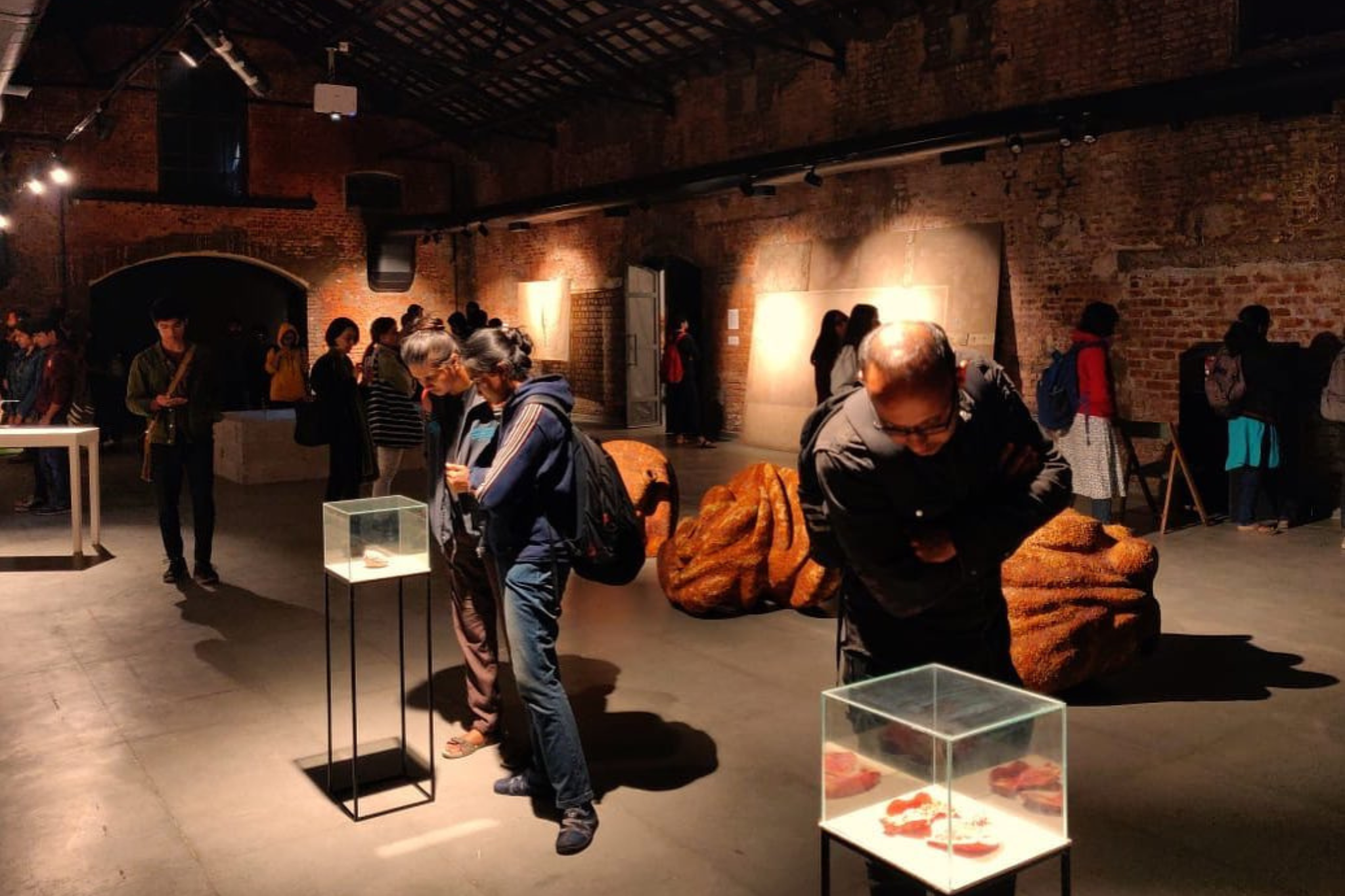 A popular spot for finding the best in contemporary art, Space Studio in the Alembic art district promises a great art experience

Home to an ever-increasing number of artists and creatives, Vadodara is full of art spaces, studios and galleries. But before meeting the young artists of the city, brush up on your art history with a visit to the Baroda Museum and Picture Gallery, located among the beautiful gardens of the Sayaji Baug in the north of the city. Among its impressive collection of art, sculpture and ethnographic objects are some incredibly rare 5th century Jain Akota bronzes, gem-like Mughal miniatures and large paintings by iconic British painters like J. M. W. Turner and John Constable.

For those looking to dive into the contemporary art scene, begin with a visit to Space Studio, an independent art space set up in an old distillery plant in the Alembic art district in the north of the city. Functioning as a residency with a museum, outdoor amphitheatre and even a skatepark, Space Studio has hosted some of the most exciting emerging artists in the country including Gurjeet Singh, Yogesh Ramakrishna and Farah Mulla. Next, check out The Ark Foundation, also in the industrial area, renowned for its impeccable collection of works from the Baroda School by greats including Nasreen Mohamedi, Gulammohammed Sheikh and Jyoti Bhatt.

In the West of the city, Gallery White is one of the premier art galleries in the city, who along with showing some of the most prominent artists of Indian contemporary art, also hosts annual exhibitions featuring fresh-out-of-school graduates from the Fine Arts Faculty of the Maharaja Sayajirao University. Not far, the Baroda wing of the Mumbai-based Priyasri Art Gallery, AQ@Priyasri is a thriving studio space dedicated to nurturing young artists and creatives. For those looking for yet more art, further West, in the neighbouring village of Jaspur, stands the Uttarayan Art Foundation amidst an 80-acre farm, complete with a sculpture garden, museum and studio spaces where artists have free reigns to experiment, ideate and create. 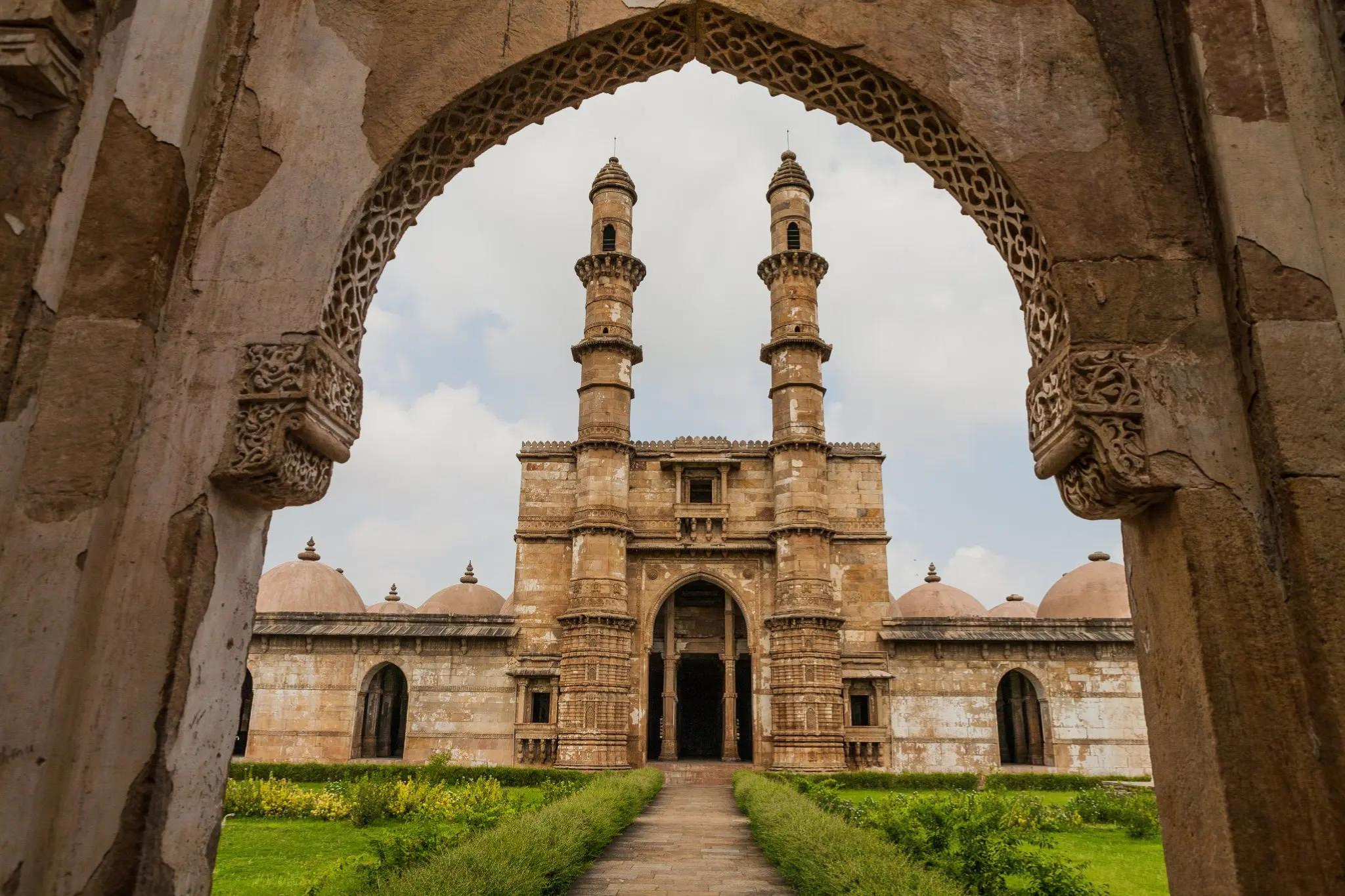 A world heritage site, the Champaner-Pavagadh Archaeological Park has remained mostly the same since the time its foundation was laid in the 15th century

Even Vadodara’s religious sites are a feast for an art-lover’s eyes. Kirti Mandir, also known as Temple of Fame, in the city centre, is the royal cenotaph of the Gaekwad dynasty, and features an intricately carved 35-metre high shikhara, the central tower-like structure of many Hindu and Jain temples, adorned with bronze figures of the Sun, the Moon and the Earth. What’s more, the temple’s interiors are covered in murals depicting scenes from the Mahabharata and other epics by the iconic painter, Nandalal Bose, as well as rare works by Raja Ravi Varma.

With an unimposing facade in the busy Mandvi Gate area, the Jumma Masjid of Vadodara is one of the oldest, first built in the 1400s and refurbished in 1912. The Mosque opens up into a beautiful courtyard on the inside, lined with rows of arched columns and minarets, leading to the main prayer hall. For more than 200 years, the mosque held Asia’s largest Quran, weighing almost a hundred kilograms.

Last but not least, anyone interested in knowing more about the incredibly layered history of the region, home to communities and dynasties of many faiths across the ages, a visit to the Champaner-Pavagadh Archaeological Park is a must. Only an hour away from the city-centre, the UNESCO World Heritage Site is full of remnants of human settlements in the region dating all the way back to the 4th century. In this labyrinth of ancient tombs, temples, mosques, stepwells, arches and fortresses, pay special attention to the ornately carved Hindu and Jain temples on Pavagadh hill built between the 10th and 15th centuries, and the Jama and Kevada Mosques from the 16th century in the Champaner area of the Park, almost unchanged since the Mughal era.