Raja Ravi Varma’s depictions of women are often dismissed as sentimental or idealised, but his Mahaprabha sits apart from these dainty goddesses. Historian Manu S. Pillai writes about the magisterial woman whose dark, forbidding gaze inspired this little-known painting

Sometime in the late 1880s, the celebrated painter Raja Ravi Varma produced a portrait of his formidable mother-in-law. It was, and remains, an extraordinary painting, depicting as it does a woman of forbidding character, without softening either her powerful gaze, or her distinct physical features. After all, Ravi Varma was a man who contributed to the emerging Indian ideal of feminine beauty with his fair-skinned, doe-eyed puranic heroines, whose general demeanour is one of tender piety. Not in this painting, though, where his richly human subject is unapologetic about her dark complexion, bloodshot eyes, and imperious glare. Indeed, she represents in a single frame the reality of the Malayali woman, even as her son-in-law was helping recast perceptions about womanhood itself.

It was in 1866 that Ravi Varma married the daughter of Mahaprabha of Mavelikara. Hers was an old line descended from the Kolathiri Rajahs in North Malabar, though actual power had long abandoned the family for the British. They did, however, retain a special status: every time the matrilineal royal house of Travancore in southern Kerala ran out of female heirs, it was from this line that they adopted young girls. Mahaprabha’s great-grandmother’s sisters had been installed as queens in Travancore in the late eighteenth century, for instance, while in 1858 two of her daughters were also adopted and transformed into princesses in Trivandrum. Her youngest, however, remained in Mavelikara with her, and it was this girl’s destiny to become the unhappy wife of Ravi Varma.

The turbulence in Ravi Varma’s married life is well known. Described by a descendant as a “down to earth, plain, unimaginative woman”, the young bride could not quite comprehend why her aristocratic husband felt the need to take up a career at all, let alone one so peculiar as painting. Once, when the artist returned from his usual pan-Indian peregrinations with a Murano glass chandelier, his furious wife had it thrown out of the window, smashing it to pieces. The marriage, in other words, was a veritable disaster, and eventually, the lady became, as her nephew would write,“addicted to drink”. In 1891, somewhat predictably, she died an untimely death. Her husband was in Bombay and did not return for her cremation, acting as an absentee father to their five children. 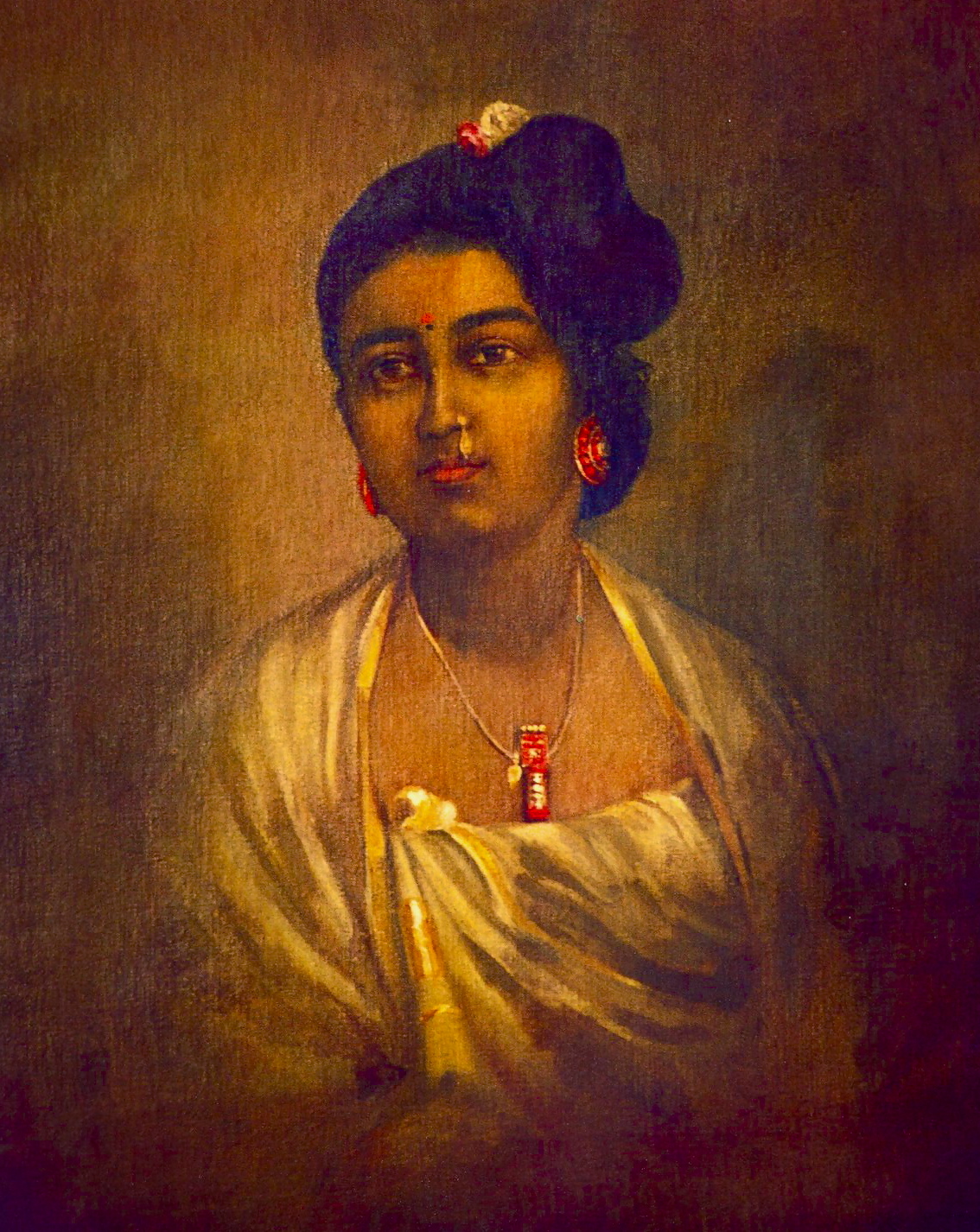 But while the chaos in Ravi Varma’s personal life is acknowledged by biographers, an episode featuring his mother-in-law does not, strangely, appear in any accounts of his life. Given the sordid nature of the incident, this omission is even more striking, hinting perhaps at censorship by his earliest storytellers, who used the myth of Ravi Varma to mask the man behind it. The result is that an important detail concerning his marital home has effectively been expunged, shielding the painter from any reflected ignominy. A further reason to banish all the talk of the scandal may also have been the Mavelikara family’s royal ties — in 1900, even Ravi Varma’s granddaughters would be adopted into the ruling dynasty, and tales such as this could have been permanently buried in the interests of their dignity.

“Sometime in the late 1880s, the celebrated painter Raja Ravi Varma produced a portrait of his formidable mother-in-law. It was, and remains, an extraordinary painting, depicting as it does a woman of forbidding character, without softening either her powerful gaze, or her distinct physical features.”

The whole controversy occurred around 1862, four years before Ravi Varma’s wedding. On the face of it, it was a straightforward affair. A male servant in Mavelikara called Madhavan was accused of stealing certain jewels: “twelve gold ornaments for the waist,” one account tells, “and a pair of diamond earrings”. The man was apprehended by Mahaprabha’s husband — i.e. our painter’s future father-in-law, who was also, incidentally, named Ravi Varma — and punished. In the process, the servant was killed, and as a newspaper recapitulation notes, his body was “hung up in a bathroom, to produce the idea that death was the result of suicide.” Not only had Madhavan been beaten (including with a giant jackfruit) and stabbed, an attempt had even been made to gouge out his eyes. 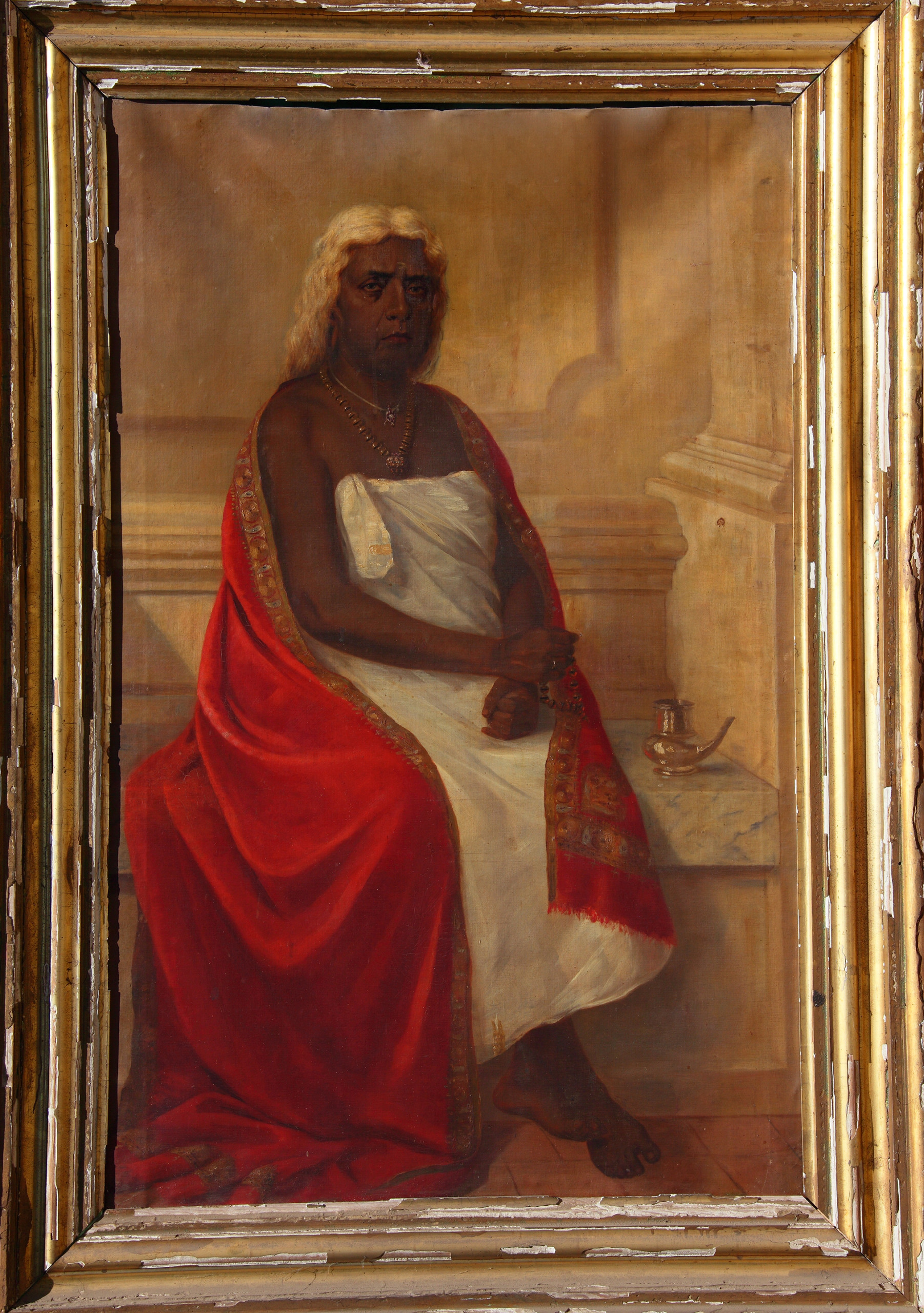 This alone was horrific, but it was made worse by the fact that the chief accused was the father of the adopted Ranis of Travancore. As the reigning Maharajah’s brother wrote, “this [was] the first instance in our memory of a man [of such a high rank] having committed so heinous a crime” and he hoped that “the case will be so dealt with as to make it the last.” As it happened, though, the policemen on the ground did not share the prince’s enthusiasm. Given that Mahaprabha’s husband was an influential figure, the investigation was deliberately lax so as to give, in the disapproving words of Travancore’s chief minister, “time to the culprits to tamper with the evidence”. Interestingly, there was also considerable gossip in the Madras papers around the “Travancore Scandal”. As the Cochin Courier reported, stolen jewels had nothing to do with the murder. In actual fact, the paper claimed, Mahaprabha’s husband had “for some time entertained suspicions of an illicit intimacy” between his wife and the servant, till one day he decided to simply put to death “the disturber of his domestic felicity.” This charge was, of course, denied. But under the personal supervision of the chief minister Sir T. Madhava Rao — who was one day to play a leading role in promoting Ravi Varma — matters went to court. And by 1864, Mahaprabha’s husband was sentenced to “hard labour for life in irons”, though in a concession to his aristocratic birth, this was later reduced to simple life imprisonment.

“So it was that Ravi Varma married into a family that was tainted by one of the most outrageous scandals to have shaken the royal court and its wider networks.”

So it was that Ravi Varma married into a family that was tainted by one of the most outrageous scandals to have shaken the royal court and its wider networks, not to speak of gossip about the old lady he was to paint in the 1880s. It is a unique canvas, in that sense, for the magnificently bold Mahaprabha who appears in this frame is more than the woman we encounter at first glance. In reality, the person Ravi Varma depicts here was his mother-in-law, a lady of royal blood, mother to Travancore’s queens — and, in what seems to have been wilfully forgotten, a key figure in one of the most shocking crimes of her generation.

Manu S. Pillai is a historian, author and journalist. He has produced numerous, award-winning works of historical non-fiction including The Ivory Throne: Chronicles of the House of Travancore (2015).