Founder-Director of pioneering art gallery, Gallery Espace celebrating 30 years since its founding, Renu Modi remembers modernist M.F. Husain as the artist who taught her how to look at art

Those were exciting times for Indian art. Two major art auctions had taken place in India in 1989 — the Timeless Art auction in Mumbai and the Sahmat auction in Delhi — and both had a major impact on the Indian artscape. The wheels of the market had started moving, new collectors had come up, awareness of art had increased, and the media had started covering art extensively.

A big part of those years was a singular figure, Husain sa’ab, known to the world as M.F. Husain. My long and often informal conversations with Husain sa’ab greatly impacted my vision and programmes for the gallery, then in its infancy. The way I looked at art and planned my shows came about by listening to him and other masters like Manjit Bawa, J. Swaminathan, and art critics like K.K. Nair. These discussions shaped my understanding of material, form and aesthetic in Indian art, a gift they shared with generosity and for which I feel blessed to this day.

“Looking back, my time spent with and around Husain sa’ab was the time when I saw an entire 360 degree change in the art world. Indian art was going global, and guided by such singular figures, we were an active part of this change.”

Husain sa’ab had been a friend to my family since the early 1980s. I first got to know him in the process of collecting his works. I have vivid memories of the time I spent with him, especially the long cups of coffee, lunches in London in the mid-80s. Those days he was working on the British Raj series commissioned by Tata Steel in Kolkata. I remember seeing him sitting in the British Library for hours. He said to me, “yeh mera riyaaz hai, padai hai,” meaning “this is my practice, my education.” 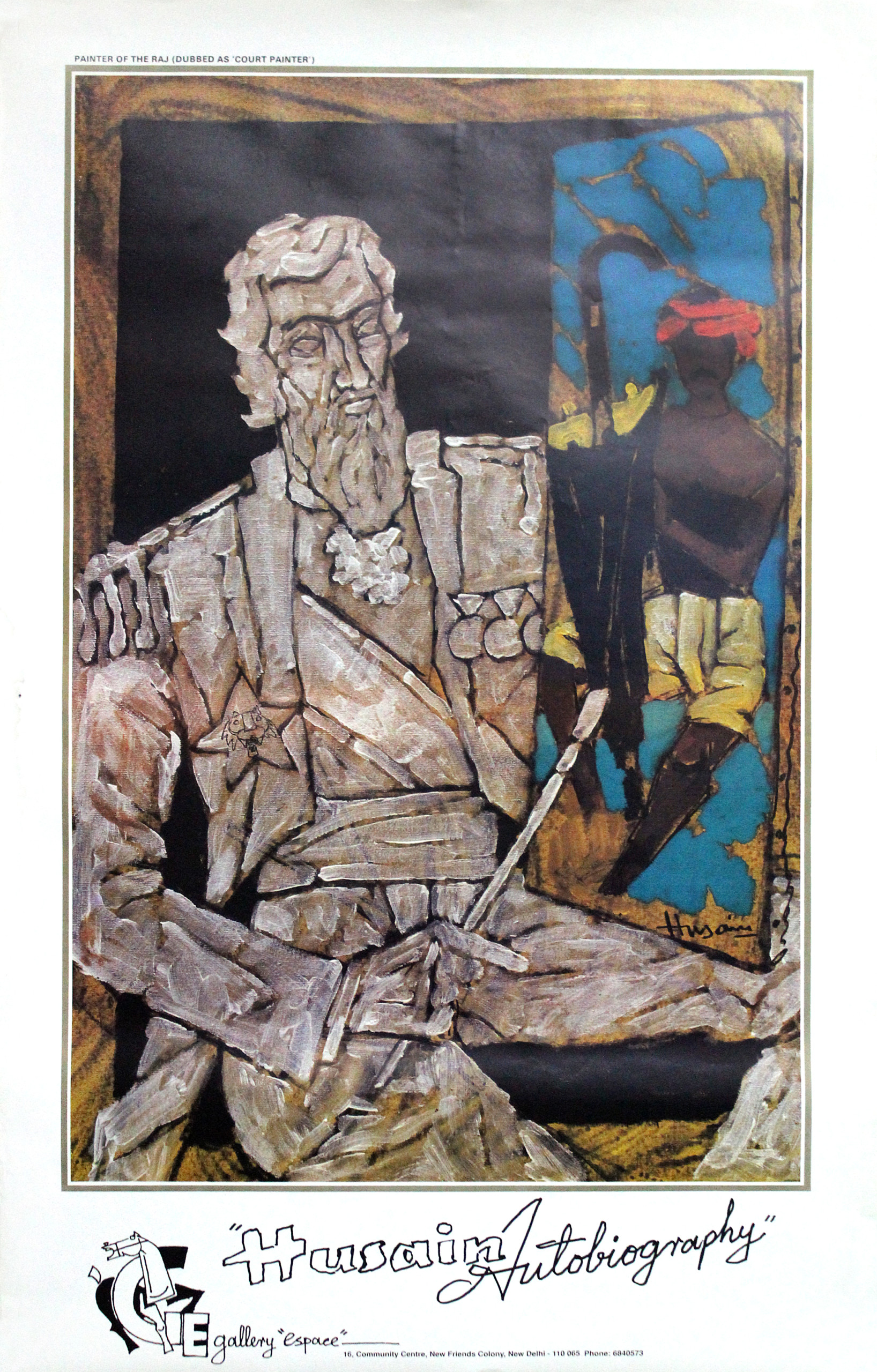 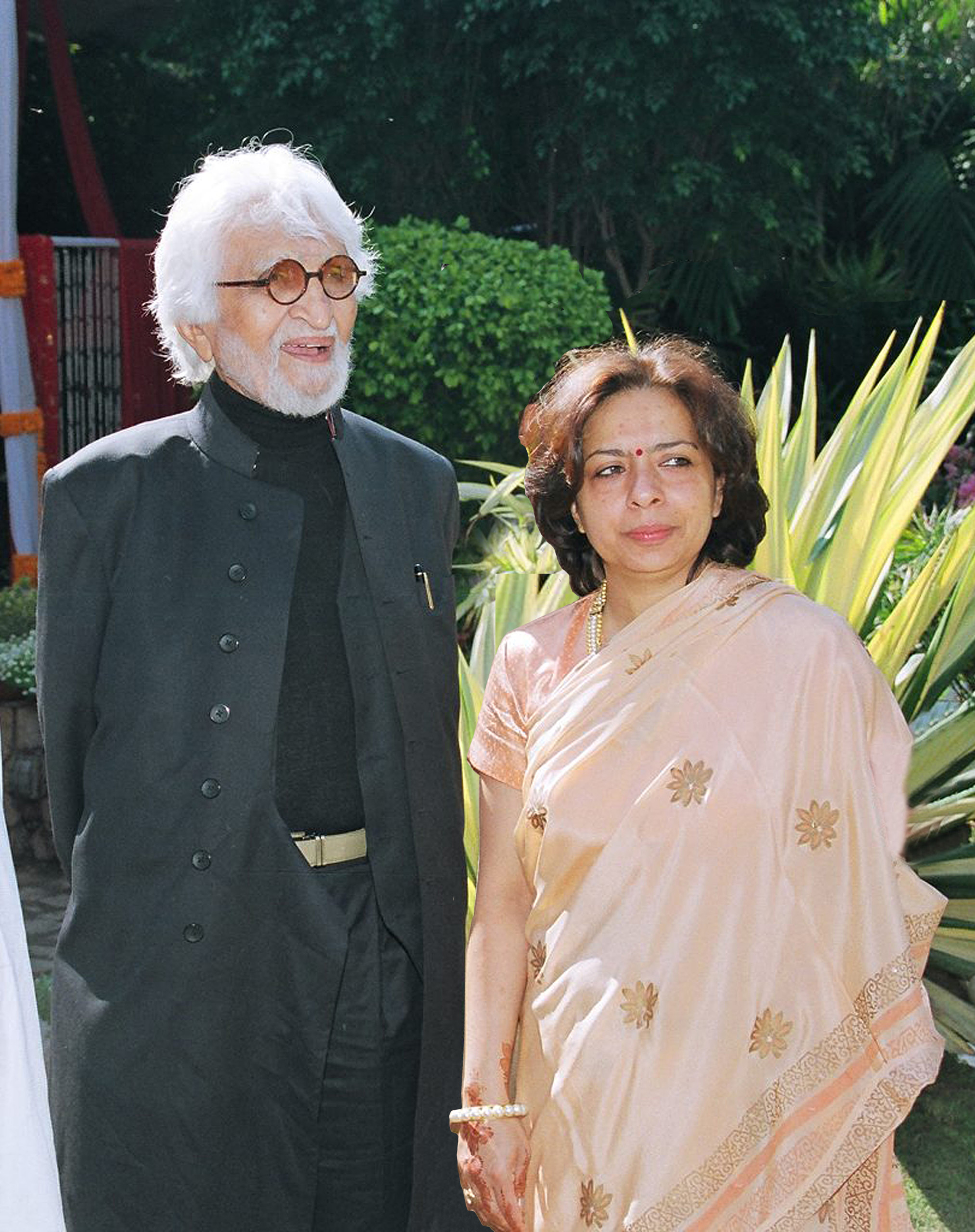 Top: A poster designed by Husain for the inaugural show at the gallery, including the gallery logo on the bottom left, featuring his signature horse head. Bottom: The artist poses with Renu Modi. Courtesy of Gallery Espace

Husain sa’ab made the designs for our house in 1985. My sense of line, form, space and light, all have come from seeing him at work. I would watch him show the contractor how to place the Jaisalmer stone on the walls — his hands moving rapidly and his face so animated. Once I asked him, “Why do you come and sit here for hours?” He replied promptly, “The marble is being laid and I know the house will come up beautifully, but it is the process that I enjoy so much. It is the means that matter to me and not the end.”

“Husain sa’ab made the designs for our house in 1985. My sense of line, form, space and light, all have come from seeing him at work.”

These conversations with him broadened my thinking about art, and led me to explore different mediums and formats of art-making. They were also the genesis of large-scale shows such as Drawing ’94, Sculpture ’95, Mini Print ’96 and The Self & The World, a women artists’ show that Gallery Espace organised and presented with National Gallery of Modern Art in New Delhi in 1997. The mediums we highlighted in these shows had not been explored by gallerists before and marked a shift in the way collectors started looking at art.

Looking back, my time spent with and around Husain sa’ab was the time when I saw an entire 360 degree change in the art world. Indian art was going global, and guided by such singular figures, we were an active part of this change. The art market continues to mature, most recently with technology becoming an integral part of the arts. These are exciting times to be part of the art world.

Gallery Espace, one of India’s leading modern and contemporary art galleries, opened in 1989 at the behest of M.F. Husain. Since its opening, the gallery has held pioneering exhibitions of Indian artists from Zarina Hashmi to Nilima Sheikh and Shobha Broota.