Before any critical framework could be evolved around Jangarh Singh Shyam as the originator of an extraordinarily individualistic idiom of painting, ruthless market forces came to dominate his art, and Jangarh himself became their first casualty. While trying to finish a large commission at Japan’s Mithila Museum in 2001, Jangarh committed suicide. He was just 40 years old.

A whole range of conditions, events and mediations associated with Jangarh’s life and practice have since remained a mystery. This short note is an attempt to provide a glimpse into the artist’s life, his phenomenal body of work, and the considerable legacy he left behind.

“The new, fathomless space of the white paper that Jangarh encountered served as a screen onto which he unleashed a whole storm of memories”

Jangarh once explained the story behind his uncommon name. “It was 1962 and I was born on the day when the officials of the Census Authority of India were visiting my village. The Hindi word for ‘census’ being ‘jana-gana’, I was named ‘Jan-gan’,” he said. Vernacularised as ‘Jangarh’, it is ironic that he remained forever a ‘vernacular’ artist.

Unlike other ‘vernacular’ artists, Jangarh’s muse was moulded at Bharat Bhavan, a multi-arts complex in Bhopal, where he arrived in early 1980s as a teenager on modernist artist J. Swaminathan’s prompting. Here, though subtly othered by the commanding presence of the art school trained moderns, Jangarh responded with a sense of elation to various new mediatory processes, such as the use of bright poster colours on the expanse of white paper, which led him to say, “The first time I dipped my brush in bright poster colours, tremors went through my body.” 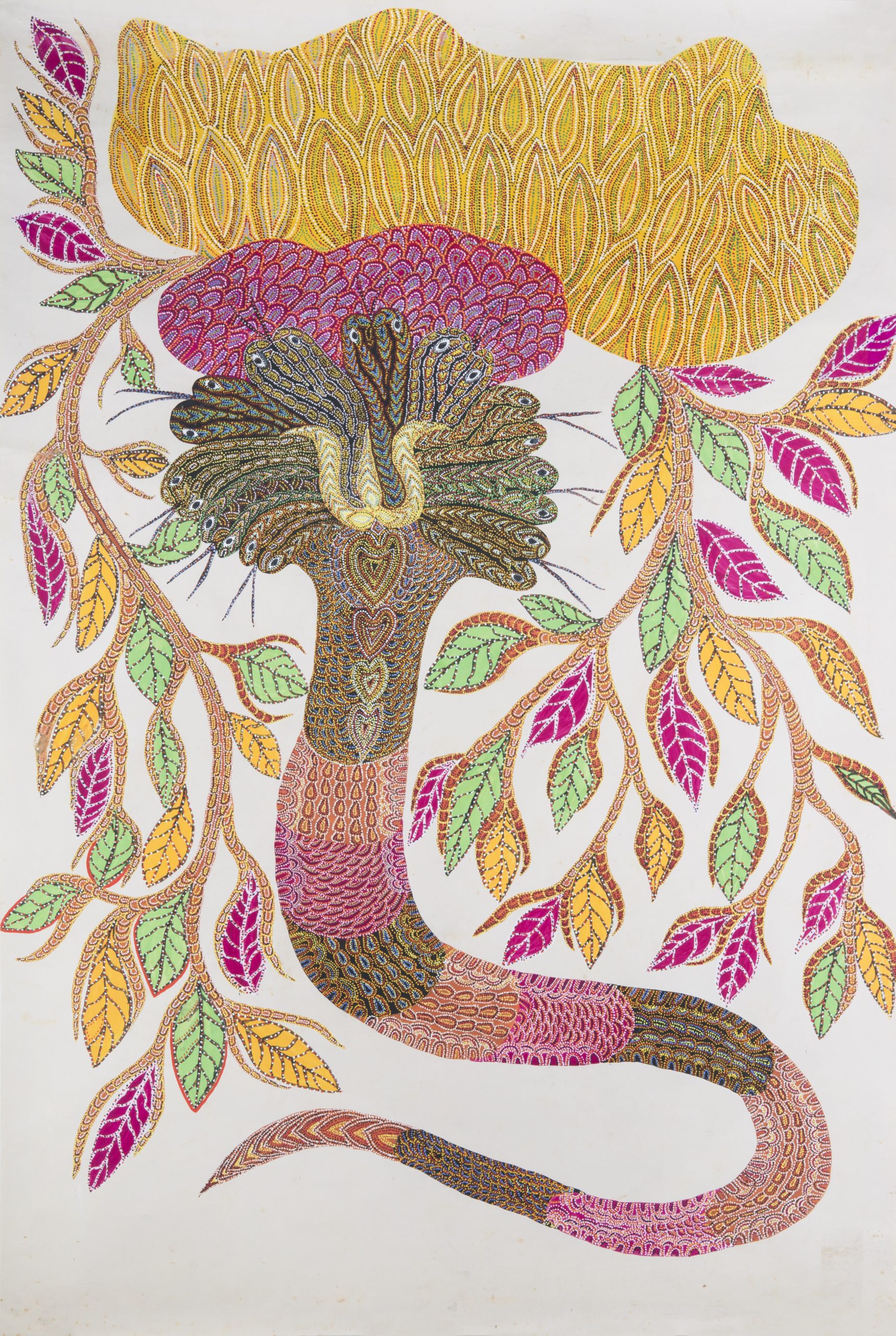 The Pardhan myth of creation, 1997. Pen and ink on canvas. Courtesy of Kavita Sanghi, Indore

The new, fathomless space of the white paper that Jangarh encountered served as a screen onto which he unleashed a whole storm of memories. Equipped with a powerful sensibility, and a profound nostalgia for the world of his native village of Patangarh, Jangarh created a sea of paintings inhabited by gods and demons, shamans and priests, birds and animals — including crabs, scorpions, lizards and crocodiles — as well as forests, trees and shrubbery. In just over two decades, the entire realm that had remained latent in his mind’s eye came to life in response to the new and alluring space of paper or the expansive walls that he turned into a vast and unique archive.

“The first time I dipped my brush in bright poster colours, tremors went through my body”

Folk and tribal artists working on paper as a surface often respond to a desire to tell their stories, inventing devices to convert the narrative time into a pictorial space. For example, to narrate the local legend of Draupadi and her five Pandava husbands, Jangarh created a series of scattered insets within a forested landscape on the canvas, on which he brilliantly unfolded the story of Goddess Parvati scoffing at a cow who was copulating with five bulls. For her mockery of this, she was cursed by the female bovine to be reborn as Draupadi, a woman married to five Pandavas. In another brilliant line drawing, he adopted the mode of a composite narrative, in which several episodes from the Pardhan myth of creation were intertwined into one wonderfully unified image. 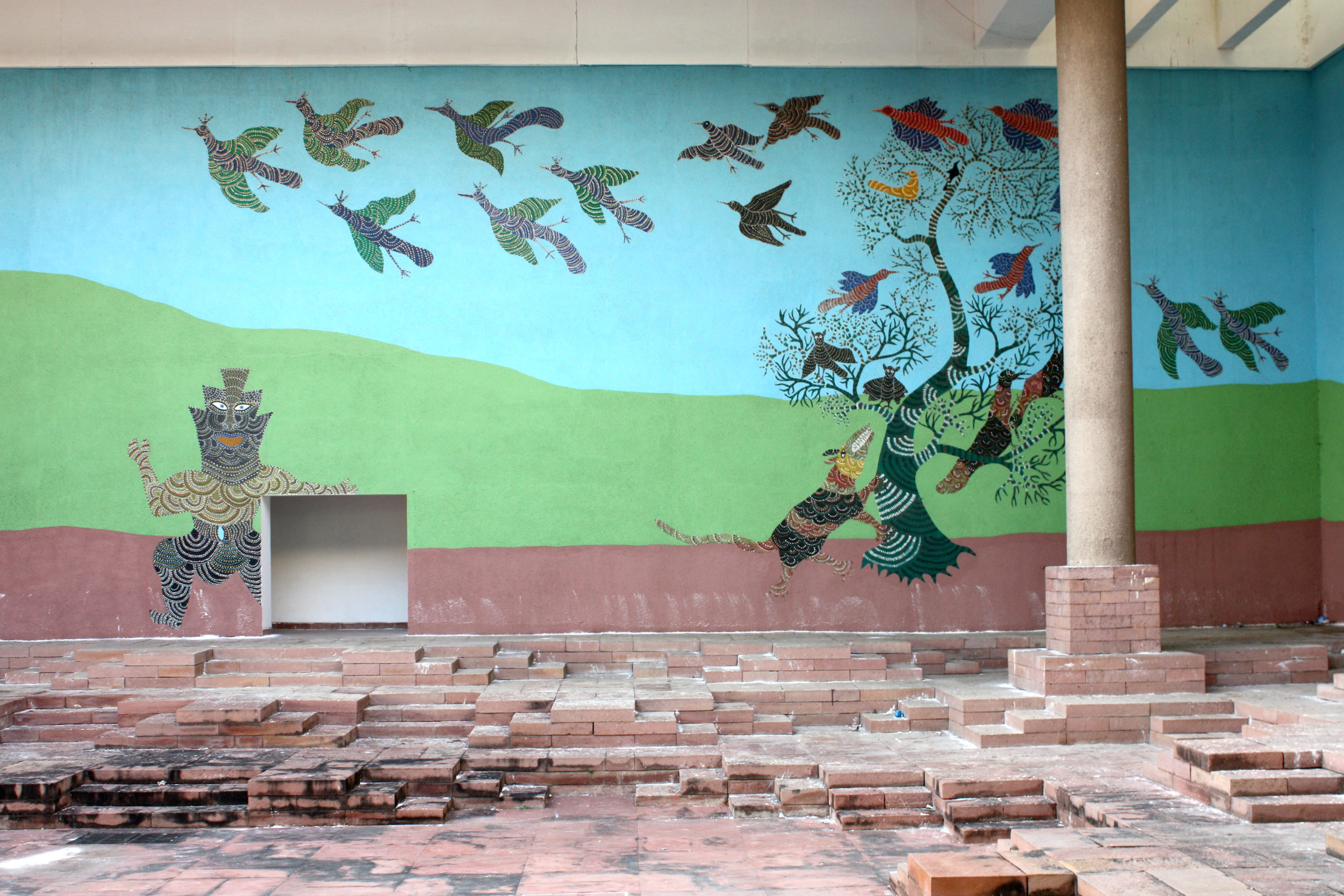 Detail of a mural at Bharat Bhawan, with colours being used to mark the sky, the forests and the earth and underworld, 1996. Courtesy of Jyotindra Jain

Today, the entire corpus of Jangarh’s work probes the efficacy of extra-cultural interventions on an individual tribal artist’s relatively well-grounded indigenous cultural tradition, and asks how the latter interacts with the new while intentionally reinventing itself.

He once narrated to me a heart-rendering incident about how an art gallery in Delhi had asked him to shun his ‘Western’ clothes in favour of a tribal image of him for their publicity brochure. It was as if his work would have the halo of authenticity only if he looked a tribal. Territories were neatly divided and crossing borders was hazardous. Jangarh got trapped in crossing.

Jangarh Singh Shyam was a pioneering contemporary Indian artist, born in 1962 to a Pardhan Gond family in the village of Patangarh, Madhya Pradesh. A recently published book by Jyotindra Jain, A Conjuror’s Archive, offers a rare insight into the life and works of the artist.