Warli artists and brothers, Mayur and Tushar Vayeda are expanding the definitions of folk and contemporary art with a practice that celebrates their community and ancestors. Meet the India Art Fair Artists-in-Residence through this film and download special artist posters below

Mayur and Tushar Vayeda work in the Warli village of Ganjad, Maharashtra, in a house that was once a community school run by their grandfather, Vasudeo Vayeda, and where the brothers were raised among the traditions and stories of the Warli community, the indegenous tribe from Western India to which the brothers belong. Today, the space is a full-fledged studio, a place for thinking and creativity for the artist-duo as well as a thriving workshop and learning space for other young artists in the community. “Our motivation has always been to bring back the deep history of this artform, practised by our tribal ancestors, generation after generation for thousands of years, for the young people of our community,” share the duo, for whom tradition and collective wisdom form the core of their practice.

To this end, Mayur and Tushar Vayeda’s work includes not just painting but also deep research into Warli traditions, mythological stories and rituals, and a translation of this knowledge to paintings that speak to the now. “We started working on Warli painting because we noticed that ever since the 70s and 80s, Warli art had become more and more commercialised and detached from its roots,” they explain. The resulting works range from classic to more experimental compositions including those of the village chowk or square, scenes of the night sky and the ocean bed, and have been part of many international exhibitions and projects all over the world including in New Delhi, Paris, Hong Kong, Brisbane and Fukushima, all tracing their origins back to Ganjad.

“We are trying to find lost spirits, the places where our people used to worship and where there has been the presence of energies”

Traditionally, Warli paintings are created on the walls of houses on special occasions like weddings using cow dung as the base layer, upon which repetitive geometric marks are created using white rice powder and bamboo sticks. Finding it “important and interesting to explore the possibilities of Warli painting without damaging its tradition”, the Vayeda brothers have largely stayed with these traditional materials, expanding on the varieties of cow dung and pigments used to create nuances of colour and texture in their work. In addition, for the works to travel around the world, they have adopted the medium of cloth canvas and paints as well. “Warli is a very minimal art form,” add the duo, about the ancient aesthetic born out of the everyday life and materials of its practitioners.

“The first and most important aspect of our work is to understand the knowledge that has been passed down from our ancestors. We are trying to find lost spirits, the places where our people used to worship and where there has been the presence of energies,” the brothers tell us, remembering the local forests where they roamed with slingshots as children and the sacred energy of these natural surroundings, many of which have disappeared today. It is in the motifs, themes and compositions of traditional Warli painting, “each telling a story,” that the artists are able to return to the spiritually laden mountains, forests and rivers, so central to their upbringing. By understanding the vocabulary of Warli painting, “the alphabet of Warli culture,” as the artists put it, they pay homage to where they come from, as well as find new forms to speak about their 21st century life — be it experiences in the city, with technology or even the destruction of nature.

“We always paint together, and it’s incredible to work in a community with other artists, our elders, old and new friends. It helps in bringing out the ancient passed-on philosophies and the stories of our people onto the canvas.”

“Finding new forms to depict modern life and our experiences is an exciting challenge,” the Vayeda brothers say, who see Warli as a living tradition, to which new motifs, symbols and forms have always been added. “There weren’t any characters for the ocean or marine life in Warli when we were creating artworks on an island in Japan, for example, and so we had to use what we already had to make something new,” the artists tell us about their time at the Awashima Artist Residency, Japan in 2019. The experiments are born  from freehand sketches by the artists who, in general too, do not overly plan or pre-sketch their canvases. “We sat by the ocean and just started painting,” they continue, “and after a while, we naturally came upon the forms that felt right, which we used then and continue to use now whenever we depict any scene involving the ocean or say a whale or an octopus.”

In Awashima Island as part of the Setouchi Triennale, the brothers also constructed a cave out of shredded government papers and newspapers and spent months painting the insides with stories from Warli traditions, reminiscent of the Bhimbetka Caves in Madhya Pradesh, the site of the oldest cave paintings in India. In the centre of the cave hung a giant whale skeleton, decorated with embroidery pieces created by residents of Awashima Island. “It was one of the most moving experiences,” the artists tell us. “To have people from all over come and sit inside the cave, watching us paint, laugh and cry while telling us about their stories about how the world has changed.” 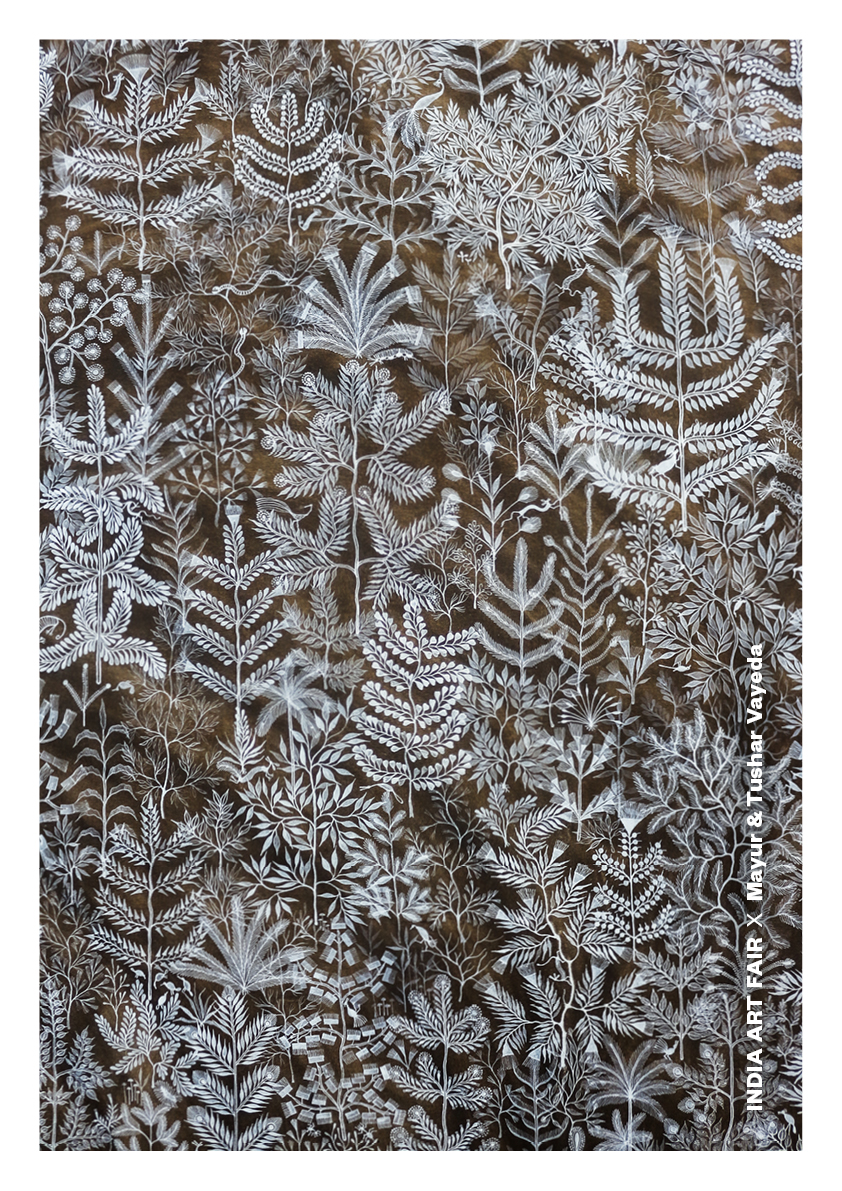 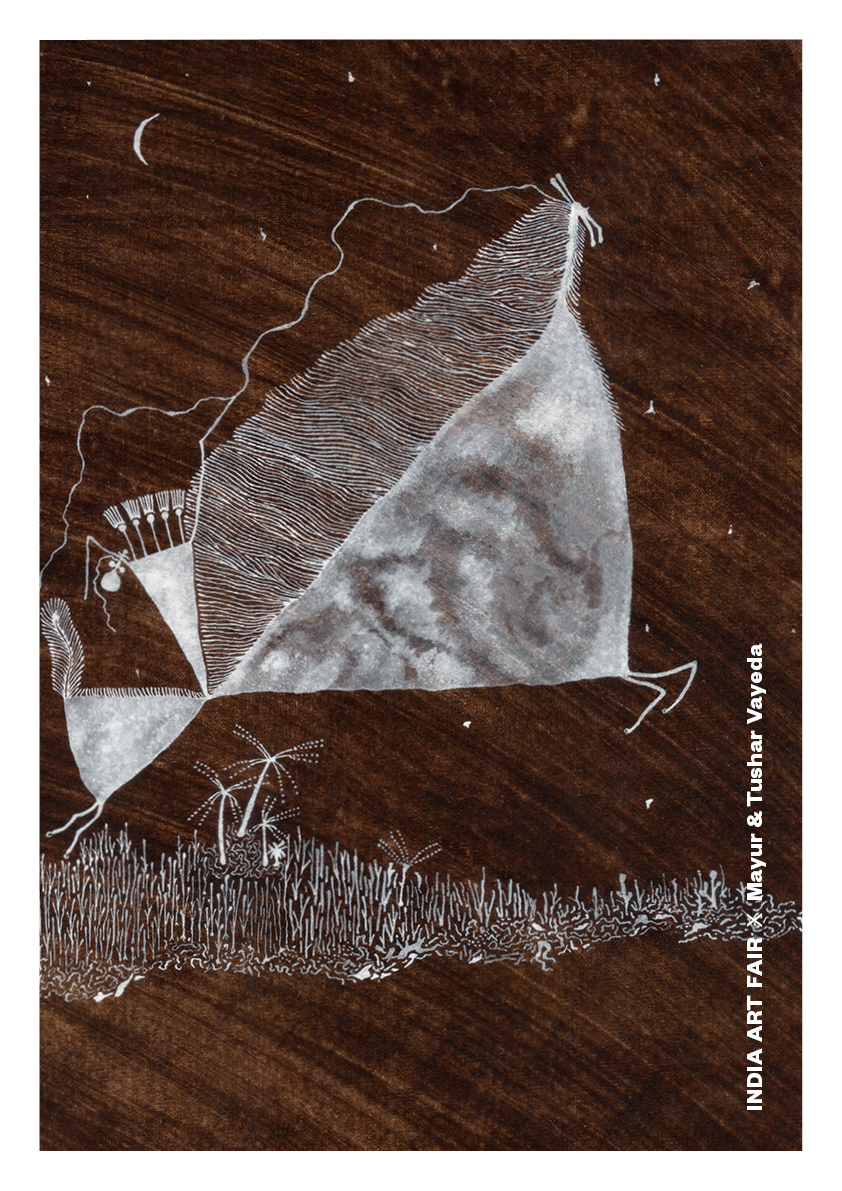 When asked about the meaning of ‘contemporary art’, Mayur Vayeda says, “To be honest, I still don’t understand the word “contemporary” exactly. For us, even when we are making something traditional, it is also totally contemporary.” In many ways, the Vayeda brothers have been working to broaden what Warli art looks like, with minimal compositions, “to express new stories using only a few elements,” yet for them, the most original and contemporary contribution they are making to art goes back to tradition. “We always paint together,” revealing the other ‘new’ aspect of their painting style, “and it’s incredible to work in a community, with other artists, our elders, old and new friends. It helps in bringing out the ancient passed-on philosophies and the stories of our people onto the canvas.”

One of the initiatives closest to the Vayeda brothers is to reinvigorate community interest in Warli art and culture, especially among young women, the traditional creatives of the community, many of whom have become regular part of their studio. Besides, the brothers have also started to dedicate much of their time to farming, and are working on a research-based project to reintroduce the native seeds of their region and promote a return to organic farming practices in the community. “Words like ‘sustainability’ are only new for the rest of the world,” the brothers say. “But for us it has always been a part of our philosophy. We only need to go back to it.”

Mayur and Tushar Vayeda were born in Ganjad, Maharashtra in 1992 and 1987 respectively. Their artist poster ‘First Forest’ is a contemporary retelling of the ancient Warli myth of creation and the god of five heads, known locally as ‘Pachshirya’.