Now 28, Debashish Paul grew up in Phulia village in Nadia, a spiritual hub of West Bengal, in a large family originally from Bangladesh, and among his sisters and sisters-in-law — sewing, stitching and playing dress up. “My village is famous for its handloom saris, and I used to collect the colourful scraps all over the fields and roadside to make clothes for my dolls,” the artist remembers. “There would also be kirtans or religious story-telling festivals on special occasions when I would dress up as Shiva, Sita or Radha. This was the beginning.” And then, he moved to the ancient city of Benaras, or Varanasi, in the heart of India, for his Masters Degree in Sculpture from the Banaras Hindu University in 2019.

Drawn to the ancient history of the two places, and motivated by an innate desire to express, he began by creating drawings of figures in other-worldly garments, which have over the years taken the form of ‘automatic’ performances featuring the artist himself. In each of these pieces, the artist creates a “ritual environment” in which the body and its expressions are most sacred. As he puts it, “When I am performing, I experience my body travelling towards mukti or freedom. The performance becomes like a malham or salve on my body, and through my movements, my body can transform into a landscape. This is what is needed for a body to survive.”

The vibrant life and spiritual energy of the city continues to fascinate and inspire the artist. “You see everything in Benaras — death, life, gods, people in the most amazing costumes,” says the young artist with enthusiasm, “I have no other job than art. Every evening, I go out to walk around the streets for two or three hours. This is my studio practice.” Indeed, the artist’s studio extends much beyond his room, into the expanse of people and creatures that call Benaras home — from the old sadhus or sages covered in holy colours to the dogs, goats and cows on the streets. “When I pass by these scenes, I experience the sights, smells and sounds which become part of my body and slowly, the ideas start building in my mind,” Paul explains, from whom queerness is much a way of looking as an identity.

“When I am performing, I experience my body travelling towards freedom. The performance becomes like a malham or salve on my body, and through my movements, my body can transform into a landscape.”

The turning point in Paul’s work took place in 2020 over the lockdown, a period when he was, in his words, “looking closely at myself and with concentration.” With the introspection came new experiments in his art, with the artist exploring textiles and sewing techniques, along with a newfound courage and determination to confront his desires, earlier thought of as taboo. “I had a desire to wear dresses, so I decided to make one for myself,” he says, simply, about the first of his now numerous ‘sculptural dresses’ made of painted fabrics and rice paper and with gender-less forms. 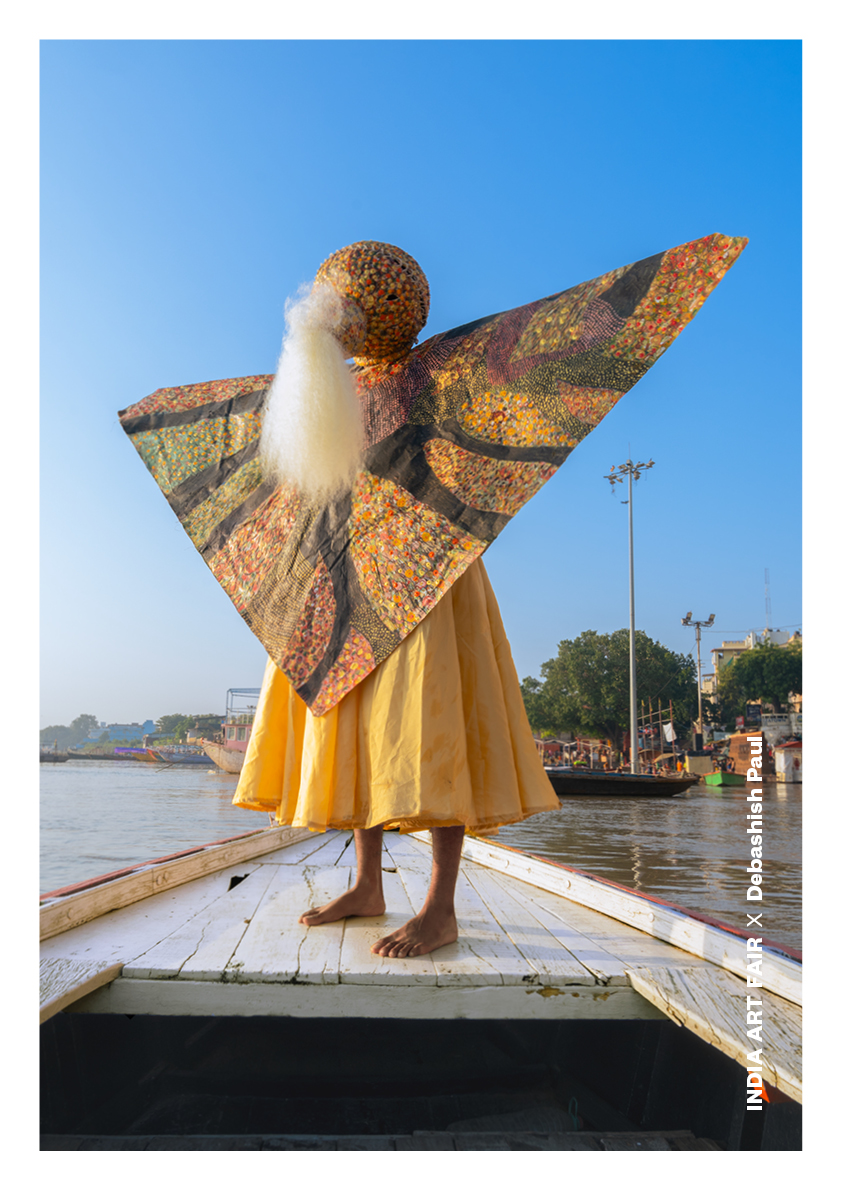 “It was an unforgettable experience when I wore the first dress,” the artist tells us. “When I enclosed my body in it, I suddenly felt like who I was inside, and at the same time, the childhood fear of being taunted for walking or talking like a girl came back to me — ki koi mujhe keh na de ki tum ladki ke tarah kya kar rahe ho — that someone may not accuse me of behaving like a girl.” Yet, determined to keep exploring the new medium and feeling, Paul continued to make the pieces, without shying away from opening up about his identity as a queer and non-binary person, not just to his audiences but also to himself. At core, the sculptural dresses have always been “reflections of the inner body” for the artist, with all its joys, pain and fragments. “The dresses make my body fold and unfold,” he says. “I am finding my queer body through the unfolding and folding of the materials.”

“When I first wore a dress, I suddenly felt like who I was inside, and at the same time, the childhood fear of being taunted for walking or talking like a girl came back to me. It’s as if I am finding my queer body through the unfolding and folding of the materials.”

In one of Paul’s recent and much-beloved performances, Beyond The Body and Gender, the artist wears a dress and helmet made of paper painted with graffiti-like marks and walks along the banks of the Ganga river with dozens of festive balloons, which, at the end of the performance float away into the sky. Like all his pieces, the performance was inspired by a memory and a story — in this case, from his early days in Benaras and his visits to the famous riverfront ghats for the evening aarti, the traditional ritual offering of fire to the Gods. “Every day, I would go to see one of the men performing the aarti,” the artist tells us. “And slowly I started seeing him as almost a God—sometimes as Krishna, sometimes Shiva — and developed a tortured love for him. I would imagine my body transforming into his and his face reflecting in mine. That is why I am holding the balloons in the performance, to think about what it means to hold a body or to release it. There is a certain silence in the performance.”

Debashish Paul uses his art to express his innermost desires. A performance is a process of transformation, as he calls it, in which his body becomes “a door to freedom.” The artist is currently working on a project about imaginary friends, Me with My Pets, for which he is creating new sculptural dresses, devising new performance-based videos, including experiments in photography and watercolour drawings as well.

Debashish Paul was born in 1994 in Phulia, West Bengal and is now based in Varanasi. His work will be showcased at India Art Fair 2023 as part of the Artist-in-Residence programme.