I first got to know about Manjit Bawa when I was still in school in the 1980s through the pages of the Illustrated Weekly of India. The centerfold on art and artists of the Weekly, then edited by Pritish Nandy, was also how I learnt about the work of F.N. Souza, M.F. Husain and all the great Indian artists at the time. Amongst all, Manjit’s paintings stood out to me with their flat backgrounds of colour and singular figures floating in that space.

Around 1985, I decided to go meet him at Garhi, an artist’s studio complex in New Delhi with a thriving community of artists and where Manjit had set up a prized printing facility. However, Manjit wasn’t there that day, so I left him a note. That summer, I decided to stop by his studio again. I was on my way back home in Kolkata from my boarding school in Dehradun for the holidays. This time he was there and we started talking about art and our growing interest in it. 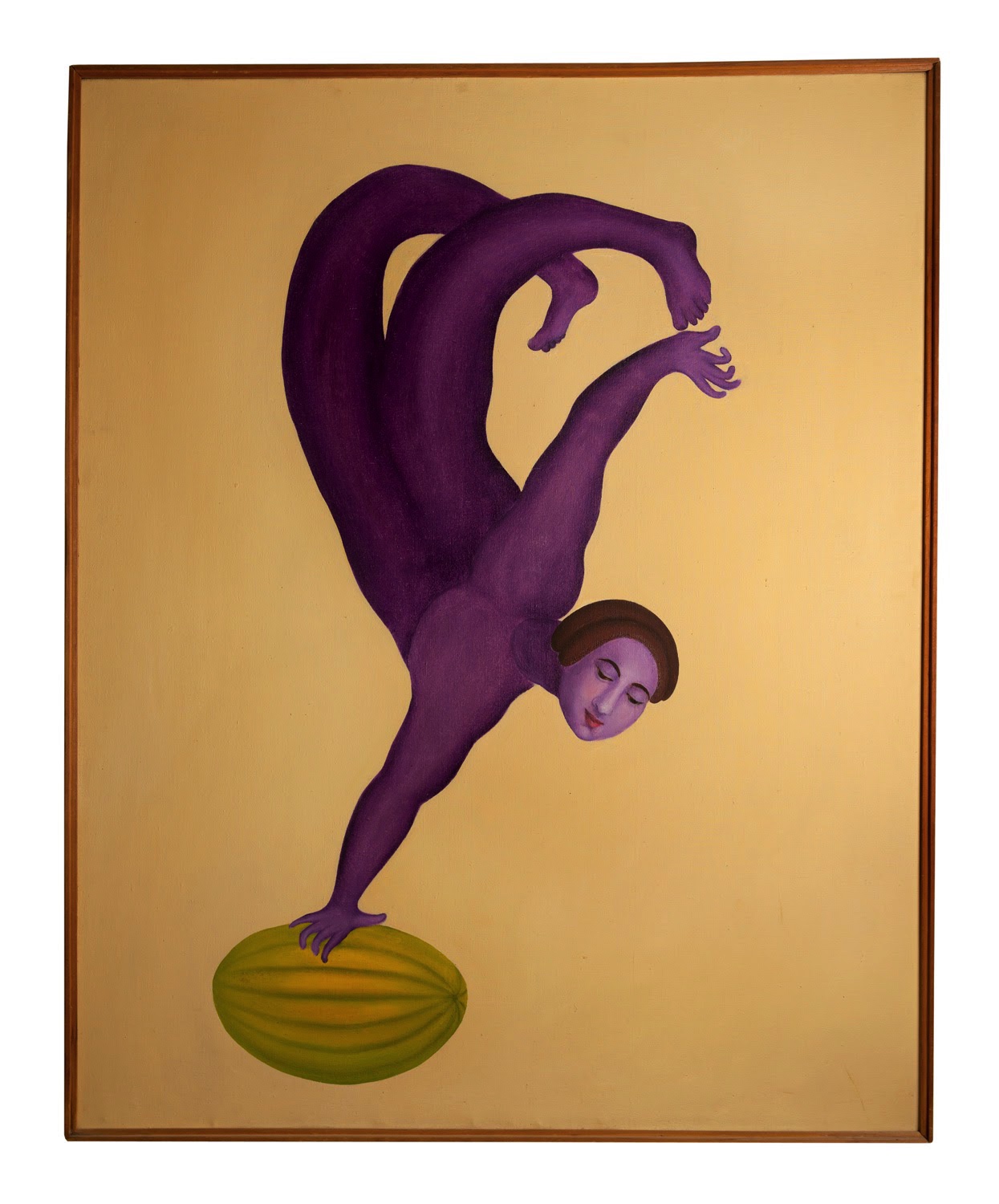 I referred to Bawa, who was around 45 at the time, as Bawa Saab, or Bawa sir. About 15 to 20 minutes into the conversation, he said “Bandh kar yeh Bawa saab, Bawa saab, call me Manjit.” [“Stop with this Bawa sir, Bawa sir, call me Manjit”]. A little taken aback, I told him I would instead call him Manjit bhai, or brother. He suddenly stood up, and I assumed it was to show me a painting or pull out a catalogue. Instead, he just stood and stared at me. After almost twenty seconds of staring at each other, when I asked him what the matter was,he replied, “Kamaal ka aadmi hai. Bhai bulaya aur gale nahi milega?” [“You amaze me! You call me a brother, but won’t even give me a hug?”]. He immediately embraced me and it was completely spontaneous; It felt so warm and genuine, and that is just who Manjit was to me. We spent another half an hour together talking, and before leaving I said, “Manjit bhai, please remember you have a home in Calcutta.”

“He not only introduced me to artists and their works on these trips, but also taught me how to look at art. He was in a way my guru, teaching me and training my eye as a collector. It was thanks to his introductions and training that I ended up with many artists as friends and picking so many great works along the way.”

A week later, I was at home in Calcutta, when I got a call saying that a sadhu baba, or a monk, had come to the gate and was asking for Mr. Poddar. I initially thought it was someone for my dad, but I was told that the man had mentioned my name. I reached the gate only to find Manjit sitting in the waiting room. Again taken aback I asked, “Manjit Bhai, how come you are here?” He said, “Kamaal ka aadmi hai, bola mera ghar hai, so then why do I have to inform you before coming?” [“You amaze me! You told me this was my house, so why do I have to inform you before coming?”]. Once again, he gave me a warm hug and said that he had come to see me and spend time at his new home in Calcutta. He had absolutely no agenda, and for the next three days, we talked about art, went to meet artists, saw several exhibitions, and simply had a great time. He continued to make such trips for several years. 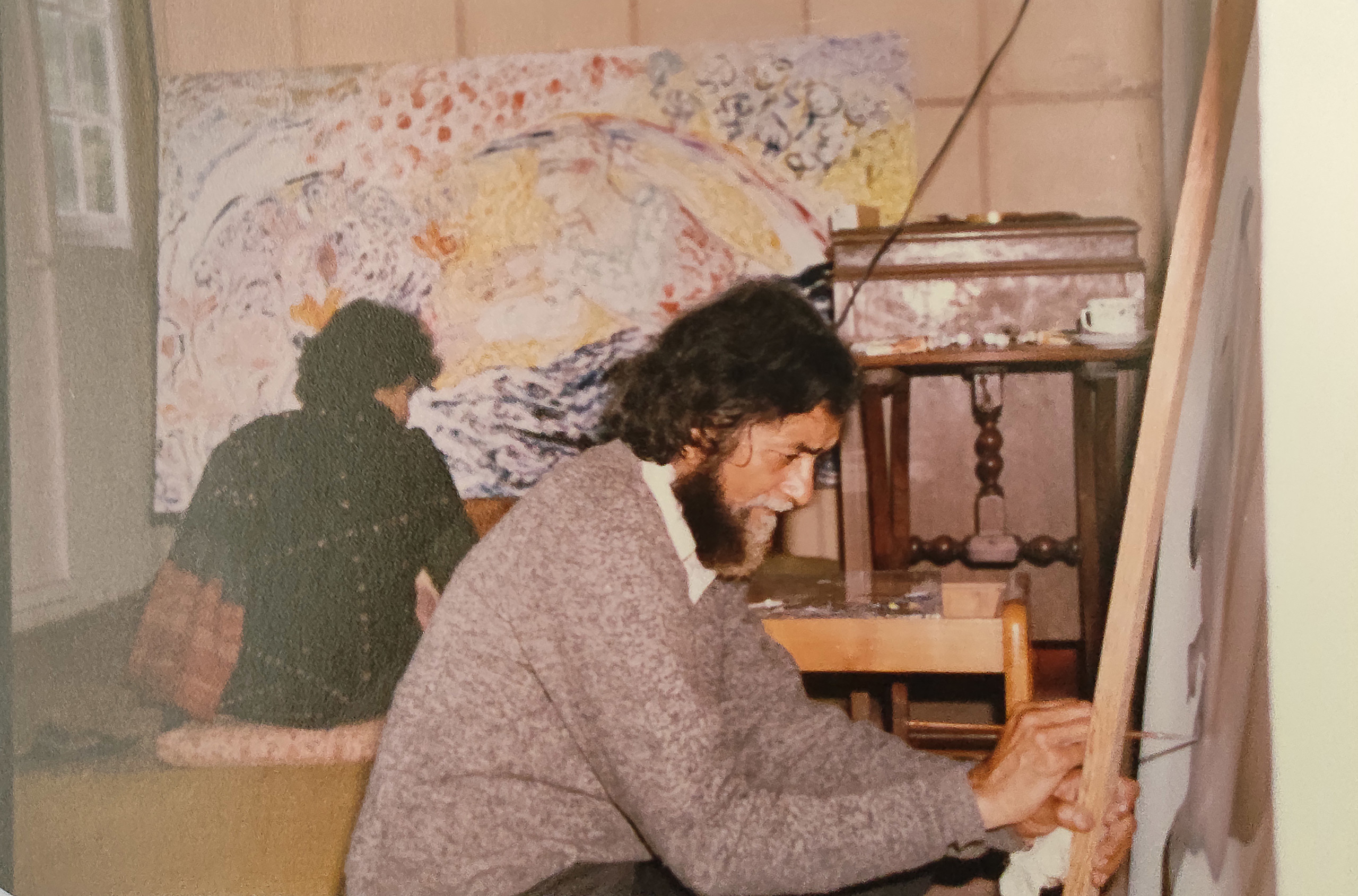 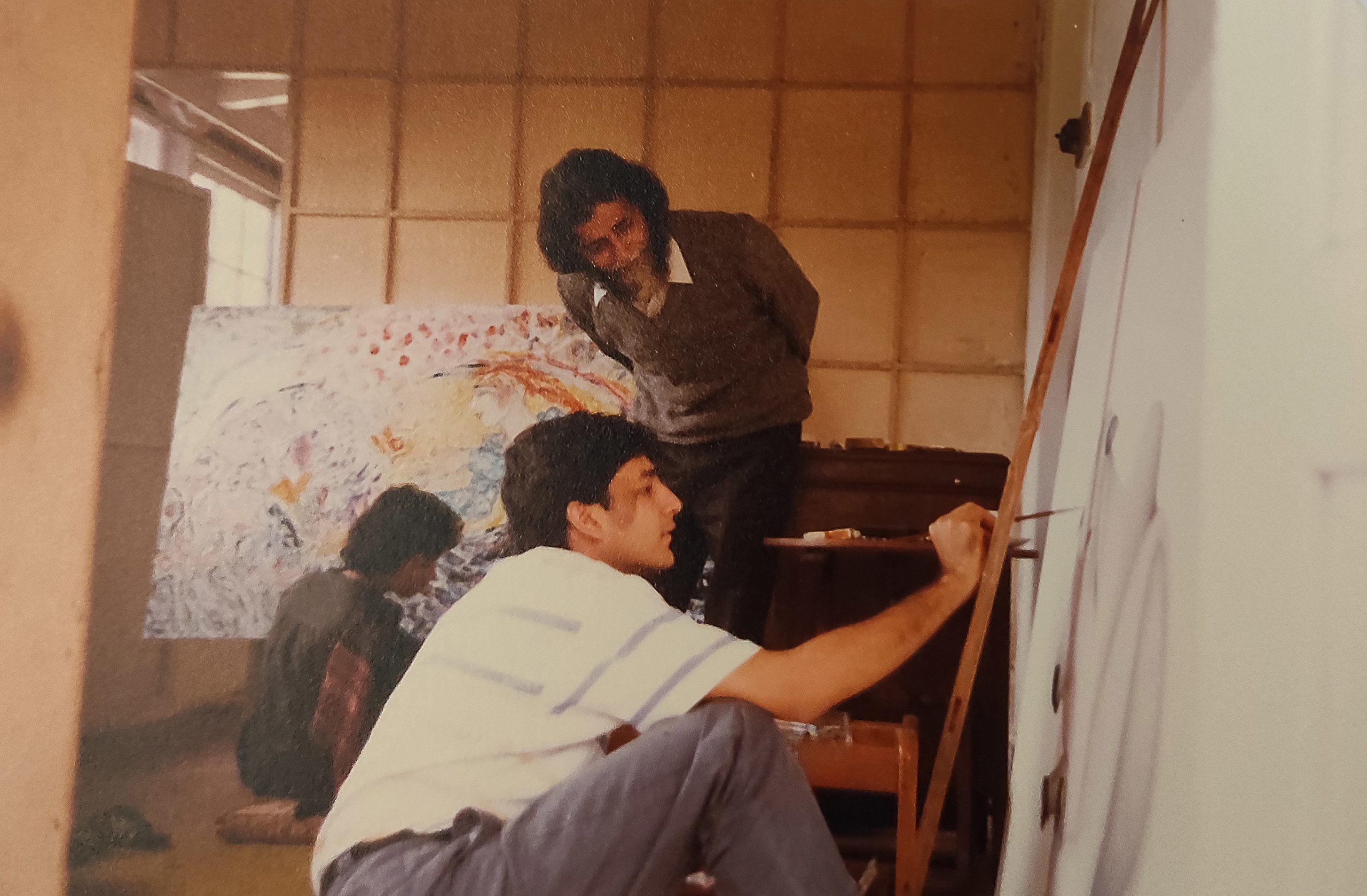 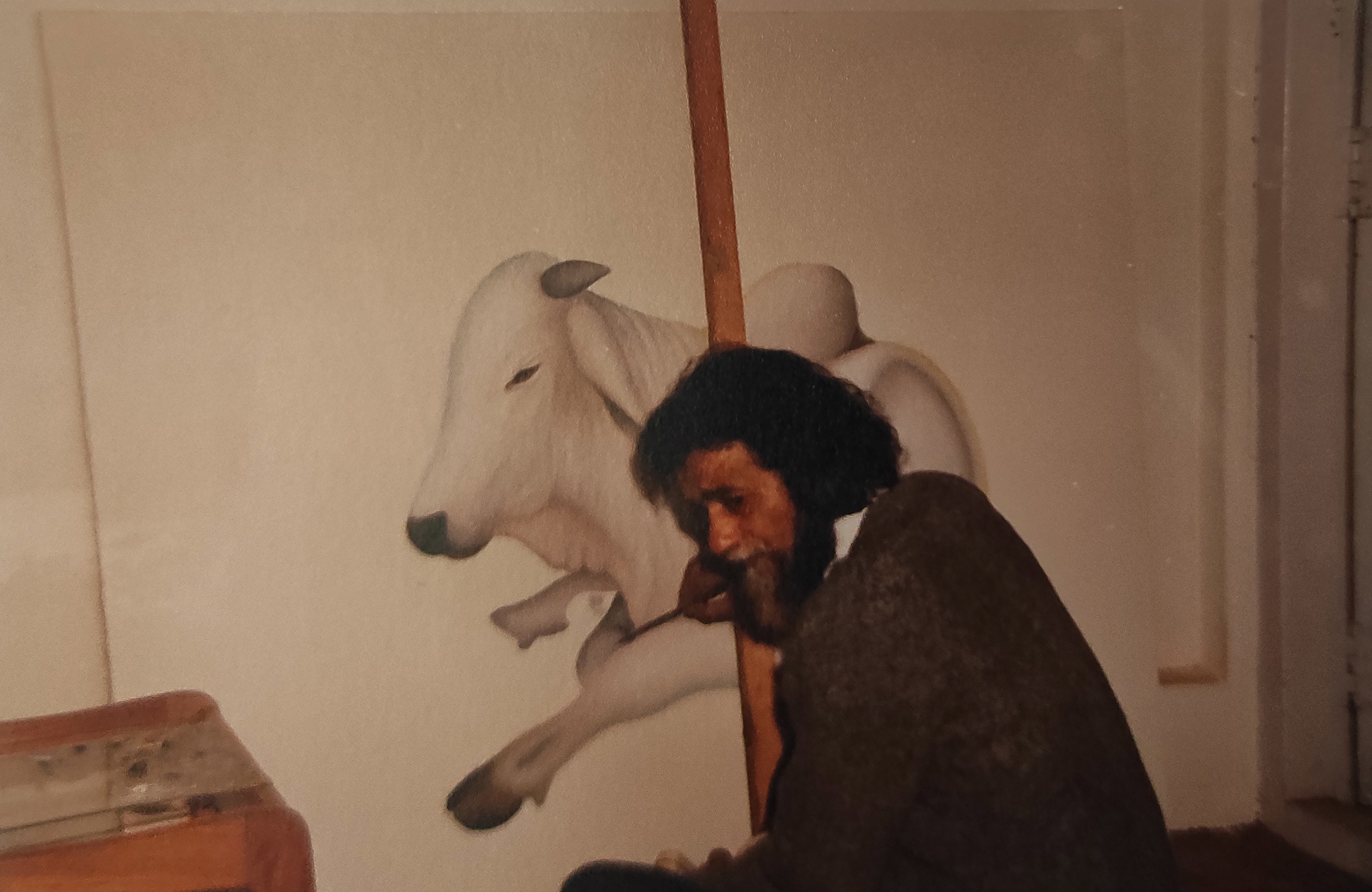 Abhishek Poddar and Manjit Bawa painting a canvas in Coonoor at the Coonoor Art Retreat, 1989. Courtesy of Museum of Art & Photography Bangalore

We would meet whenever I was in Delhi and we would also travel together to Varanasi, Coonoor, Kolkata, Mumbai, Hyderabad, Ahmedabad, Dalhousie and other Himalayan towns. He not only introduced me to artists and their works on these trips, but also taught me how to look at art. He was in a way my guru, teaching me and training my eye as a collector. It was thanks to his introductions and training that I ended up with many artists as friends and picking so many great works along the way. He took me under his wing, and truly made me feel like his younger brother.

One day, he took me to his mother and said, “Dekh, tere se kaun milne aaya hai?! Calcutta se mere chhota bhai aaya hai.” [See who has come to meet you? My younger brother from Calcutta!”]. Not only was he my mentor in art, he became family. Later, he came and danced at my wedding, and was even there when my son Aman was born. In fact, when Aman was little, he would sit in the room while Aman was sleeping and would just play the flute so that the “music goes into his system.” Manjit was a fantastic flautist.

I remember visiting him in the hospital after he had a stroke when he said, “Abhishek, take me away from here otherwise they’ll never get me out.” That was the last time I met Manjit when he was in his full senses. Although we met many times thereafter, he was in a coma and I do not know how much he knew of those visits or whether he even recognised me. And while it was painful seeing him in that condition, and losing him in December of 2008, I will always remember him for the Manjit that he was: vivacious and full of life, my guru, my brother and friend!

Abhishek Poddar is one of India’s foremost collectors and the founder of the Museum of Art & Photography, Bengaluru, set to open physically in 2022.