The artist opens up about her many wonderful worlds — the imaginary ones she creates on paper, and those that she inhabits through travel, map-making and myth

Why travel?
As clichéd as it may sound, travel is really the best way to open your mind, explore something new, and get a fresh perspective. The thing that has struck me the most as a traveller is the way people tell stories and record their histories. I’ve found the same themes recurring in multiple places. It’s evidence that we are all not that dissimilar after all! I try to learn as much as I can from all the places I visit and carry this mythic commonality or collective storytelling into my own work.

Do you find commonalities between home and abroad — wherever home is for you?
My interest in the links between cultures stems from a combination of having grown up in India, studied in the United States, travelled extensively, and finally settled in Europe. I’ve been lucky enough to witness so many diverse ways of life over the course of my journeys. Both Europe and India have such a mixture of different traditions; it has helped me to see parallel stories everywhere. The history of myth shows links between cultures that are not often highlighted in classical or academic histories of the world. 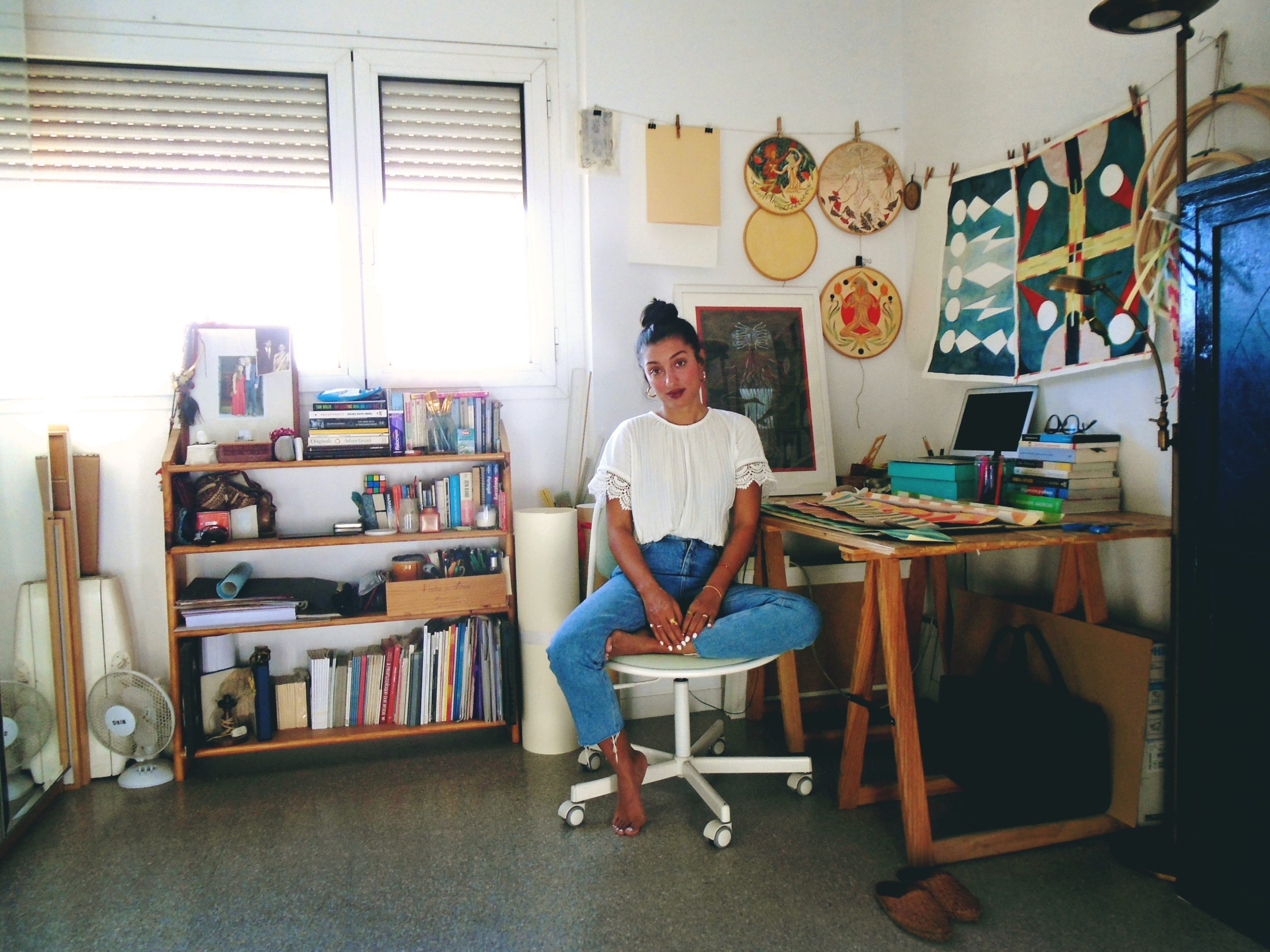 Rithika Merchant in her Barcelona studio, 2019. Courtesy of TARQ Mumbai

Why do so many of your artworks represent the idea of voyage?
I have always lived by the sea, and this explains why I’m drawn so intensely to the idea of voyaging and what it represents. Because I grew up in Mumbai, right on the coastline, my relationship to the sea is both mental and visual. Now, living in Barcelona, my relationship to it has become much more physical. The sea represents infinite possibilities and I begin to feel quite claustrophobic when I don’t have this wide expanse of water near to me. Where the land ends, new possibilities begin.

Why the fascination with maps and celestial charts?
What I find most intriguing about old maps and celestial charts are the ways in which they are folded and stored. In my own work, I usually fold the paper before I begin drawing; then, after I finish the painting, I double it back up along the same creases to store it. Often, I am able to fold it into a smaller geometric shape, so the painting turns into an object. In this way, the paper itself becomes part of the narrative or journey.

These maps and charts were traditionally made using water-based paint on paper, which also happens to be my medium of choice. I love watercolour because when you work with it, you kind of have to mean it. You can’t paint over it or take it away. There is a finality that comes with it that I really like. Aesthetically, I also like that it looks less saturated, more faded, and sort of translucent, like in old maps and botanical drawings. I enjoy colour that looks like it has been exposed to the sun and the way paper and ink looks after it’s been folded up and put away for a long time.

I like to imagine that one day in the future — just as we have in the past — someone might come across my folded drawings in a book or in a drawer somewhere. And when they unfold them, they would find this strange and otherworldly map, with creatures and clues from another time. 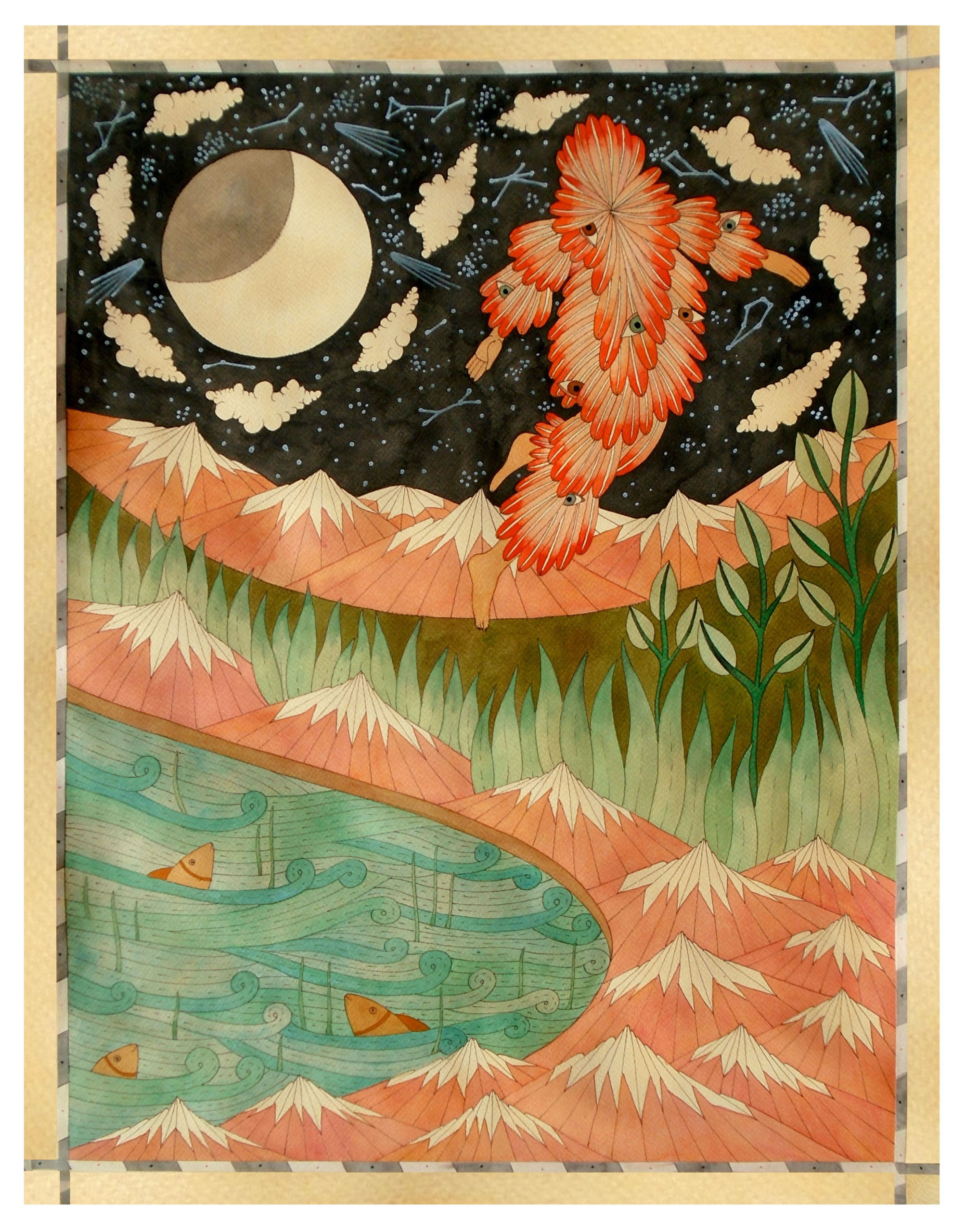 Freedom to Explore, 2019. Watercolour on paper. Courtesy of the artist and TARQ

What is the relationship between your paintings and mythology?
Most cultures use imagery to tell stories and represent ideas. I have always been very interested in Indian myths and iconography, especially the way in which different mythological fragments are woven together to form a complete image or narrative. I try to harness these ancient means of storytelling to voice my contemporary context.

In the past, stories were a way to make sense of natural phenomena and psychological events. In modern times, and for the foreseeable future, it is science that provides a complete explanation of most things. However, as much as science gives us a more accurate understanding of ourselves, it also strips us of our individual perspectives and imaginations. Above all, it takes away our spiritual power to understand our own destinies. Myth-making brings humanity and our relationship with the natural world back into the centre of enquiry.

“I have felt utterly helpless watching the European refugee crisis unfold right on my doorstep.”

Is there a political dimension to your artwork?
Much of my work is a response to what is going on in the world around us. The mass displacement, forced migration and exile of many groups of people is very troubling to me. Living in Barcelona, I have felt utterly helpless watching the European refugee crisis unfold right on my doorstep. My show at TARQ in 2017, Where The Water Takes Us, dealt with the profound effect this had had on me. So yes, the aesthetic dimension of my work goes hand in hand with its political content.

I have always seen stories and ideas visually and always felt compelled to bring these visions to life. I will often read or experience something and then have a very vivid image appear in my mind. Sometimes it’s just a flash. Manifesting these ideas comes naturally to me. I have my own lexicon of symbols and creatures that I use as tools to help me translate these mental images onto the space of paper.

Where in the world would you like to travel to next?
I would love to explore more of India. I went on a lot of cross-country family trips by road and train as a child but have not really done that much as an adult. India is so large and varied, and it is changing so rapidly too. I would definitely like to see more of it.

Born in 1986, Rithika Merchant divides her time between Mumbai and Barcelona. Since graduating from the Parsons School of Design in 2008, she has held several solo exhibitions across the globe and is represented in India by TARQ.