One of India’s most prominent patrons and collectors of contemporary art, Sangita Jindal looks back at a life shaped by great art and artists

My journey with art is inextricably intertwined with my journey as a woman. As a child, I remember being surrounded by works of art at home, and sitting in on conversations between my mother, Urmila Kanoria, a champion of the arts and the many inspiring architects, designers and artists with whom she worked and who always happened to be around the house. My mother started the Kanoria Centre for Arts in Ahmedabad in the 1980s – a space she founded with the guidance of architect B.V. Doshi which enabled a host of creative minds and practitioners to come together and learn from each other in an interdisciplinary setting like never before.

India’s greatest living architect Doshi sahab also had an abiding influence on my way of looking at the world. My conversations with him imbued in me a deep understanding of the social and communitarian bases of architecture. If my mother gave me my sensitivity to colours and forms, my understanding of space was enhanced thanks to Doshi sahab. I also realised the crucial relationship between artworks and the built spaces that house them. Later in life, when I took on the task of renovating monuments like the Chandramouleshwara temple in Hampi, the Keneseth Eliyahoo Synagogue and the Sir J.J. School of Art in Mumbai, and the Shalimar Gardens in Kashmir, among other great heritage buildings, my discussions with him guided me greatly. 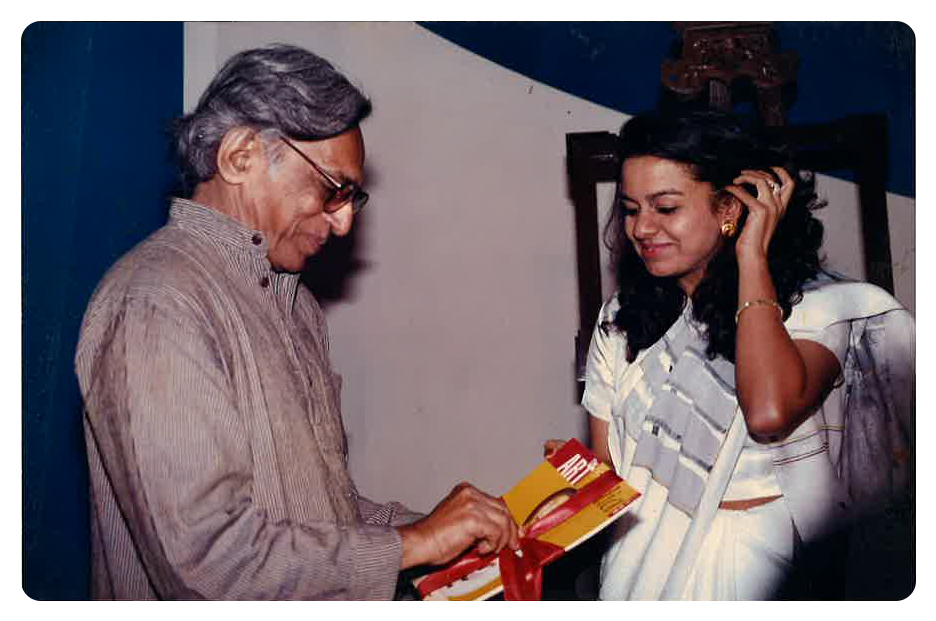 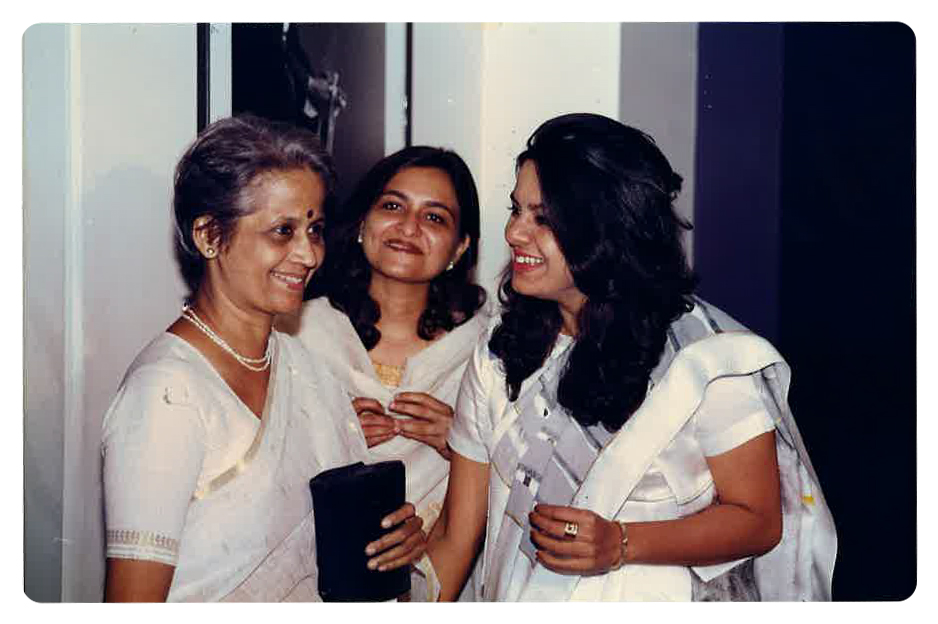 I moved to Mumbai after my marriage in 1984, where I set up the Jindal Arts Creative Interaction Centre (JACIC) at the National Centre for the Performing Arts, with the support of Jamshed J. Bhabha. The brother of the renowned nuclear physicist, Homi Bhabha, and a great patron of the arts himself, Jamshed J. Bhabha was well-versed in a variety of subjects and had an eye for acts of creative exploration. He was a staunch believer in the power of art to instruct and uplift human beings, and in its ability to help us get in touch with our higher selves. I also set up the ART India magazine in 1996. The magazine, which started as a space for critical discourse on diverse art forms has evolved into one of the leading arts publications in South Asia, 25 years since its first issue came out.

“Art has a special way of healing you. I realised this with a painful sharpness in the last couple of years as the pandemic played havoc in our lives.”

Over the years, I have had the privilege of meeting a constellation of artists, from the iconic M.F. Husain to the acclaimed British Indian artist and sculptor Anish Kapoor, from painters like Atul Dodiya to Suhasini Kejriwal. For me, Husain sahab’s horses have been emblems of freedom, whereas Raza sahab’s geometries have opened up a way of diving deep into myself. These artists, many of whom formed the artists’ group known as the Bombay Progressives, continue to hold a special place in my heart. They captured the innermost human realities with such ease and simplicity, and put modern Indian art on the world map. 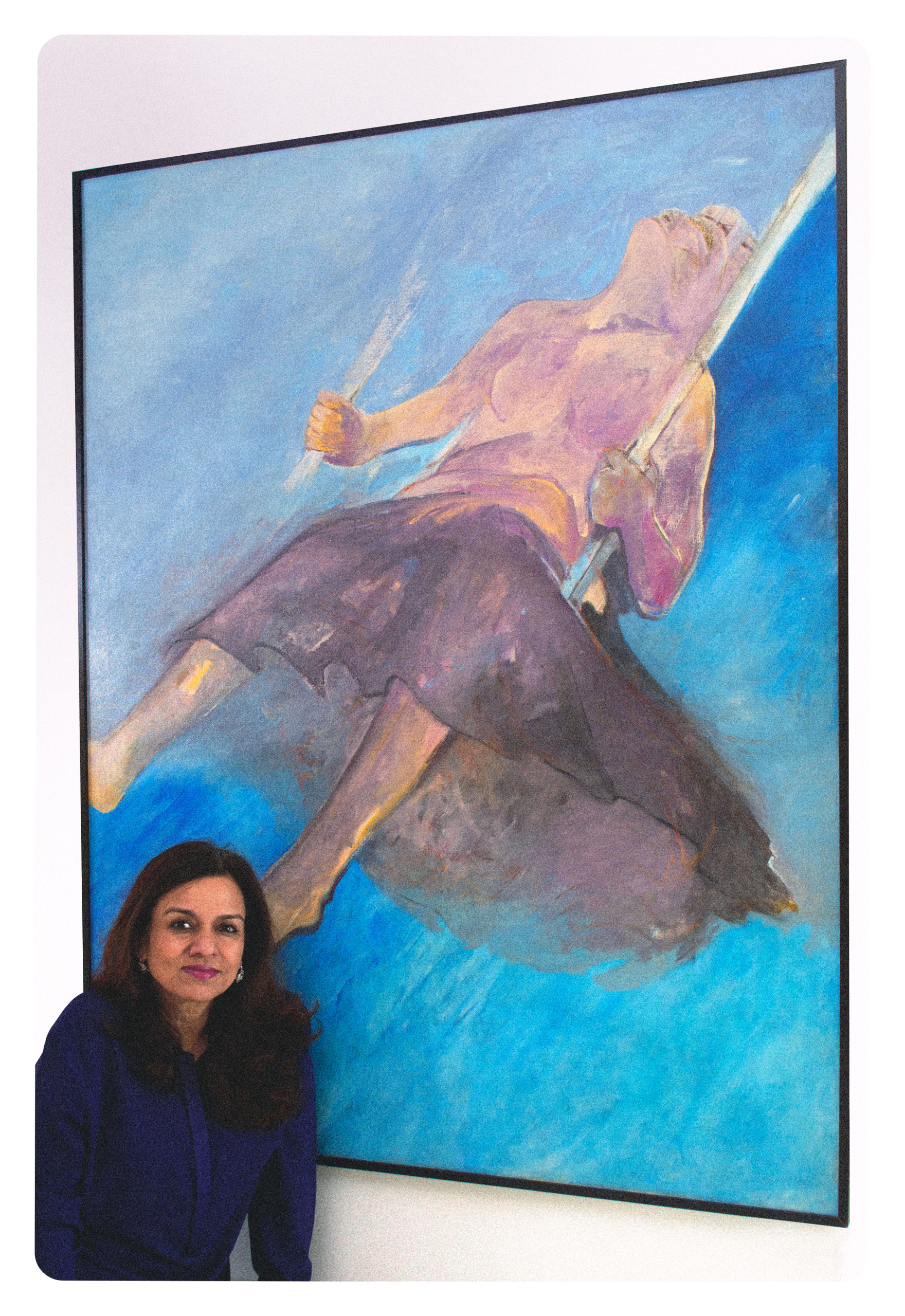 Sangita Jindal with Krishen Khanna’s Girl on a Swing. Courtesy of JSW Foundation

Art has a special way of healing you. I realised this with a painful sharpness in the last couple of years as the pandemic played havoc in our lives. In fact, I have returned to one painting over and over again, Girl on a Swing by the great Krishen Khanna, which to me has come to represent the capacity in all of us to rise against adversities and soar high up into the unknown. The life lessons that I have received thanks to the exposure to art have helped me grow in different intense ways – intellectually but also emotionally and spiritually.

Chairperson of JSW Foundation and President of ART India Magazine, Sangita Jindal has led important conservation work for some of India’s architectural gems and heads one of India’s premier art publications featuring modern and contemporary art.